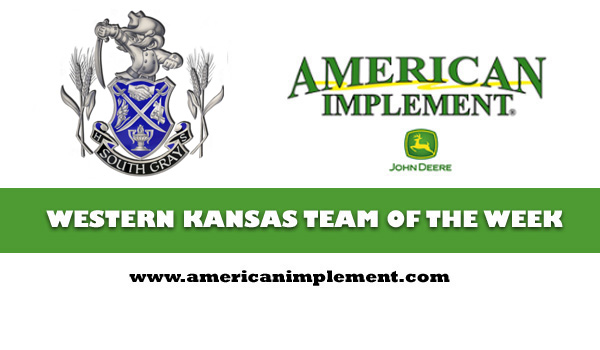 In track, the Rebels were sixth in 1A with 34 points in 2018. Thus far, South Gray has delivered several solid showings with many of the key basketball players and could yield another jump this spring.

At the 11-team Stanton County meet on April 2, the Rebels won with 123 points, 19 more than Syracuse. South Gray boys, which took significant graduation losses after back-to-back 1A state track titles, was fourth with 81 points. Stanton County captured the boys’ side with 128.83 points.

Last spring, the South Gray girls’ 1,600-meter relay team took sixth at the 1A state meet and had three non-seniors with Emma Jantz, Megan Tarn and Christy Wiebe. Last year, Jantz and Wiebe were sophomores, and Tarn a freshman as the Rebels ran 4:18.72.

As well, the 3,200 relay earned second with all non-seniors: Wiebe, Jantz, Tarn and Elizabeth Thiessen, a freshman last year. They posted 10:25.44.

At ’18 state, Askew was tenth in the shot put with a mark of 33-10.25. This year, Askew was second at the Stanton County meet with a throw of 34 feet. Sublette senior Mercedes Martinez was 11 inches better to win the competition.

Peters, who did not qualify for the state meet last year, has shown a nice improvement and has thrown the discus 114-8, which is currently third-best in Class 1A, according to Kansas historian Carol Swenson’s statewide leaderboard list.

Last year, Torres qualified in the state shot put but did not place. In the javelin, she was state runner-up to Centralia’s Madison Lueger, one of the top javelin throwers in state history and a Nebraska signee.

At the SC meet, Croft and Wiebe finished 2-3 in the pole vault with marks of eight feet and 7-6, respectively.

In basketball, South Gray improved from 13-8 to 21-5 and advanced to the state tournament for the first time since 2010.

The Rebels, under coach Paul Clancy, enjoyed much improved per-possession statistics across the board and consistently was under the radar. In an extremely talented classification with more than 100 teams, South Gray was never ranked in a Class 1A top-10 poll all winter. In December, SG also won the Cimarron tournament.

As well, SG lowered its turnover rate with miscues on 27.7 percent of possessions to 25, and upped its offensive rebounding rate from 32.7 percent to 35.6 percent.

South Gray had steals on 18.1 percent of possessions last year and 23.2 percent this season. The Rebels ranked in the top-10 among KSHSAA affiliated schools for blocks per game (4.6), and top-15 in steals per contest (12.9), according to MaxPreps’ statewide lists.

Wiebe, after 11.1 points as a sophomore, finished with 12.4 points and four rebounds a game and collected second team all-league. By the Kansas Basketball Coaches Association, Askew was a third team all-state selection, and Wiebe honorable mention.

Wiebe tallied 17 points in 32 minutes in a 41-40 sub-state championship win against Spearville. South Gray had lost 58-49 in overtime to Spearville on Dec. 14.

Jantz is one of the state’s best statistical distributors and was honorable mention all-league. She has six points, 3.7 assists and 3.2 steals a contest. Jantz finished ninth in Kansas in both assists per game and assist/turnover ratio (2.22/1).