v Faces in KS: Luke Wolgamott - Sports in Kansas 
Warning: include(../includes/bodytag.php): failed to open stream: No such file or directory in /home/kansass/public_html/ks/news/index.php on line 36

Luke Wolgamott of Parsons was last years 4A-II Player of the Year from Sports in Kansas. 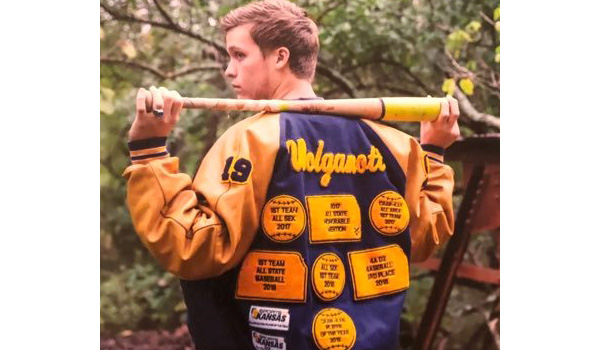 Last high school baseball season Luke Wolgamott helped Parsons High School to a third place finish in the 2018 4A-II State Tournament. Now a senior, Wolgamott will look to be one of the best players in the entire state of Kansas and get his team back to the state tourney.

Wolgamott had an outstanding junior season last spring in which he hit a state leading .636 with nine doubles, five triples, two home runs and 25 RBI on 45 hits for a team that finished at 15-5 over 20 ballgames. For his efforts, he earned the 2018 4A-II Sports in Kansas Baseball Player of the Year. It wasn't just a one-time thing either as he hit .558 as a sophomore in 2017. In addition to his Player of the Year honor in 4A-II, he also earned all-state, all-area and all league honors. He was also the Southeast Kansas Area Player of the Year from Craw-Kan.

Wolgamott has great size at 6-foot-5 and 220-pounds at first base. He could also project as a DH at the next level if needed. He has had intereste from all levels, including division one, but has signed to play collegiately at Neosho County Community College at the next level under head coach Steve Murry. Murry has built a program that is known for taking under the radar Kansas talent and sending it Division I. Just recently he has sent two SEK league players to the Division I ranks in Fort Scott HS products Mason Knopp (Southeastern Lousiana) and Kaleb DeLaTorre (South Alabama). Wolgamott has a 96 MPH exit velocity speed on his batting. He lists his hitting, fielding and knowledge of the game as his strenghts, while says he needs to work on his quickness at the next level.

For now, he is focused on getting the Vikings off to a solid start in 2019. Parsons, led by head coach Gerald Beardmore, has a shot to be one of the better teams in the Southeast Kansas area once again in 2019. They lose just two seniors, however one of those was Noah Chalker, an all-state pitcher who threw over 60 innings in 2018.

Parsons does return a solid cast of players from its third place team from a year ago in addition to Wolgamott, those include Joel Schibi, Zeke Lyons, Nolan Proehl, Jaden Ponce and Connor Eichinger. Boys athletics have been booming in Parsons lately with the fourth place finish in basketball in 2018 with another return trip in 2019, third place baseball in 2019, a 4x100 second place relay squad in 2018 and two playoff wins in football, the first playoff win in 42 years.

Parsons and Wolgamott will look to continue that success this spring in baseball. We caught up with the outstanding senior below in the latest Q&A edition of Faces in Kansas.

I would go to my older brothers baseball games and want to go out and play but I was too young.

Our goals as a team are to get back to the state tournament and make some noise again. My goal is to help in everyway to make that happen.

We have a great opportunity to do great things this year. We lost two seniors last year and we have guys that have played in big games and are experienced.

I believe I'm a force because of my hitting. Its what I work on the most and I've put so much time into it.

The atmosphere here is insane. If you're playing in Parsons there will be fans from 80 years old reminising about when they played to toddlers running around just trying to get a foul ball. its truly something special.

My strengths are hitting, fielding and knowledge of the game. My weakness would be my speed which I've worked on this offseason.

Yes I play in the summer with the Parsons Baberuth All Star Team. we have had a lot of success winning 3 state titles and traveling to Colorado twice, Minnesota, and North Dakota.

Joel Schibi will be a key to are sucess as a pitcher and position player. Jaden Ponce and Zeke Lyons are some of the top outfielders in the state. Nolan Proehl is gonna be a big piece in pitching  and hitting as well. Lastly Connor Eichinger is a force behind the plate and when batting.

The fact that the game is never out of reach, you never know what will happen.

State Baseball is something you have to experience for yourself, for me personally it was the best time of my life.

I played football two years I was the Center on Offense and the Defensive End on Defense. For Basketball I played four years as a Center.

What is it like to compete for coach Beardmore?

It's amazing playing for Gerald he is very intense at practice and games. He takes everyday seriously and there are no off days.

We hit a ton and put in a lot of work in after winter sport practices.

My interest is baseball and I seek to major in mechanical engineering.

Outside of baseball I like to hunt and fish.

Hopefully still playing baseball and if not be a coach at a highschool.

My favorite subject in school is drafting, its what got me interested in engineering.

My role models are my Dad and Gerald, my coach. They both taught be if you work hard for something then you can achieve it.

Ernesto's is a great place to eat in Parsons Kansas.