v Faces in KS: Alec Michaud - Sports in Kansas 
Warning: include(../includes/bodytag.php): failed to open stream: No such file or directory in /home/kansass/public_html/ks/news/index.php on line 36 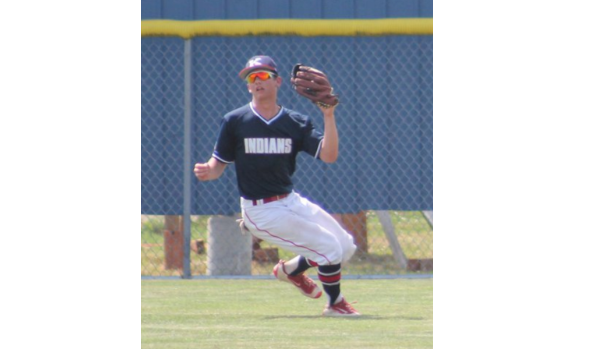 Michaud, who is tabbed by his head baseball coach Josh Regan as the best defensive outfielder he has every coached, is also pretty good with his bat as he hit .429 last season as a junior on the way to Sports in Kansas all-state honors as a center fielder. He also hit .387 as a sophomore. Michaud also had 16 stolen bases last year in 20 games last year and has a 6.78 timed 60.

"He has perfect routes to the baseball, instant jump. His range enables him to not only catch fly balls in the gaps but also get to the baseball faster and take 90 feet at a time from opposing base runners." Regan said.

Fort Scott has become quite the baseball town as of recent. Of course its claim to fame is former MLB star Adam LaRoche who spent multiple years in professional baseball. LaRoche also donated the the new LaRoche Baseball Complex (Dave Regan Field) which has been a complete game changer for the community for bringing in baseball events. Fort Scott also has two players currently playing Division I baseball in Kaleb DeLaTorre (2016 alum) at South Alabama and Mason Knopp (2015 alum) at Southeastern Louisiana. Chase Brown (2015 alum) also had a breakout season at Division II national runner-up Columbus State last season. All are off to good starts in 2019. There are also other Tigers in the juco and Division II ranks.

The Tigers have a chance to be pretty legit this year as well with the return of Michaud, all-state multiple sport athlete Matt Campbell, a 6-foot-5, 230-pound, first baseman, that hit over .500 last season. They also return Ty Gorman, who is the fastest player on the team and a legit second baseman. All three are also going to play at Fort Scott Community College next season. They also feature Ivan Witt, a sophomore that has committed to Division I Wichita State, that should be one of the best sophomore catchers in the state.

Michaud isn't just a baseball player either. Despite being just 5-foot-11, 165-pounds, he was one of the best football players in Southeast Kansas for 2018. He earned first team all-state honors at linebacker and also had a standout season with over 600 yards rushing. All done in 6.5 games because of injury.

Michaud is also an oustanding student athlete with a perfect 4.00 GPA. For now his focus is on getting the Tigers off to a successful start in 2019 and perhaps have them in a spot to get to the 4A state tournament in 2019. We caught up with him below in the lastest Q&A edition of Faces in Kansas.

This feature is presented by Empress Event Center. Proud to support Alec Michaud and the Fort Scott Tigers.

I loved sports growing up.  When I reached the age to start playing t-ball my parents got me onto my first team.  That is how my baseball career began.

Of course, my main goal this season is to win a state championship.  It should be every player/team’s goal to achieve this.  My other personal goals this season include ending with at least a .350 batting average, and have 20 stolen bases.

We have a shot to do very big things this year.  We have a large and talented senior class as well as a strong group of juniors and sophomores to complete our lineup.  As far as team chemistry goes, I believe there is no team that is more connected than ours.  Each and every member of our team contributes to our success and we are all like family.  We endure so much together and it has formed a bond that can never be broken.

My strongest asset as a player is my mind.  I may not be able to overpower someone or out run everyone, but I am proud of my ability to think two steps ahead to help gain advantages.  Out smarting an opponent is just as valuable as physically overpowering them and I believe that  is why I am a successful player.

With not a lot of things to do in our small town, the community really comes together to support our athletic programs.  Playing in front of our fans is one of the most exciting things that I have ever had the pleasure of experiencing.  Football and basketball games are loud and rowdy and a lot of fun.  Baseball games always have high turn outs and there is no other town I would rather play for.

My strengths as a competitor include leading by example, my in-game intelligence, and being a hard worker.   My weakness is short term memory.  I always tend to think about what I did wrong and try to learn from it, so I don’t make the same mistake again.  However, it can be beneficial to just forget about it and move to the next play.  This is a weakness I intend to work on this year.

Yes, I play for the Kansas Indians 18U team out of Fort Scott.  Summer baseball is a great way to stay in the game while being with your friends.  Some of my greatest memories come from playing summer baseball.

There are several players worth mentioning on this year’s team.  However, I will just mention a couple of the seniors worth looking at.  Our first baseman Matt Campbell has an amazing glove and can really swing the bat.  He was first team All-State last year at first base and hit around .500 on the year.  He has a ton of natural power at 6’-5” 230lbs and makes solid contact consistently.  Another player is Tyler Gorman who plays second base.  Tyler is one of the hardest working kids I know and is a super instinctive ball player.  Tyler is the fastest player on the team and has a knack for running the bases.  He consistently makes plays in the field that only a true baseball player could make, and his bat is one of the best on the team.

My favorite thing about baseball is that it doesn’t matter what size you are.  Baseball rewards players that have good coordination, game senses, and athleticism.  I have never been the biggest player on the team; however, I have been able to compete at the highest level because I am able to be in the right place at the right time.  Also, perfection is impossible.  In other sports you are expected to make every play every time.  In baseball, if you get one hit out of every three then you are considered a tremendous hitter.  This takes a lot of pressure off of my shoulders and allows me to excel without fear of making mistakes.

I have never been to the state tournament.  However, it is our team’s goal to make it there this year and we will not accept anything less.

It has been a true honor to compete for Coach Regan.  Coach Regan requires your absolute best and expects nothing less.  Everyday he pushes us to become better players and better young men.  I can see myself coaching in the future and I imagine I will my program the same way Coach Regan runs ours.

We have open cages every week so our team can go get swings during the offseason.  Also, most of our players are in a strength and conditioning program to work on strength and mobility.

I am just recently committed to Fort Scott Community College baseball.  After my two years there I plan on transferring to a four-year school to pursue a degree in architecture or engineering.  Unless my interests change.  I am still trying to decide what I want to major in.  These two areas are just things I think may interest me.

Golfing is probably my favorite thing to do other than playing sports.  Even though golf is a sport, I play more because it is fun and relaxing.

In ten years, I see myself living in a starter home with my wife and maybe a child.  Maybe in the suburb of a big city or just in a large town.  I hope to have a successful job that will allow me to be able to support my family and I hope to coach my children’s sports teams.

History has always been my favorite subject in school.  I enjoyed learning about the past and how things have changed since then.  I have always had good time management skills and the ability to learn under pressure.  I expect the best out of myself and that is the way I approach school.  I have a 4.0 GPA

Jordy Nelson, because he is a small-town Kansas kid who never received much attention coming out of high school.  Yet he worked his way into a walk-on spot and Kansas State University and became one of the greatest players to ever play there.  He then went on to have a tremendous NFL career.  Yet he is still an amazing Christian man and father.

I would say the Nu-Grille is the best place to eat in Fort Scott.  It’s a homestyle diner and it is the place to go in town for delicious comfort food.

Something the average person doesn’t know about me is that I love to play cards.  Card games challenge your brain and involve strategy and wittiness that is very fun for me.