v Faces in KS: Trey Patterson - Sports in Kansas 
Warning: include(../includes/bodytag.php): failed to open stream: No such file or directory in /home/kansass/public_html/ks/news/index.php on line 36

Trey Patterson is looking for a big 2019 track and field season for Cheney. (photo: James Schultz) 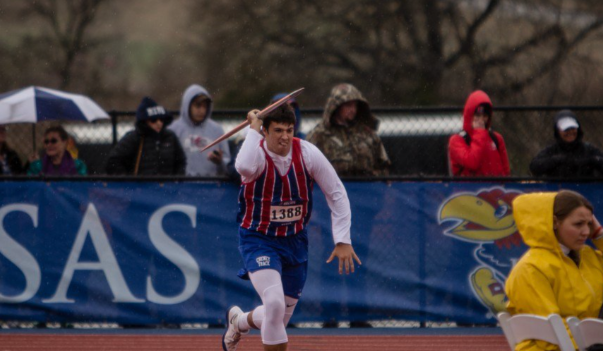 Cheney senior Trey Patterson, who recently signed with Nebraska for track and field at the Division I level, is looking to be one of the best javelin throwers in the US this spring.

He has a PR of 202-5 feet last year in the 3A regionals which ranked third in all classes of Kansas in any grade. It also ranked 20th nationally. He has goals to be in the 220 range in 2019. He also wants to consitently be over the 200-foot range in the javelin, which will almost always rank near the tops in Kansas and towards a national mark.

Last season he took second in the 3A state track and field meet in Wichita with a throw of just over 183 foot, however it was about 19 feet off his PR.

Three springs ago as a freshman Patterson almost didn't do track but his brother encouraged him to try it instead of high school golf. It's a good thing as he is now one of the nations best and recruited by schools all across the country.

Patterson is primed for a big senior year for the Cheney Cardinals and we caught up with him below in the latest Q&A edition of Faces in Kansas.

How did you get involved in track and field?

My personal goals for this season are to be a consistent 200ft javelin thrower with hopes to hit a PR over 220ft. I would also like to be in the 150-160ft range in the disc. I hope to place at state in multiple events this year.

Our team was very young last year. Going into this year, we definitely have a shot at chasing a state title if everyone can stay healthy.

My competitive edge and size separates me as an athlete. Size is very beneficial when throwing; it always helps to have long levers.

There is nothing like playing sports in the small town of Cheney. The support that this community gives to our school is unmatchable. As athletes, we can also count on having a great crowd at home games and away events. Many times Cheney brings a larger crowd than the home team.

We will not disappoint. Track and Field at Cheney has a long standing tradition of success that has been ingrained in all of the athletes on the team. We know that when we put on our red and blue striped jerseys, we are also representing everything that this program has represented in the past.

My competitive edge with my athleticism is what drives me to be the best that I can be. I am never satisfied even after my best performances. I feel like I always have more work to do and that there is room for improvement. My biggest weakness is by far my lack of experience. Often times at big meets, I am competing against athletes who have been throwing since a young age.

How does track and field help you in all sports, if you play multiple sports?

The training I did for track this summer has improved my flexibility and strength which made me less prone for injury during this past basketball season.

We have a very good and all-round team this year. Jason Huebner in the sprints, Riley Petz in the hurdles, Marcus Peintner and J Riedl in the jumps are just a few of our returning state competitors.

Favorite thing about track and field?

My favorite thing about track is definitely seeing the javelin fly. There is nothing that can explain the feeling of being able to throw a spear far.

How cool is the state track and field experience in Wichita?

No one can express the feeling of competing at Cessna Stadium. Being surrounded by the best athletes from all classifications is a great experience for everyone. It is a feeling that you will never forget.

I played football for three years and received league recognition as a tight end. I have also competed as a varsity basketball player for the past four years.

Coach Randy Weber, my javelin coach, challenges me to be the best athlete that I can be. He currently has a 23-year streak of putting a thrower on the podium during the state meet.

This summer I participated in the USATF Junior Outdoor Championship in Bloomington, Indiana. I then traveled to Greensboro, North Carolina to throw in the USATF Hershey National Junior Olympic Championship. This fall, I attended a Project Gold javelin camp in Phoenix, Arizona where some of the best javelin throwers in the world were in attendance. I also had the opportunity to train and learn from multiple Olympians this summer including Brittany Borman, Todd Reich, Raymond Hecht, and the reigning Olympic champion Thomas Rohler.

My plan is to compete at the Division I level at Nebraska and pursue a degree in Construction Management.

When I am not playing sports, there is a very good chance that I am working with my dad building houses or working in the wood shop. Also, with Cheney Lake being 4 miles from my house, I spend a lot of time out there fishing too.

I see myself working in commercial construction as a job superintendent. If college goes well, possibly pursing my dreams of training for the Olympic trials.

I would have to say my favorite subject in school is Industrial Arts. When it comes to being a student I would say that I am a very hands-on type of student. I would rather solve a problem with my hands than use an equation.

Throughout my short Javelin career, my role model has been my brother, Ty. My brother started throwing the javelin in high school and is now competing at the collegiate level for Wichita State University. He has put in countless hours helping me with training and technique for the javelin. He definitely drives me to be the best that I can be day in and day out.

You can’t go wrong with some cheese sticks from D’Marios.

Athletics has always been a very important part of my family, and I come from a very long line of family members playing at the collegiate and even professional level. My uncle Harold Patterson, was a three sport letterman for KU and was inducted into the Kansas Sports Hall of Fame after his professional football career.  Currently, my cousin Gary Patterson is the head football coach for the TCU Horned Frogs.

If it wasn’t for my brother telling me to give track a try after my freshman year, I would still be playing golf during the spring.