v Emily Ryan named Sports in Kansas Player of the Year - Sports in Kansas 
Warning: include(../includes/bodytag.php): failed to open stream: No such file or directory in /home/kansass/public_html/ks/news/index.php on line 36

Emily Ryan named Sports in Kansas Player of the Year 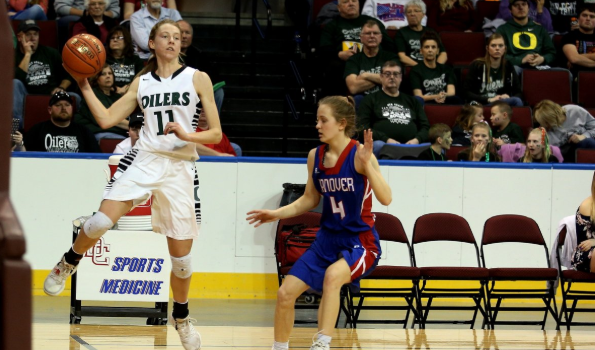 2019 1A Sports in Kansas Girls Player of the Year

Ryan repeated as Class 1A (2A last year) Player of the Year and All-Classes Player of the Year. The 5-10 Ryan is the third player in Kansas history to clear 2,000 career points before her senior season. This winter, she led Central Plains to more unprecedented marks. CP captured its sixth straight state title and fourth consecutive undefeated year, both state records. Central Plains has won 111 straight games and broke Hoxie’s state record of 107 in a row in the sub-state title game. Ryan, the team’s point guard, averaged 30.6 points, 6.1 assists and 5.6 steals a contest as Central Plains set state records for fewest points allowed per game (plus-24.5) and average margin of victory (plus-49.2).

At state, Central Plains defeated South Gray, 63-28, then beat Thunder Ridge, 78-36. In the finals, CP held off Hanover, the two-time defending Class 1A, Division I state champions, 50-34. The Oilers received 29 points from Ryan in the state finale and completed a 28-0 season that included a KSHSAA postseason bye. Central Plains will be heavily favored again next year with four starters back and freshman Kassidy Nixon, a talented reserve, likely expected to move into the starting lineup.

Ryan holds offers from nine of the 10 Big 12 programs and several others across the country and could rise to a five star recruit by the time its all said and done.

Special Thanks To Everett Royer of KS Sports Images, who captures the best of Kansas high school sports through his lense at all kinds of sporting events, for the photo of Ryan. You can find his work online at https://www.ksportsimages.com/

Sports in Kansas 1A Player of the Year Finalists