v Kylee Scheer of Cheney named Sports in Kansas 3A POY - Sports in Kansas 
Warning: include(../includes/bodytag.php): failed to open stream: No such file or directory in /home/kansass/public_html/ks/news/index.php on line 36

Kylee Scheer of Cheney named Sports in Kansas 3A POY 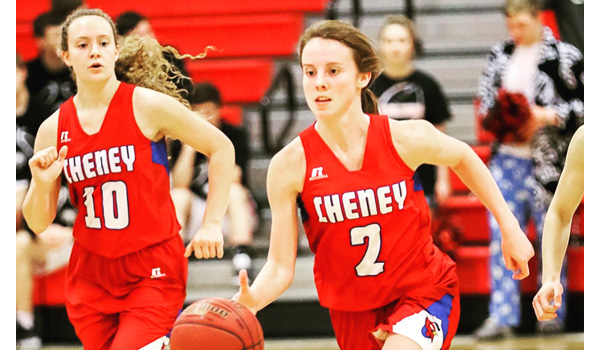 2019 3A Sports in Kansas Girls Player of the Year

In a very close 3A Player of the Year race, perhaps the absoulte closest we've ever had in seven years, that came to down Scheer, Royal Valley’s Mary Broxterman (Sports in Kansas 3A Tournament MOP), Hesston's Elise Kaiser, Jefferson West Aaliyah Negonstott and Haven’s Faith Paramore, Scheer narrowly earned the honor. She led Cheney to a 23-3 record and runner-up showing in 3A to Royal Valley. Scheer averaged 18.1 points, 4.1 rebounds, 3.6 steals, 2 assists per contest.

The 5-8 sophomore was an efficient shooter with 43 percent shooting, 33 percent from long range and 71 percent from the foul line. Scheer scored 38 points and broke a 31-year-old 3A state record, in the state-opening 65-43 win versus Columbus. Her 62 three pointers this year are also a three point record at the school. Her 17 field goals in a state tournament game are a 3A record and tied all classes. Her 11 three pointers made in the state tournament are also a 3A state record.

In the loss against Haven, Scheer had 16 points on 3-18 shooting, with three rebounds. In the Haven victory, Scheer provided a key lift with 24 points on 7 of 12 from the field. She is the third Scheer sibling to play in a state basketball tournament for Cheney.

The Cheney Alumni Association would like to congratulate Kylee Scheer on the Sports in Kansas 3A Player of the Year. Congrats to the Cardinals and all their success this season!

Congrats Kylee and the Cheney Cardinals! 2019 Sports in Kansas 3A Player of the Year and the 3A state runner-up! - From your Family!