v Alayna Townsell of Aquinas named Sports in Kansas 5A POY - Sports in Kansas 
Warning: include(../includes/bodytag.php): failed to open stream: No such file or directory in /home/kansass/public_html/ks/news/index.php on line 36

Alayna Townsell of Aquinas named Sports in Kansas 5A POY 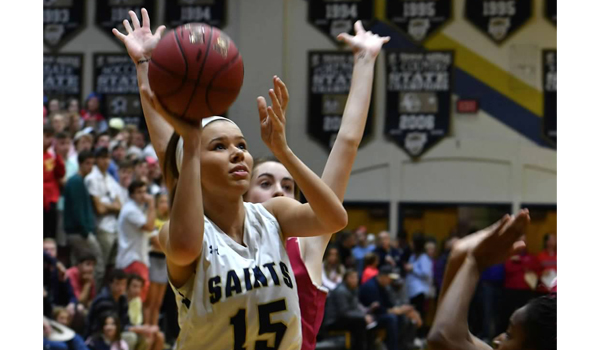 2019 5A Sports in Kansas Girls Player of the Year

Townsell helped Aquinas to its fourth straight 5A state title and earned Most Outstanding Player honors at the state tournament. Townsell has signed with Division I Hampton (Va.) University. Her strong play in multiple areas helped Aquinas win the title. In the first round, Aquinas had to play undefeated Maize South, ranked No. 1 in 5A. Maize South hadn’t lost on the court, but had to take six losses because of the transfer issue regarding Zayda Perez. Townsell, a 6-foot shooting guard/forward, didn’t score but had eight rebounds and three assists and helped squelch the Mavericks’ offense in a 47-29 victory. Townsell averaged 15 points per game and shot over 90 percent from the foul line.

In the semifinals, Aquinas defeated McPherson, 44-36, in a matchup of the 2018 5A and 4A-I state titlists. Townsell delivered 19 points and nine rebounds in the victory and led her team in scoring. In the final, she again paced the Saints in scoring with 15 points as Aquinas beat Blue Valley Southwest, 59-38, and finished 20-4. Townsell cleared 1,000 career points in February this season.

Townsell was a key part of the Aquinas’ senior class that also featured Madison Skelton and Blythe Pearson. Townsell was ranked as the No. 32 player in her class by ESPN and received an 88 grade by ESPN Scouting. Coach Rick Hetzel has now captured eight state titles, all in the last 20 years, and Aquinas has reached the state tournament 25 straight seasons. Hetzel is second to Bishop Miege’s Terry English for most state titles by a girls’ coach in Kansas annals. Assistant coach Bob Harbour has also been a key member of the staff and has coached 22 years with the Saints.

Saint Thomas Aquinas High School and Athletic Department would like to congratulate the 2019 5A State Champion Saints and head coach Rick Hetzel on an outstanding 2018-2019 season. STA would also like to congratulate Alayna Townsell on the 5A POY. Find us online at www.stasaints.net