v Liebl, Ryan of Central Plains take home 1A POY - Sports in Kansas 
Warning: include(../includes/bodytag.php): failed to open stream: No such file or directory in /home/kansass/public_html/ks/news/index.php on line 36 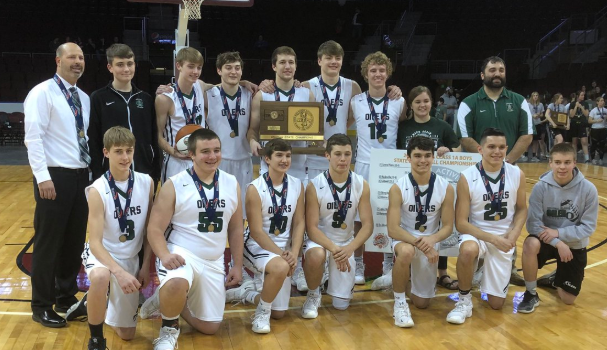 2019 1A Sports in Kansas Boys Co-Player of the Year

Central Plains boys went 26-0 and captured the Class  2A state title last season, then posted a 13-0 mark and won the Eight-Man, Division I  crown in the fall, and then earned 1A basketball this year.

Including a KSHSAA postseason bye, the Oilers went 28-0. Central Plains has won 53 straight basketball games, including a 40-28 victory versus rival St. John in the 1A state title. It marked the fourth time the Oilers had defeated SJ this season.

The links to the success have mainly come with four current seniors: Devin Ryan, Brett Liebl, Alex Hickel (Most Outstanding Player at the 1A Tournament from Sports in Kansas) and Myles Menges, all four highly acclaimed athletes. Ryan, the point guard, led the offense and consistently displayed excellent passing, 3-point shooting and lockdown defense. Coach Brett Rolfs long labeled Ryan another coach on the floor.

Known for his work ethic and unselfish attitude, Ryan delivered 11 points, 13 assists and four rebounds against just one turnover in the 55-30 state quarterfinals win versus Macksville. Liebl had 20 points on 10 of 10 shooting and eight rebounds in the contest.

In the semifinals, Liebl had 25 points on 11 of 12 from the field, and eight rebounds. Ryan delivered four points, eight assists and one turnover in a 59-41 victory versus Caldwell. In the championship, Ryan had nine points and three assists, while Liebl finished with six points and six rebounds. In a grinding game with fewer than 40 possessions, Ryan/Liebl helped Central Plains average an efficient 1.08 points per possession and just six turnovers.

Overall, the 6-2 Liebl averaged 17.2 points, 7.4 rebounds, 1.5 steals and 1.5 assists per contest with 68 percent shooting and 66 from the foul line. Liebl was also the Sports in Kansas 8M-I Defensive Player of the Year.

Congrats to the Oilers on all of their success! From Todd, Carla, Corey, Adam, Gina and Evan Liebl.

Central Plains High School would like to congratulate all of the Oilers on their success this school year. Congrats to the back-to-back boys state champs and six in a row girls state champion!