v Pfannenstiel takes home Sports in Kansas 2A POY honors - Sports in Kansas 
Warning: include(../includes/bodytag.php): failed to open stream: No such file or directory in /home/kansass/public_html/ks/news/index.php on line 36 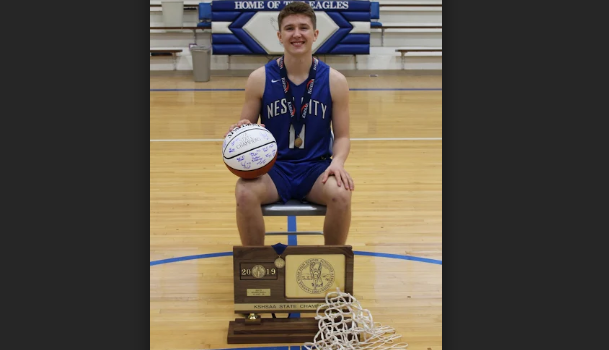 2019 2A Sports in Kansas Boys Player of the Year

The 6-1 Pfannenstiel led Ness City to its first boys’ basketball state championship in school history. NC, the No. 4 seed, went 22-4. The Eagles beat Bishop Seabury, 63-61 in overtime, in the state quarterfinals on two buzzer-beaters, the latter by Pfannenstiel to win the game.

In the semifinals, Ness City held off Inman, 71-66, and then beat Trinity Catholic, 67-55, in the championship. Of NC’s six postseason wins, five came by single figures. Pfannenstiel, an excellent leader with a perpetually positive personality, averaged 21.7 points, 4.7 assists, 5.6 rebounds and 2.3 steals per game.

Pfannenstiel had an excellent supporting cast, including seniors Andres Rios, Angel Guzman, Landon Reinhardt and Clayton Beutler, along with junior Easton Seib, who all stepped up at various times when defenses focused on him. Pfannenstiel was a two-time first team unanimous all-league selection. Pfannenstiel has received an offer from NAIA Bethel College, though has expressed a desire to play Division II basketball, especially at nearby Fort Hays.

Congratulations, John. 2A Player of the Year!! From Coach Rogers, Haily, and Cal

John, Congratulations on this highly regarded award of 2A Player of the Year from Sports in Kansas! We are so proud of your har work and perseverance! Love, Dad, Mom, and Summer.