v 2019 Sports in Kansas Boys All-Tournament Team - Sports in Kansas 
Warning: include(../includes/bodytag.php): failed to open stream: No such file or directory in /home/kansass/public_html/ks/news/index.php on line 36 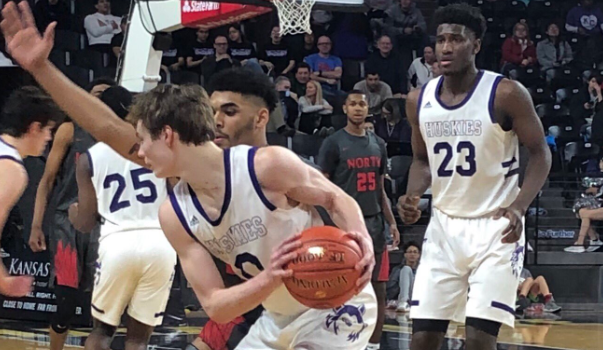 In addition to our all-state honors, which will be released next week (3/17/19) along with stat leaders from the season. We have released our 2019 Boys All-Tournament Team (Girls also will be up on our website main page later this evening). To be eligible for the five member list per class (six in some classes due to tie), you had to play in at least two games at the 2019 state tournament this season.

Braun scored 74 points over three tournament games to give the Huskies their third consecutive state title. The KU signee averaged closed to 30 points and 11 rebounds as a senior in 2018-2019.

The sophomore scored 87 points over three tournament games to lead all scorers among the 6A state tournament enroute to a third place finish in 2018-2019.

Leedom was the different in the semifinal win over Maize with 34 points and distributed the basketball well all weekend. In the opener he had 17 points and 8 assists against Pittsburg. He had 34 points, five assists, seven boards and three steals in the semifinal win over Maize. He then had 19 points, two assists, four bebounds and two steals in the final over Andover Central. While this award could’ve went to his teammates (all three over 1,000 career points) just as easily in Brandon Belt (48 tourney points) and Xavier Bell (69 tourney points), Leedom was one of the most complete players in the state tournament in all classes this season.

Leedom had 70 points over three tournament games, edging out teammates Xavier Bell who had 69 and Maize senior Caleb Grill who had 68

Bates shined as a senior point guard in Salina this weekend and his younger sophomore brother Tamar could have easily been selected to this honor as the two scored in double figures all three contests on the way to leading Piper to their first ever state basketball championship. They combined for 27 in the opening round win over Parsons, 31 in the semifinal win over Trinity and 41 in the championship game over Augusta. Tyrone had 16 assists over three tournament games for the Pirates.

Jackson had 58 points over three tournament games as the Irish took fourth place in 4A this season. He had 28 in the opening round win over Anderson County.

Muia may have been slowed down in the title game and had some foul trouble but his overall tournament resume, he was easily the best player in Hutchinson. He scored 65 points over three tournament games to average 21.7 on the year. He averaged 24 points and 11 rebounds per game in 2018-2019 for the 3A state champion Trojans, winning their first ever state title in school history. Muia had a 33 point semifinal game against TMP to put Girard in the title game. He also averaged 7.7 rebounds per game at the state tournament. It was a total team effort for the Trojans who saw big games from Ryder Worrell, Evan Troike and Carter Doherty in the title game. Troike led all rebounders at the tournament with 9.7 per game and stands just 5-foot-10. He also led the tournament in assists with 5.7 per game and second in steals with 2.3 per contest.

Muia scored 65 points in the state tournament, including 33 in the semifinal win over TMP.

Rios scored 20 in the title game to give Ness City their first ever state title. He also had 24 points and eight rebounds in the opener against Seabury Academy in overtime. He scored 52 points over three tournament games. While this award could’ve went to Pfannenstiel or the outstanding tournament Mason Thiessen had of Inman, both of who will be in the 2A POY discussion this week at Sports in Kansas, Rios was the difference maker on Saturday to get his team a state title.

Mason Thiessen scored 66 points in the 2019 state tournament including 26 in the third place game on Saturday over Colgan. Thiessen was one of the top players all season long in 2A basketball and had a great state tournament.

Any of the three above CP players could’ve gotten this nod but it was Hickel’s 21 points in the title game that paced the Oilers to their 53rd consecutive win and second state title undefeated, this year in 1A after winning 2A last season. He scored 21 of the teams 40. Hickel was in double figures in all three games, the only CP player to reach that feat at this years state tourney. While Devin Ryan and Brett Liebl will contend for Player of the Year honors this next week, Hickel gets the MOP of the 2019 state tournament for his outstanding performances over three games.

Risley scored 56 points over three tournament games, in very low scoring team outings. He had 26 in the third place game although his team fell short and finished fourth in 2018-2019.