v Six State Champions Crowned in Girls Basketball for 2019 - Sports in Kansas 
Warning: include(../includes/bodytag.php): failed to open stream: No such file or directory in /home/kansass/public_html/ks/news/index.php on line 36

Royal Valley with its first ever state championship. (courtesy photo) 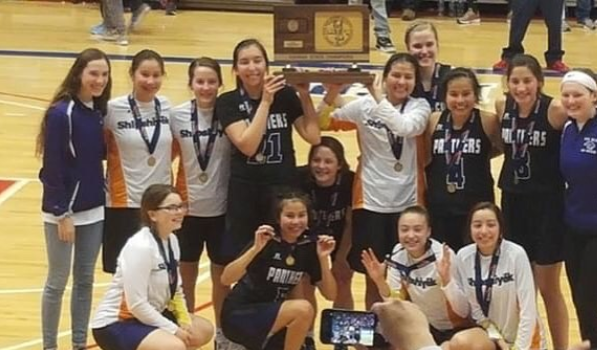 Washburn Rural wins the all Topeka final 54-42 over Topeka High. Three WR players in double figures (Carly Bachelor, Emma Krueger, Kasey Hamilton). The Creighton signee Bachelor had a game high 22 points and six boards. Sixth girls state basketball title in school history and first since 2009. What a season for WaRu as they may have done the unthinkable in the semifinal 45-40 win over previously unbeaten and defending champion Derby, who featured McDonald’s All-American Kennedy Brown and Missouri State signee Tor’e Alford.

St. Thomas Aquinas with 59-38 win over BV Southwest to win their fourth title in a row and eighth in program history. Saints went 20-4 in 2018-2019. It was a total team effort for STA who saw all of their starters score at least eight points. Alayna Townsell led the Saints with 15, while Blythe Pearson had 13 and Madison Skelton had 10. Skelton also had six rebounds and four assists in the game. Amiah Simmons had 11 points for BVSW.

Bishop Miege with a 60-41 win over Piper in the 4A title game in Salina. Faith Hawthorne, a sophomore, had 22 points and 11 rebounds. Ashton Verhulst, a junior, with 11 points, 7 boards. Payton Verhulst, a sophomore, with 7 pts, 10 boards. 21 state titles for Miege in girls basketball under the legendary coach Terry English. This team has been ranked nationally and don’t expect that to change as the majority of the talent is all back.

Mary Broxterman had 25 points and 14 rebounds while Mahpiya Irving had 12 points. Royal Valley with their first ever state basketball title after taking runner-up last season. Royal Valley only has one other state title in school history, that coming in boy’s cross country. Broxterman finished as the second leading scorer in the tournament with 76 points (25.3 ppg) behind Kylee Scheer of Cheney who had 78 (26 ppg). Mahpiya Irving of RV also averaged 9.7 ppg over the tournament.

Garden Plain wins their second consecutive state title (last year’s 3A champ). Lauren Danahy with 15 points and 5 boards. Abby Gordon with 10 points. Fifth state title for Owls (1978,1995, 2001, 2018, 2019). Garden Plain had a tough path to the bracket as they had to knock off Wabaunsee (55-51) in the semifinal to get to the title game. It was a team effort for the Owls as eight different players scored in the game on Saturday. GP entered the tournament as the fourth seed.