v Six State Champions Crowned in Boys Basketball for 2019 - Sports in Kansas 
Warning: include(../includes/bodytag.php): failed to open stream: No such file or directory in /home/kansass/public_html/ks/news/index.php on line 36 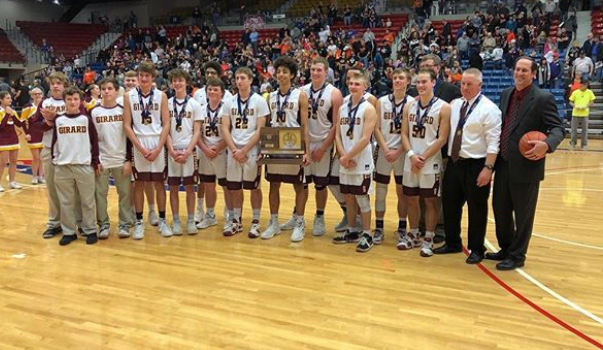 We take a look at the six state championships played on Saturday 3/9/19 in Kansas.

Michael Pierce led the team in scoring with 17 for BVNW as KU signee Chrstian Braun scored 16 points and grabbed 10 boards for the Huskies as they won their third straight state championship under Ed Fritz. Just five players scored in the game for BVNW. It may have been a bad shooting night from three for the Huskies (1-10) but they had 30 points in the paint and 10 off second chances and a 20 point fourth quarter to pick up the win. Arhmahn Downing led the Junior Blues of Washburn Rural in scoring with 17 points.

The three headed monster (Xavier Bell, Brandon Belt, Easton Leedom) as we’ve tabbed them all season were huge all state tournament in leading the Jaguars to their first ever state championship in boys basketball. After knocking off previously undefeated and number one ranked Maize 74-66 in the semifinal, Central would get a 58-47 win in Emporia on Saturday over Basehor Linwood. The path to the tournament for AC was possibly the hardest with Pittsburg, Maize and Basehor Linwood all in their way. It didn’t phase them as their offensive explosion had 152 points in the first two rounds over two very good defensive teams. Senior Brandon Belt led all scorers in the title game with 20 points and also picked up five boards. Senior Easton Leedom had 19 points, 10 of those coming from the foul line. Junior Xavier Bell had 16 points and 10 boards in the game, including 7 of 8 from the foul line. AC got to the foul line 33 times in the game, making 23 of those. An even more rare feat than the state title was three AC players over 1,000 career points in Bell, Belt and Leedom. It is the first time we’ve seen that (three on the same team) since starting Sports in Kansas in 2012.

It was all Piper in the state title game as they got a 33-point win over Augusta in the title game. The state championship game for Piper may have been in the first round against Parsons where they had a late come from behind win. It marked the first ever state championship in boy’s basketball for the Pirates on Saturday in Salina. Tyrone and Tamar Bates combined for 41 points as Tyrone had 20 and Tamar with 20. Tyrone also had eight assists and three steals in the game. It was a total team effort in the win as five players, all five starters, were in double-figure scoring for Piper as Tyren Shelley, Braijon Barnes, and Brandan Jackson scored in double digits. Piper was hot from the floor as they made 34 of 56 shots and seven of 16 from the three point line. They also made 11 of 15 free throws in the final and picked up 11 steals as a defensive unit, causing 13 total turnovers for Augusta.

Girard trailed much of the second, third and fourth quarter but an impressive defensive outing for the Trojans got them their first ever state title in boys basketball on Saturday in Hutchinson as they outscored Beloit 13-4 in the final quarter. The Trojans of Girard out-rebounded the Trojans of Beloit 32-19 in the final as Girard took advantage off scoring 13 second chance points. Girard got all but two of its points from its starters. Star player Caleb Muia, who was in foul trouble with four fouls the majority of the second half, led Girard with 15 points and eight boards despite being slowed down by double and triple teams. He had 65 points in three tournament games, including 33 in the semifinal. Ryder Worrell seemed to be the difference maker with clutch shots as he had 12 points off of 4-of-8 shooting from the three-point line. Evan Troike was the glue guy of the team all year and had aggressive defense all night and with his 5-foot-10 frame, he pulled down 9 rebounds, four of those on the offensive end. He also had seven points and five assists. Carter Doherty, a 6-foot-5 senior, also pulled down seven points and seven boards for Girard. Dylan Collins also added six points for the Trojans. It was truly a team effort in the title game for the 2019 3A State Champion under head coach Rod Wescott. Wescott also took 4A runner-up in 2009 with Girard. Girard made some second half adjustments to control Carson Cox of Beloit. Cox had 20 points in the first half on 6-of-6 shooting from 3P, but he would score zero in the second half. Girard finished the season with a 22-3 record.

The Eagles got their first ever state title on Saturday in Hays. All but three points were scored from their five starters. Andres Rios was the star of the title game as he had 20 points for Ness City on 8-of-11 shooting from the floor. Easton Seib, Angel Guzman and Landon Reinhardt all stepped up big for double-figure scoring while star senior John Pfannenstiel was limited to just seven points as he only took four shots. The total team effort for Ness City was 25 of 39 from the field, including six of 11 from the three-point line. Ness City 18-12 fourth quarter was the difference in the ball game after a slow 13 point third quarter. Lucas Hammeke had 17 points for Hutch Trinity.

Alex Hickel scored 21 of his teams 40 points in the low scoring outing against CPL rival St. John on Saturday in Dodge City as the Oilers won their 53rd consecutive game on the way to back-to-back state titles, last years coming in 2A. CP also saw their girls win their 111th straight game on the way to their sixth straight state title. Only four CP players scored but that was all that was needed in a solid defensive effort with 24 defensive stops and 19 second chance points for the Oilers. The Oilers never allowed double digit scoring in the title game in any quarter. Devin Ryan also had nine points in the game and Brett Liebl had six.