v Around the State Update: Sub-State Basketball Notes - Sports in Kansas 
Warning: include(../includes/bodytag.php): failed to open stream: No such file or directory in /home/kansass/public_html/ks/news/index.php on line 36

Caleb Grill and Maize have had an outstanding season. 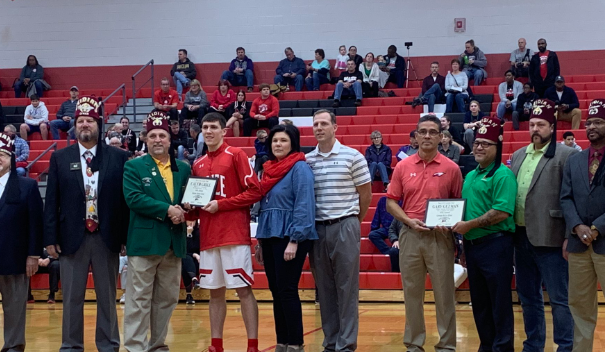 Many of the 1A regional games concluded Sunday after the contests were shifted a day because of the weather. For the first time since 2010, Class 1A is back to one class after it was split into Division I and Division II.

Central Plains defeated Otis-Bison, 62-32, in a game that had the No. 1 ranked team and No. 8 ranked squad in 1A. The Oiler girls have now won 106 straight contests, one victory away from tying the all-time consecutive wins streak of 107 set by Hoxie.

In an oddity, Central Plains girls were placed in the Russell sub-state, while the undefeated CP boys are in the WaKeeney-Trego sub-state. CP boys defeated Sylvan-Lucas. 59-17, and have back-to-back perfect seasons. The Oilers were both granted a postseason bye that goes as a win in KSHSAA results, but does not count for the winning streak.

Central Plains girls (23-0 with the bye) are the heavy favorite and gets Osborne (11-10), Quinter (10-12) and Atwood-Rawlins County (16-7). Quinter girls are the defending 1A, Division II champions and then had significant graduation losses.

The Bulldogs defeated Weskan and Dighton, ranked first and second in the Grainfield regional. After losing three straight, Quinter has won four in a row. Seniors Evie Gruenbacher and Andrea Charles, who have each averaged around 10 points a game, have had breakout years.

Rawlins County, which defeated Quinter 54-21 in a Feb. 8 road contest, has a five-win improvement over last season with coach Brad Pfortmiller. The Buffs have their best season since a 16-7 mark in 2011-12.

Also in the Russell sub-state on the boys’ side, Osborne is 21-0 and could face Almena-Northern Valley, 21-2, the defending Class 1A, Division II state champion.

The Oiler boys, which went 26-0 last season, have been ranked No. 1 all year. CP is with Stockton (8-14), Wallace County (20-2) and St. Francis (16-7). Wallace County is ranked sixth in the classification and has one of the state’s all-time great coaches in Larry O’Connor, who has won four state titles, two each with Brewster and WC. Trevor Medina cleared 1,000 career points this season.

In the WaKeeney-Trego girls’ sub-state, Otis-Bison (20-3) faces Thunder Ridge (19-2). Golden Plains (23-0) gets Dighton (13-10). O-B, which defeated TR in the sub-state volleyball championship, has its great inside threats with Maddie Wiltse and Cora Anderson.  Thunder Ridge counters inside with post Libby Hardacre.

Class 2A: Plainville girls have improved defense, best record in many years

On Monday, The Cardinal girls defeated Smith Center, 53-50, in the first round of the Class 2A Leoti sub-state. The home team, Plainville led 17-8 after the first quarter and by 15 late in the first half before hanging on. The Cardinals had lost to Smith Center, 71-49, in the season opener and then again, 52-46, on Jan. 15. Plainville had been 2-19 in its last 21 contests versus the Lady Red and ended a five-game losing streak in the series.

Plainville received another huge game from junior Aubree Dewey, who had 28 points on 9 of 18 shooting and 8 of 9 from the foul line. However, the Cardinals continued their much improved defense from last season. Plainville held SC to 1 of 11 shooting from beyond the arc, was plus-9 on the glass and committed four fewer turnovers.

Plainville has upped its steal rate to 17.1 percent from 15.3 percent last season. In addition to Dewey, Kate McClellan enjoyed a big game with 14 points, six rebounds and three steals, and Jersey Kaiser had five points, five rebounds and a steal.

Last year, Kaiser averaged two points and 0.6 steals a contest, while McClellan was 6.5 points and 1.3 steals. This year, they have combined for 10.6 points and 3.3 steals a game.

Plainville is 12-9, its most wins since a 12-10 mark in 2010-11. The Cardinals – who are one of just two teams to defeat Thunder Ridge this year – are a darkhorse in a sub-state that includes WaKeeney-Trego Community, ranked No. 1 in 2A. Plainville lost 42-36 at Trego on Jan. 29. Dewey has averaged nearly 29 points a game this season.

Class 1A: Ingalls girls on a roll

Ingalls, which was ranked third in the Jetmore-Hodgeman County regional, has improved to 16-7 and is the second seed in the Dodge City regional behind Coldwater-South Central (21-2). The teams have two of the state’s best players with Ingalls’ Ashlyn Cure and SC’s Bri Rutherford. Cure has cleared 1,100 points and collects nearly 19 a game this season. Rutherford is over 1,700 career points and has averaged more than 20 a contest this winter.

In the regional, Ingalls had quality wins against Kinsley in the semifinals and then defeated Spearville, 56-42. While the Lancers have battled recent injuries, Ingalls had lost, 44-26, to Spearville on Feb. 8.

Clifton Miller has made 2.3 treys a game and has shot 33 percent from long range. He averages 19.8 points, 6.9 rebounds, 3.0 assists and 2.3 steals a contest. Miller has tallied double figures every contest. Aaron Skidmore has enjoyed a breakout season with 16.2 points and 6.5 rebounds.

South Central is extremely junior heavy with its top-three players all juniors. Owen Alexander leads with 19 points and 8.7 rebounds a contest, while Xavier Frazier has 12.6 points and 4.5 rebounds.

1A: Great girls’ regional at Pratt

Hutchinson-Central Christian, with no seniors, is 20-2, while Spearville is 18-4. South Gray girls, which have enjoyed a great season, is 19-4, and Cunningham is 20-3. CC juniors Josie Ibarra, Krysten Bartlett and Lindsey Kauffman have paced the Cougars to a seven-win improvement.

Spearville has sophomore Alissa Heskamp and junior Ehlaina Hartman who have combined for around 29 points a contest, though Hartman has recently been out. South Gray has received 12.8 points and 9.1 rebounds a contest from Hannah Askew, and Emma Jantz is at 3.7 assists a contest.

On the boys’ side at Pratt, St. John (19-4) is one of the darkhorses to make a deep push in 1A. The Tigers have lost three times to Central Plains and once to Hesston. Mason Osborne has enjoyed 13.3 points, 4.6 rebounds and 2.4 steals a contest, while Tanner Halling has 17.5 points, 7.6 rebounds and 3.6 blocks. Junior Marshall Woolf, a transfer from nearby Stafford, has 7.3 points and 2.7 rebounds with 15 treys.

1A Clay Center: Hanover girls looks to get back to state after Frankfort win; BSJT with great rebounding

Hanover was ranked seventh and went 2-1 against Frankfort this season. The Wildcats will have to contend with Doniphan West (13-11), Burlingame (10-11) and top-seeded Beloit/St. John’s-Tipton (18-2). BSJT features incredible rebounding with Kara and Elle Eilert and defeated Southern Cloud, 42-28, in the regional final Sunday. The Blujays led 18-1 at halftime.

1A Alma-Wabaunsee regional: top-four ranked teams likely to face off

At least one of the 1A girls’ top-four teams in the final rankings will not make the state tournament. No. 4-ranked Rural Vista is 22-0, while Frankfort stands at 21-2. Centralia is 16-6, and Southern Cloud is 12-7. RV, with standout senior Lauren Campuzano, has rolled through its schedule with a 62-33 regional title against Burlingame. Frankfort features Emilee Ebert, who has cleared 1,500 career points and has signed with Missouri State.

3A Hoisington girls: Norton, Russell and TMP with victories

Senior Emily Schippers continued to play well in the season’s biggest games with 18 points, six rebounds and three assists. She was two off her career high for points in a game. Sasha Wasinger had 10 points and three rebounds after she didn’t play last Thursday.

4A: Bishop Miege teams rolling; Baldwin girls No. 1 in 3s

The Bishop Miege boys went 18-2, won the Eastern Kansas League outright, finished undefeated at home and are the No. 1 seed in sub-state. It’s the best regular season record since the Stags went undefeated 11 years ago. The girls have been ranked first in 4A all season and were 17-0 at the time of seeding.

On the girls’ side, Piper remains undefeated and leading Sub-State 2 at 16-0. Sub-State 3 has 16-1 Baldwin and the defending Class 4A, Division II champions. Labette County girls graduated Tristan Gegg, a 2,000-point scorer, but have enjoyed another strong season with a 16-3 mark.

Baldwin leads the state with 6.9 treys per game and has three players, all seniors in double figures. Macey Frost averages 14.2 points, Kayla Kurtz is at 13.4 points, and Kate Ogle is at 10.6.

Frost is one of the state’s elite shooters with 66 made treys and 43 percent from long range. Baldwin has an elite offense with .99 points per contest and turnovers on just 20 percent of possessions.

Ulysses went 16-4 and finished 9-1 with a GWAC title, the first time the Tigers captured the GWAC. Ulysses has already enjoyed a two-win improvement from last year. The Tigers have won its last four contests and are the No. 1 seed in Sub-State 4.

Abilene (18-2) leads Sub-State 1. The Cowgirls won at Hays High on Friday, 52-40, and their two seniors enjoyed great year. Hannah Willey, a Washburn commit, shot 41.5 percent from beyond the arc this year, and senior Sydney Burton had her third double-double of the year in the Hays High win. Against HHS, Willey delivered 25 points and Burton had 20.

Pleasant Ridge was 18-2 after the victory and then earned the No. 1 seed in the Marysville sub-state. On Monday, PR improved to 19-2 with a 79-47 victory against Riverside. The program has never qualified for the state tournament.

On Monday, the top-four teams in the loaded Haven girls’ sub-state all held serve.  Cheney, Hesston, Haven and Halstead all entered with four or fewer losses. The first three teams ranked in the top-five in 3A. Cheney defeated Belle Plaine, 58-25. Halstead held off Wichita Collegiate, 43-28. Hesston defeated Kingman, 45-23, and Haven beat Chaparral, 50-18.

Yates Center’s Aaron King has enjoyed back-to-back outstanding seasons. He is averaging 22 points and 13 rebounds a contest, along with two assists, two blocks and two steals a contest. YC was co-champions of the Three Rivers League.

Yates Center is the No. 1 seed in the Arma-Northeast sub-state and defeated Uniontown, 51-21. Traditional power St. Mary's Colgan is the favorite in the sub-state but could see some competition with NE-Arma, Humboldt and Yates Center.

The Class 2A Meade boys sub-state is filled with talented players and ranked teams. Top-seeded Pratt Skyline, which set the state record for 3-pointers made in a game earlier this month, moved to 20-1 with a 75-36 win against Elkhart on Monday.

Last Friday, Maize South girls beat Goddard, 38-36, on a last-second shot from junior Katie Wagner and handed the Lions their only two losses of the year. Maize South is 20-0 and the only perfect team in 5A girls. Wagner helped Maize South stay in early when she scored the first eight points for the Mavericks. The Mavericks lead Sub State 1.

Goddard (18-2) paces Sub State 2 and has enjoyed a seven-win improvement from last season. The Lions have 15.6 points and 7.9 rebounds from senior Kade Hackerott. Goddard has a much improved offense from last year that scores 1.00 points per possession and turns the ball over just 18 percent of the time. McPherson girls have just one loss – to undefeated Derby – and pace Sub State 3.

Sub State 4 should have a great matchup between Wichita Heights (18-2) and Maize (17-3). Heights won the City League title, and Maize has its great seniors with Halie Jones and Alexis Cauthon. Heights leads 5A West in points per game at 64.

5A: Maize versus Ark City boys?

A highly compelling matchup could occur in 5A West where Maize (20-0) could see No. 8 Arkansas City (12-6). The game would feature arguably the state’s two best players in Maize’s Caleb Grill and Arkansas City’s Cevin Clark. Grill has 18.4 points and 4.6 rebounds a game, while Clark has averaged 33 points a game. Maize averages 1.10 points a contest, an outstanding rate.

The rest of 5A West’s top seeds are Andover Central (17-2), Bishop Carroll (15-5) and Wichita Heights (15-5). Carroll has a prolific offense with 1.08 points per possession and multiple quality wins, including a Dodge City Tournament of Champions title and a pair of victories against Heights. Carroll is a squad that is capable of repeating as Class 5A boys’ champions.

Salina Central boys pulled an upset against Andover Central in a 51-43 win last Friday.  AC has averaged more than 70 points a game. SC is the No. 5 seed at 15-5 and could face Wichita Heights in the sub-state title game.