v Faces in KS: Trace Leners - Sports in Kansas 
Warning: include(../includes/bodytag.php): failed to open stream: No such file or directory in /home/kansass/public_html/ks/news/index.php on line 36 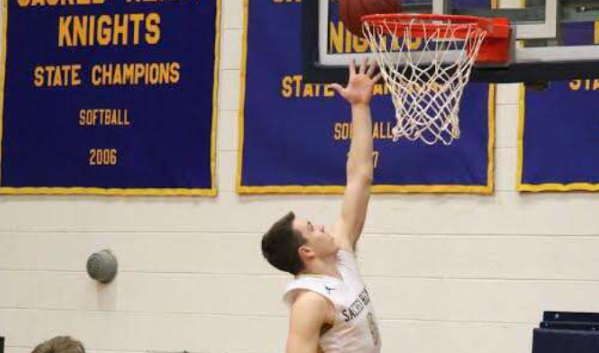 Trace Leners of Sacred Heart in Salina is having quite the senior year for the Knights. While his scoring isn’t blowing up by any stretch, he has one of the most complete stat lines in Kansas.

Leners, a 6-foot-0, 185-pounder, is averaging 7.7 points, 4.5 assists, 6.6 rebounds and 4.5 steals per game. While he may not score in double figures he does just about everything for his team. He earned first team all-league honors last year. His 4.5 steals per contest are among the best in all classes of Kansas, at one point this year it ranked #1 in the state.

Leners is a very successful multiple sport kid as well. He was a first team all-league receiver as a senior on the way to catching 40 balls for 691 yards and eight touchdowns. He also had 11 tackles on defense as a linebacker. It was a breakout year for him in football after his junior year he had his season cut short in one game after suffering two broken arms. Unfortunately, Leners has broken each of his arms twice in his career. He still had eight catches for 267 yards and three touchdowns in that one game. Leners is also a punter for the football team and earned all-state honors at the position. He also took fifth place in 3-2-1A tennis in state doubles. How many linebackers do you know that play tennis?

Leners will play football next season at Concordia University in Seward, Nebraska, where he could fit into multiple spots. He also gets it done in the classroom with a perfect 4.0 GPA. Leners could be a three sport all-state honoree in his classification by the time its all said and done.

For now, he is trying to get his team back to the 2A state tournament and by doing that they have to get through a tough sub-state. Sacred Heart (14-5) opens up 2A sub-state play on Monday as they take on Sterling at 7 pm. We caught up with the multiple sport senior below in the latest Q&A edition of Faces in Kansas.

This feature is presented by Salina Ortho. Proud to support local athletics. Find us online here or see our ad in the top right corner. Best of luck to Trace and Sacred Heart this season!

My mom played in college and put a ball in my hand at a young age, and I’ve been playing ever since

Make it back to the state tournament, and hopefully make a run for a State Title.

Yeah, we have the team that can make a run in the tournament. We have the experience of playing in big time games.

The ability to do a little bit of everything. Whether it’s on the offensive or defensive end, I am always in the mix of things.

Our team is an up-tempo team that likes to push the ball. We make the games enjoyable to watch.

My strengths are my abilities to defend the opposing team’s best player and my court vision. My weakness would be my ball skills.

Charlie Skidmore is a player who can score from anywhere on the court. He’s our go to scorer.

Tate Herrenbruck is a lights out 3 point shooter. Tate is a threat from anywhere on the court

Luis Mendez and Ethan Buckner have both stepped up and played key roles for us down in the post.

My favorite thing about basketball would be the team aspect. I enjoy spending time with my teammates and coaches.

I’m a wide receiver, linebacker, and punter for the football team. In the spring, I also play tennis

Playing for Coach Gormley is great. He always puts us in the best position to win games. He is so knowledgeable about the game and has taught me so much.

Coach Gormley opened the gym 2-3 times a week for us to come in a get shots up. We also attended a couple camps to get some games in along with playing some summer league games in Salina. Outside of school ball, I played several AAU tournaments to improve on my basketball skills.

I received some interest from a few colleges for basketball, but I ended up choosing to play football at Concordia University in Seward, Nebraska.

Go fishing or hang out with friends

In 10 years, I see myself working as an Orthopedic Physician Assistant.

My favorite subject in school is biology. I enjoy studying the human body. My GPA is a 4.0.

My role model is my father. My dad has shaped me into the person I am today. He is always pushing me to become the best that I can be.

I have broken my arm 4 times. Both arms twice