v Faces in KS: Carson Powelson - Sports in Kansas 
Warning: include(../includes/bodytag.php): failed to open stream: No such file or directory in /home/kansass/public_html/ks/news/index.php on line 36 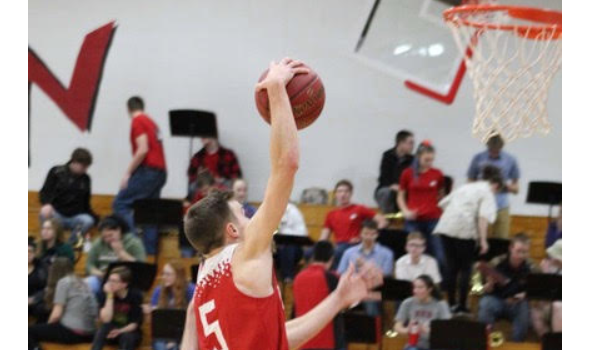 Carson Powelson, senior at Anderson County High School in Garnett, Kansas, is putting together quite the senior season of basketball for his 4A high school.

The 6-foot-1, 160-pound, combo-guard, is averaging 20.2 points per game, 6.3 assists per game and 5.6 rebounds per contest. His stat line is one of the most complete in the state of Kansas for a guard in 2018-2019. He had a breakout game against Girard, then ranked #3 in 3A, as he went off for 27 in the win. He's one of the more underrated players in Kansas that a lot of people aren't talking about, until now. He seems to be on our statewide 20+ point list just about every time we have it out after game days. But he's not just a scorer as you can tell by his complete stat line, he's a great ball handler and distributes the basketball very well.

He’s also a two-time state qualifier in golf. He also gets it done in the classroom as he holds a 3.5 GPA at Anderson County High School.

Powelson has had an impressive two-year career at Anderson County after attending Wellsville until the end of his sophomore year. AC has suited him better as it was a much closer drive and family living in the area. Powelson tells us it’s one of the best decisions he has ever made for him and his family.

For now, Powelson’s sites are set on getting back to the state tournament, this year in 4A. Last year the Bulldogs went in 4A-II but the new classifications are a tad bit different from one year ago. A lot of 4A-II schools are now in 3A, while Anderson County went to 4A, the old 4A-I. With 6A, 5A, and 4A expanding to more teams (36 per class) we’ve experienced some changes in 2018-2019.

AC is currently 12-5 on the year with two games remaining on the regular season schedule. They’ll be back in action on Monday night against Osawatomie before taking on highly touted Santa Fe Trail on Tuesday.

We caught up with the senior student athlete below in the latest Q&A edition of Faces in Kansas.

This feature is presented by Anderson County Booster Club. Proud to support the Bulldogs and best of luck to all of our teams in 2019

I got involved in basketball by playing with my older brothers and bitty ball as a young kid.

The main goal for me this season is to make it back to state and do some damage in the tournament.

Yes, we have experienced a sub state championship and have been to the state tournament. Also, I feel like our team is very experienced this season due to having four returning senior starters.

I have a great support base from my coaches and teammates.

Our basketball games are well attended by our community. Last year we really brought the school and the town together by making our big state run and winning league.

Our school works hard to bring our community together through good play on the court and support from our band, cheer, and dance squad.

As a player I take care of the ball, have good ball handling, team orientated, a good shooter and my weakness is I hate to lose.

Each player on the team plays a specific role and shows leadership. Our team has very good chemistry and we never blame each other for our mistakes.

Being out there with my teammates making memories. Also, how it brings my family and friends together for moments we will look back on for the rest of our lives.

I play golf also for fun and have made it to state my freshman and junior year, sophomore year I couldn’t participate because I transferred to Anderson county from Wellsville.

Coach makes the game fun, he treats us like we are family, and he expects us to work hard. I’ve been blessed to have two outstanding coaches in high school that have taught me so many things and have not only shaped me into a better basketball player but an even better person.

Our team went to many tournaments, spent several hours practicing, participated in a summer league that allowed us to play many competitive games.

As of right now I am undecided on my plans but am keeping my eyes open for a basketball opportunity.

My favorite thing to do other than sports is being outdoors and spending time with my family and friends.

In my near future, I see myself being an athletic director because the love I have for sports.

Deciding what my favorite subject would be is too tough of a choice, I enjoy many of my classes and can’t only pick one. I am a well-rounded student and currently have a 3.5 GPA.

My role model is my grandpa who passed away when I was in middle school to cancer. As a little kid we nearly spent every day together and he taught me so many things about life and work ethic.

Tradewinds is the hot spot for our community especially after our basketball games, we enjoy walking in and seeing all the joy we bring to our community.

I attended school at Wellsville High School until end of my sophomore year, then transferred to Anderson County High School as it suited me better and was a much closer drive due to my family living in that area. It turned out to be one of the best decisions I have ever made for me and my family and the friends I have made will last me a lifetime.