v Faces in KS: Ashlyn Cure - Sports in Kansas 
Warning: include(../includes/bodytag.php): failed to open stream: No such file or directory in /home/kansass/public_html/ks/news/index.php on line 36

Ashlyn Cure is over 1,100 points in her career for Ingalls. (Photo: Brooke Jantz) 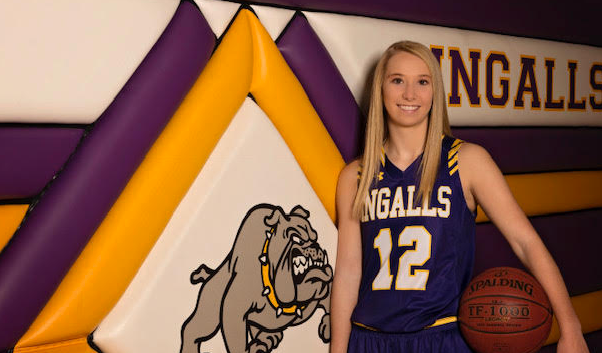 The 2015-16 Ingalls girls’ basketball team was a veteran squad that featured six seniors. The group included Kaisha Batman, a career 1,000-point scorer, Hope Beach and Jordyn Cure, a key outside shooter. The team had just two freshmen, Odalys Escobedo, a little-used reserve, and Cure’s sister, Ashlyn, the first player off the bench.

In ’15-16, Jamie couldn’t come to games because of Michael’s health. On Jan. 15, 2016, Ingalls played Coldwater-South Central in a matchup of two undefeated teams.

Early in the contest, Beach went down with an ankle injury, and Ashlyn had to play more. She finished with nine points on 4 of 5 shooting in a 52-29 victory. The contest was the first big performance for Cure, now a senior, a 4.0 student and rare four-sport standout.

“I actually got a lot of playing time in that game, and I was doing pretty well,” she said.

At that time, it marked her second-most points in a contest. Jordyn finished with three assists. Ingalls, which used just six players, pulled away with a 22-4 second quarter.

Then-coach Roger Thurlow, now at Fredonia, wrote that Ashlyn was “phenomenal.” After the win, the Cure’s mother, Staci, told her daughters that Michael had passed away. He was 37.

“She played great defense and had her best offensive game of the season,” Thurlow wrote in an email last Thursday. “I remember she made an amazing play just before half when she split a double team off a pick and roll with a crazy behind the back dribble and scored on an and one. We went to win one of our biggest games of the season, but unfortunately after the game the girls heard the news of their uncle’s passing, and they were devastated.”

Michael resided in Hays with his wife and two children. Ashlyn said her family is “really close” and she saw Michael every year for holidays like Thanksgiving, Christmas and Easter.

As well, the Cures have long had family gatherings in Hanston and played pickup games in the Elks’ old high school.

“He had a good personality and everyone enjoyed having him around, but it was definitely sad when the time came,” Cure said.

The following Tuesday, Ingalls had another game on Michael’s funeral, and defeated Kiowa County, 50-47. Cure still has her basketball shoes from that year and said she will “probably keep them forever.” Ingalls eventually went 21-3 and took third in Class 1A, Division I.

“One of the most amazing things about those impressive young ladies is that the following Tuesday they went to their uncles’ funeral, then traveled over two hours to help us win another tough game against Kiowa County,” Thurlow wrote.

Since then, Cure has continued to remember Michael as she has enjoyed an outstanding career. Cure is one of the state’s most accomplished athletes in the class of 2019. This winter, for the first time since her freshman year, Ingalls played on Jan. 15.

Jordyn texted her sister “good luck and play for Uncle Michael.” Ashlyn dedicated the game to him. On her Twitter, Cure has “RIP M.C.” with a heart. On Jan. 15, she posted “Tonight’s for you, M.C.” also with a heart.

“That year me and my sister dedicated our basketball career to him, and we wrote stuff on our shoes for him,” Ashlyn said. “And then we actually had to play a game when his funeral was, so it was a very emotional two weeks for us, but we just dedicated our career to him, especially that year.”

After her freshman year, Thurlow left for southeast Kansas after an impressive decade run with the Bulldogs. Ingalls graduated 79 percent of its scoring. Cure immediately had to take on a much bigger role and has helped lead Bulldog volleyball, basketball and cross country teams since her sophomore year.

“It was a huge transition,” Cure said. “But I actually think being able to play with those seniors my freshman year did get me prepared. Those were an amazing group of seniors.”

Ingalls basketball has posted marks of 14-7, 14-8 and 13-7 the last three winters for coach Terra Simon. She has averaged at least 14 points and four rebounds every winter since her sophomore year.

“Instead of just kind of being a key player on the team, I knew I had to be a very good player,” she said.

This year, Cure is the only senior and leads the team with 18.2 points despite coming back from a variety of injuries suffered in the fall. She also has 3.8 rebounds, 2.4 steals and 2.3 assists per contest. In January, Cure went over 1,000 career points.

Ingalls features sophomore Regan Ast (11.4 points, 4.5 rebounds) and lone junior Britlyn Beach (8.9 points, 8.8 rebounds). A team captain, Cure has received interest from small colleges and expects to major in either physical or occupational therapy. She was all-state honorable mention as a sophomore and second team all-state last season along with her high level academics. Cure is also an avid outdoorsperson and has hunted with her father several times.

“I absolutely hate being behind on anything,” Cure said. “… I just love to get my work done and get it done the right way and have good grades.”

On Monday, Ingalls plays host to Macksville (4-15) in the first round of the Class 1A regionals. Start time is 7 p.m. The 5-foot-6 Cure has been remarkably consistent in career with just four single-figure performances in the last two years, all this winter. Ingalls is 0-4 in those contests. Overall, she has played in 82 career games with 1,115 points.

Known for outside shooting, Cure has made 29 treys with 33 percent from long range this winter. Cure has also focused more on driving. She has made 33 free throws and shot 83 percent from the line, the best marks of her career.

“Something that my dad has been telling me is to attack earlier, and just get things going earlier for the team, because someone always has to start it,” she said.

In 2015, Ingalls volleyball qualified for state. The next fall, Cure was the only returning player for volleyball.

“That year was basically just bonding, chemistry,” Cure said. “We had the skills we needed, we just needed to bond together and know who goes where and who does what, and figure out who our setter was, and who are hitters where, and where our back row would be.”

The Bulldogs, with no player above 5-8, again reached state. Then-coach Kim Batman, now at Montezuma-South Gray said in 2016 that, at the beginning of the year, she didn’t expect Ingalls to go back to state.

“We are blessed and fortunate to be able to play this year,” Batman said at the time.

Simon served as the cross country coach. Her daughter, Kaylee, was a terrific runner. They talked Cure and a group of Ingalls girls into running. Simon was seventh and Cure finished in 13th for all-state. Cure had to manage her time well and sometimes ran after volleyball practice.

“It’s been really great,” Cure said of Coach Simon. “I have known her since I was younger, and so have all the other girls, but we bonded really well together just being together, and she is very motivational for everyone, so that was really nice to have that. And she always pushed us to do our best, and she is always very encouraging for even volleyball, too, even when we did cross country, and always made sure we were on top of things and that we were all doing fine.”

After the ’16 success, the girls decided to do both sports again in ’17. Ingalls volleyball went 23-12 and cross country again took second.

“Our coaches were very flexible with that,” Cure said. “And allowed us to skip some practices and go to the meets, but overall, it’s just been really great.”

In ’17, Simon replicated her seventh place state finish, sophomore Hailey Minet was No. 19 and Cure finished No. 39 with freshmen Alexa Lightner and Aryca Brandon in 43rd and 44th, respectively. Cure earned the squad’s Most Inspirational award in ’16 and ’17.

“It definitely put a lot of toll on all of us just having to do two sports at once, but it was definitely worth it being able to be state runner-up two years in a row,” Cure said.

In track, Cure was a state qualifier in the 800-meter run in 2016. In the last two years, she earned two state medals: sixth in the 3,200-meter relay in ’17 and eighth in the relay last year. This fall, though, Cure grew and suffered injury with too many activities. She fought ankle, shin and specifically her hip problems.

“Every time I did anything, it hurt extremely bad,” she said.

Cure, though, never missed a volleyball match or a cross country race. She rested in the break between the end of fall sports and the start of basketball.

“Don’t ever quit, no one likes a quitter. Keep working hard for what you want, that’s always been something that’s been around my life, just with people at school and even around my home life,” Cure said.

Cure attended physical therapy for several weeks with stretches, massages and running on a treadmill. Once she returned Cure has continued to perform at her high level.

“I just fought through it most of the time,” Cure said. “And then practices just not doing very much at all, and just laying low for a little bit, so I got to compete in everything that we had.”