v Sports in KS: Around the State Wrestling Update -2/14/19 - Sports in Kansas 
Warning: include(../includes/bodytag.php): failed to open stream: No such file or directory in /home/kansass/public_html/ks/news/index.php on line 36 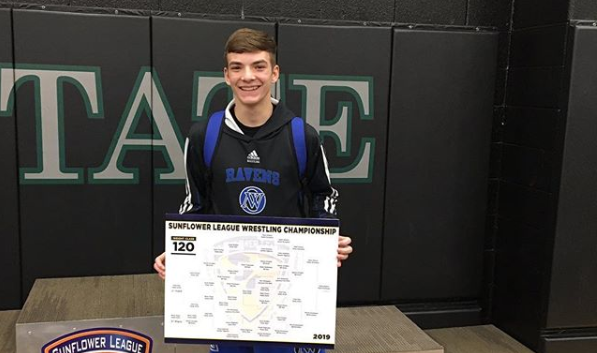 Last weekend marked the final week of the regular season before regionals on the boys’ side this Friday and Saturday. Many boys’ teams either had the week off or competed at league tournaments.

As well, the girls had its third annual unofficial state tournament at McPherson High School. Girls’ wrestling is up for KSHSAA sanctioning this spring and many expect it to pass and become an official KSHSAA sponsored sport for next year.

McPherson won with 113 points, while Fort Scott was second at 110, Spring Hill third at 92, and Great Bend took fourth with 76 in a tournament where 78 teams scored. The tournament featured multiple national ranked wrestlers and was a great day of competition and camaraderie.

Before the tournament, Amy Fearnside, a USA national team wrestler, talked to the girls and presented McPherson coach Doug Kretzer with an award for his work with growing Kansas girls’ wrestling. Multiple brackets had A pools for the top competition, B and C pools for more and less experienced wrestlers.

At 106, Nickerson’s Nichole Moore, ranked No. 8 nationally, went 5-0 and won the championship. Moore, who is 33-7 this year, was not expected to wrestle in the tournament. However, she was sick last week and ended up pulling out of the Central Kansas League boys’ meet and competed at girls’ state for the first time. Moore has a good chance to qualify for Class 4A boys state at the 4A regional tournament this weekend. Moore has 33 wins versus boys this winter.

At 113, Marysville’s Elise Rose, who has wrestled against boys most of the year, captured the title with a 4-2 victory against Rose Hill’s Anayka Besco. At 120, Andover Central’s Anja Tschohl, who has signed with Colorado Mesa, finished 14-1 this year and won the finals match by fall.

At 126, McPherson’s Mya Kretzer, also ranked No. 9 nationally and headed to Baker, completed her brilliant career, went 19-0 against girls this season and won her third straight girls’ title.

At 160, Fredonia senior Mason Claibourn, No. 14 nationally at 15-0, pinned her way through the bracket. She is a three-time state placer and two-time champion.

Freshman 170-pound Ava Mull from Larned went 14-0. Junction City junior Elisa Robinson, who is ranked second nationally, rolled through the bracket at 182 including a win in 40 seconds in her finals match. She went 6-0 this year.

At 195, Atchison County’s MaKaea Forbes went 14-0 in her senior season with a title, and Nickerson’s Harley Kuntz captured the 220/285 crown.

Forbes, Claibourn, Tschohl and Jones were four of five wrestlers to have five pins. Forbes had the least total pin time in 3:06, and Claibourn was second at 4:39.

Hutchinson coach Mike Garcia, who has coached for 36 years, had his last home dual last week against Salina Central. Garcia captured three team titles overall, two in his 25 years with the Salthawks. Garcia had a large number of family, former wrestlers and coaches at the dual versus SC. Garcia’s son, Cody, a three-time state champion at Hutchinson, is in his fourth year as the Baker University coach.

Entering the weekend, Manhattan was ranked second in 6A, and Washburn Rural stood fourth. The teams remained the same after last week’s close Centennial League tournament.

Taylor and Douglas remained third and sixth, respectively, in 6A.

Sauder stayed fifth in 6A.

Island-Jones is ranked fourth, and Wilson is first.

White is second and Carter third again this week in 6A. Schlepp stands second in 6A.

Murray is ranked first, as is Williams.

Sabetha moves up in 3-2-1A rankings

In the last set of rankings before regionals, Sabetha had a jump from sixth to fourth, one of few rankings changes in the classification. The biggest change occurred at 160 when junior Walker Lowdermilk went from unranked to third this week.

He had a dominant run with wins by fall in 1:17 and 44 seconds and then defeated Riverside’s Kinstin Juhl by fall in 3:56 in the finals. Last week, Juhl was third and dropped to fourth this week after Lowdermilk’s big victory. Lowdermilk improved to 24-4, and Juhl is 26-5.

Holton captured the six-team Big 7 title with 193 points, and Sabetha was second at 128. At 126, Sabetha’s Kaden Dillon won the title with three falls and moved to 16-4. At 145, Riverside’s Luke Horn matched up with Sabetha’s Kamden Brownlee.

Sabetha continued to dominate at the upper weights with 220-pounder Cauy Rokey and 285-pound Elliott Strahm. Rokey is ranked third, and Strahm is first. Rokey (17-1) had a bye and won by fall in a combined 2:01. Strahm had just two matches and won in 14 seconds and 58 seconds.

In the 13-team Sunflower League, Olathe North won with 239 points, 32 ahead of Lawrence Free State. Olathe South was third at 193. They are ranked eighth through tenth, respectively, in 6A.

At 120, Olathe Northwest’s Howard moved to 40-0 and captured conference wrestler of the year honors. After a bye, he won by fall in 57 seconds and 3:05. In the first-place match, Howard defeated Shawnee Mission Northwest’s Charles Brockman, 4-3, for the title. Brockmann dropped to 25-3.

At 113, ONW’s Brady Pellman captured the title and improved to 35-9 with a major decision, a fall in 3:33 and a 6-3 decision. Pellman is ranked fourth after he was not ranked last week.

For Olathe North, Keegan Slyter (38-4) captured the title at 126 with a bye, two wins by fall and a 12-5 decision versus Lawrence Free State’s Lou Fincher (27-5). Last week, Fincher was ranked first and Slyter third, but now Slyter is first and Fincher is second.

At 106, Lawrence freshman Kevin Honas won and moved to 27-8. He had three pins, tied for second in the field, and had the smallest total pin time at 2 minutes, 12 seconds among wrestlers with three pins. Honas stayed fifth in 6A.

At 145, Lawrence Free State’s Elijah Jacobs (19-4) won the title, while Gardner-Edgerton’s A.J. Rodriguez won in sudden victory against Olathe Northwest’s John Redmond in the 152 final. Rodriguez is 29-11, Redmond 26-14. Jacobs is ranked first in 6A.

Free State collected another crown with Devin Beers (28-5) at 182. He is fourth in the rankings.

Weber is ranked first in 4A.

Pelland delivered four victories by fall and then a 15-4 major decision. Dipman collected wins by fall in 45 seconds, 28 seconds and 1:14.

Ball is unranked, while Pedigo remains first in the classification.

Beloit, which will host a 3-2-1A regional this week, captured the NCAA league title. Beloit, which is not ranked in the top-10, earned 177.5 points, and Minneapolis was second with 124.5. However, the Trojans will not have senior 152-pounder Zane Colson scoring points in the postseason. Colson co-ops with Beloit, but has to compete with his school, Mankato-Rock Hills.

Colson, who recently signed with Kansas Wesleyan for both football and wrestling, had five pins – the most of any wrestler. His total pin time was 10 minutes, 31 seconds. He tallied 30 individual points. Colson is 32-0.

Minneapolis will be at the Beloit regional next week and took second with 124.5 points. The Lions, currently unranked, have been all over the rankings this year, including No. 2 behind Colby in the Dec. 11 poll.

Hauck is second, Wilton sixth and Villalpando is first.

Bonner Springs captured the last two Kaw Valley League championships and then won the Frontier League in its first season in the conference. The No. 5 team in 5A, Bonner had 218 points, well ahead of second-place Ottawa (156.5) and third place Paola (151).

Tonganoxie is ranked fifth in 4A.

In the 106-pound final, Tonganoxie’s Grayson Sonntag faced Bonner Springs’ Derek Duffett. Sonntag is ranked second in 4A, and Duffett is third in 5A. Sonntag won, 10-4, and improved to 36-4, while Duffett dropped to 28-8.

At 113, Bonner’s Cassius Vanderpool faced Louisburg’s Cade Holtzen. Vanderpool is second in 5A, and Holtzen is sixth in 4A. Holtzen won by fall in 5:39 and moved to 28-3, while Vanderpool dropped to 29-6.

Another ranked finals match came at 152 between Tonganoxie’s Korbin Riedel and Bonner Springs’ Joe Tapia. Riedel won 8-3 and improved to 34-0, while Tapia dropped to 32-7. Riedel is ranked first in 4A, and Tapia is fourth in 5A.

The weight class also featured K.C. Piper’s Anthony Ferguson, who is ranked fifth in 4A, and Paola’s Brendan Ohlmeier. Ferguson is 33-9, and Ohlmeier stands at 26-11 after Ferguson won by fall in 3:58 for third place.

No. 1-ranked Martin of Paola wins

At 170, Piper sophomore Brandon Martin, ranked No. 6 in the classification behind five seniors, took the crown with wins by fall in 44 seconds, a tech fall and a 13-6 decision.