Wiltfong signed to play football at FHSU and is one of the best wrestlers in 3-2-1A at 220. 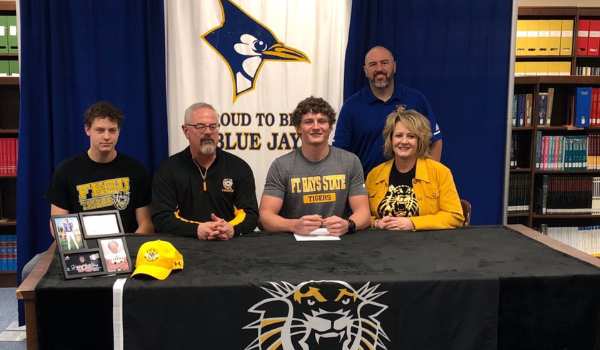 Norton senior Hayden Wiltfong and his family lived a block away from his grandparents, Jim and Sherry Showers, in Edmond. Wiltfong and his brother, Judson, were very close to their grandfather and saw him often.

Jim, 73, was in poor health and passed away Jan. 10 at KU Medical Center, the day before the prestigious Newton Tournament of Champions wrestling tournament. Michelle Wiltfong, Jim’s daughter and Hayden’s and Judson’s mother, was with her father the entire week in Kansas City.

Michelle told her sons that Jim would want the boys to compete at Newton.

“I just wanted to go out there and make him proud,” Wiltfong said. “I was just trying to wrestle for him, because I knew that he was in a better place now, and I just knew that he was looking down on me watching me.”

Wiltfong took third at 220 pounds and had the top finish of any Norton wrestler. He defeated multiple ranked wrestlers by fall, and only lost to Newton’s Wyatt Hendrickson in the semifinals, his first defeat of the year.

“I just wanted to go out there and wrestle for him and being there with my friends, my team, kind of helped me feel better about it,” Hayden said. “And kind of helped me take my mind off of it for a little bit.”

Hendrickson, an Air Force commit, has been ranked third nationally. Judson, a junior, finished 3-2 and had a solid showing at 195 pounds. After Newton, Hayden stood 15-1, Judson 16-6.

“There was a tough decision,” 30th-year Norton coach Bill Johnson said. “And I told the family. I said, ‘Family is much more important than this little game we play call wrestling. So by all means, I want you to do what you feel is best.’ And without any doubt, all of them said, ‘Nope, his grandfather told them that he wanted them to be wrestling for him.’” So they went to Newton and did pretty well.”

A week later, Norton dualed Colby at home in a matchup of top 3-2-1A schools.  The dual started at 195 so Hayden and Judson could leave early and attend the family viewing for their grandfather. Hayden, currently ranked second in 3-2-1A, pinned Colby senior Tucker Branum, ranked fourth, in 90 seconds.

Branum scored an early reversal. At that point, Hayden had only allowed points to two wrestlers all winter: Hendrickson and Branum. Hayden is a two-time state placer with fifth as a sophomore and fourth last winter.

While Hayden has helped lead a Norton wrestling squad that has vaulted up the rankings this winter, he also recently signed with Fort Hays State for football on National Signing Day last week.

Wiltfong also had a preferred walk-on spot from Kansas State. In his career, Wiltfong had 211 career tackles, 30 tackles for loss (16 this year), 23 sacks, seven forced fumbles and 54 catches for 698 yards and eight scores. Fort Hays coach Chris Brown offered Wiltfong later than the other schools, his standard practice.

“I don’t really offer a kid until he gets here on campus,” Brown said. “I want to make sure that the kid is serious about us just as we are as serious about him.”

Norton is a longtime wrestling powerhouse with Johnson, including five straight titles from 2013-17. This year, the Bluejays have just 17 wrestlers. At the start of the season, Norton was not ranked in the top-10. Cole Amlong was third at 160, and Wiltfong was second at 195.

Johnson has significantly stressed for his wrestlers to not compare themselves to past Norton squads and instead “carry the torch for you individually.”

“I want you to be the best team that you can possibly become,” Johnson said. “If we are in the top-10 in the state tournament, I would be thrilled with that.”

Johnson routinely has wrestlers significantly improve throughout the winter and earn state medals after they had little in-season recognition. Johnson has a theme each year and has considered the “Norton No-Names” this season.

“That’s what I strive for every year is to get somebody (placing) that nobody knows about,” Johnson said.

The Bluejays have moved as high as second in 3-2-1A and currently sit third behind Colby and Eureka in a wide-open classification. Norton will compete at the 3-2-1A WaKeeney-Trego regional this weekend with state the following week in Hays.

At Newton, Wiltfong won by fall over Derby’s Tyler Allen in a minute, then defeated Marion’s Charlie Nordquist by fall in 43 seconds. After the Hendrickson loss, Wiltfong pinned Goddard’s Trenton Willert in 39 seconds. In the third place match, he pinned Wichita Northwest’s Josh Carter in 1:49.

“Our coach always tells us don’t worry about winning or losing,” Wiltfong said. “He’s like ‘This is a big tournament, just go out there and have some fun and just compete to the best of your abilities.’ I just tried to do that every match.”

Nordquist has been ranked third in 3-2-1A at 220. Willert is currently fourth in 5A, and Carter is fifth in 5A. Carter, one of the state’s top football players, can squat 590 pounds but is 5-foot-10. Wiltfong believed his height helped in the match. Johnson tells his wrestlers “technique beats muscle.”

Wiltfong is well-known for his pins. Including out of high school competition, Wiltfong is 31-7 in the last year with 30 pins, according to his Track Wrestling page. On Feb. 2, he lost to Davenport, 3-1, in the final of the Phillipsburg tournament. Davenport is 30-0, and Wiltfong is 23-2.

“He is 6-foot-6 and he has a wingspan of about seven feet, and people are not used to that, and he cradles, and everybody in the state and nation knows it coming,” Johnson said. “But it’s very hard to stop when you’ve got someone with that length, and he’s very strong this year. He didn’t have any trouble down in Newton taking care of most of the competition, so he’s a real man this year, and looking really, really good.”