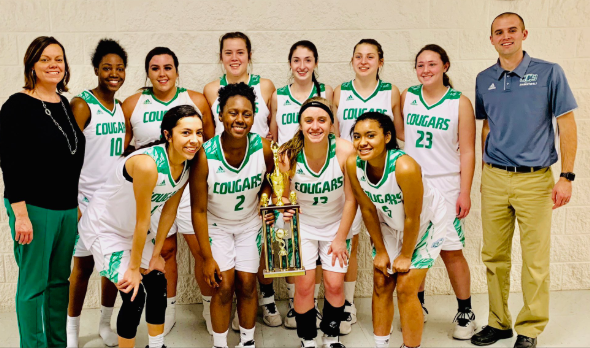 Last season, Hutchinson Central Christian girls’ basketball went 13-10 and lost to Hartford in the first round of the Class 1A, Division II state tournament. The Cougars have enjoyed a steady climb under Jason Hett, also the school’s sixth-year athletic director. Hett took over for Erin Patrick after 2012-13 when the program won just three games.

Since then, the Cougars have captured two, eight, 13, 14 and 13 again last year. However, the Cougars struggled some in close games last winter. Central Christian went 6-7 in games decided by nine points or fewer.

This year, the Cougars have 10 players on the roster and zero seniors. However, CC has improved and enjoyed a much better record in close games. The classification was split into Division I and II before it went back to one class this winter with 117 teams.

The Cougars are 16-2 with several quality wins. In an extremely deep and talented classification that features multiple Division I/Division II prospects, CC was first ranked No. 10 in the Feb. 4 poll. The Cougars are 8-1 in games decided by nine points or fewer.

“The close games that we have been in this year, we’ve just made some big plays down the stretch,” Hett said. “Some winning plays that have really won us the ball game, and last year we didn’t really necessarily make all those plays, and I think it just comes down to experience, and the girls just understand the game more.”

“Girls played basketball, but there was really no program, and so we have worked really hard on establishing a program,” Hett said. “…Our motto is ‘like Christ,’ so we try to model Christ in everything that we do, both on and off the court.”

CC averages 40 points a game and Ibarra delivers 10.1 points, 6.1 rebounds, 3.9 assists and 2.1 steals. She leads the team in points and assists, ranks second in rebounds and is tied for second in steals. She also has a team-high 14 blocks and 17 threes. Ibarra has started since her freshman year, and Kauffman played often as a freshman.

Ibarra ranks No. 9 in Kansas in assists per game, just behind Plainville junior Aubree Dewey, one of the state’s best players, according to the MaxPreps statewide list. Ibarra carries a 1.76 assist/turnover ratio, top-20 in the state. As well, Ibarra is a standout 1A track athlete who took fourth at state in the 800-meter run, fifth in the 400-meter relay and qualified for the 1,600- and 3,200-meter relays last spring.

“They have done a nice job down the stretch of winning some close ball games and making some big plays whether it’s on defense or offense,” Hett said. “And we’ve had a different girl step up at different times, so that’s been fun to see. It’s been fun winning those close games, and seeing their work pay off that way.”

Additionally, the Central Christian boys had to replace standout Nate Heneha. CC boys are 11-7 behind Adam Hall, an offensive talent, and Caleb Lambert, an excellent defensive player and the Most Inspirational Player of the Burrton midseason tournament for coach Adam Clark, in his 24th year with the program.

“I was excited for him when he got that,” Clark said. “To me, that’s probably the top award you can get, because that says a lot about you as a person, not just a player.”

Against Berean, Ibarra had 11 points, including 3 of 7 from beyond the arc, with five rebounds and four assists. Since 2010, Central Christian had been 1-4 versus Berean with three straight losses.

“Our defense down the stretch in that ball game was the best I have seen all season long,” Hett said. “We had girls in the right spot and stepping up and making big plays, getting big rebounds, so that was a good win. That was a nice win for us. Berean is one of those teams that you just know that they are always going to be good. They are well-coached. I was excited for the girls to get that win.”

Since 2007, the Cougars had been 2-10 against South Barber and had lost six straight in the series before the victory. Versus SB, Central Christian held the Chieftains to 23 percent shooting, was plus-8 on the glass and had six fewer turnovers.

On a per-possession standpoint, CC has been exceptional with defensive efficiency and has permitted just .49 points per possession, a mark under several 1A state titlists in recent years.

Central Christian has turned the ball over on just 21.9 percent of possessions, a strong rate, and also recovered 31.2 percent of available offensive rebounds, a solid mark. Overall, Ibarra ends 14.6 percent of her team’s possessions and has a turnover just 15.1 percent of time.

“It’s a group that has really come together, and they are fun to coach,” Hett said. “They are fun to be around, and I am not afraid to put any of them in the ball game.”