v Sports in KS: Around the State Wrestling Update (2/7/19) - Sports in Kansas 
Warning: include(../includes/bodytag.php): failed to open stream: No such file or directory in /home/kansass/public_html/ks/news/index.php on line 36

Mason Jameson of Frontenac is now ranked #1 in 145 and was MOW at Circle. 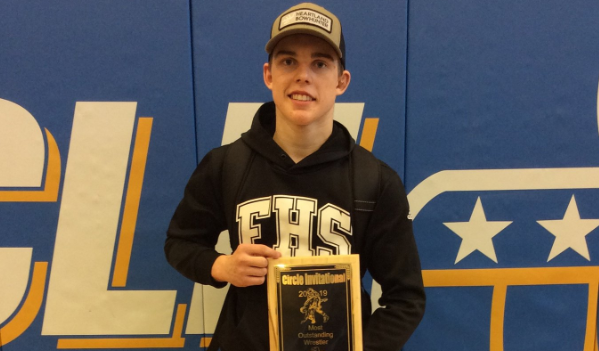 For the third straight season, McPherson will host the unofficial state girls’ tournament on Saturday. Start time is 9 a.m. Girls’ wrestling continues to significantly grow and a large number of coaches, wrestlers, media and fans have supported the sport earning KSHSAA sanctioned status next year.

The KSHSAA Board of Directors will vote in April on a proposal to sanction a high school girls’ tournament.

According to numbers released from McPherson, the first state tournament had participants from 37 high schools. Last year, 55 schools represented. This winter, at least 71 squads are expected to participate, from Class 6A Wichita South to 1A Tribune-Greeley County.

McPherson has enjoyed big seasons from multiple wrestlers, including nationally ranked Mya Kretzer, who has wrestled most of the season against boys. Kretzer is up to No. 9 nationally at 127 pounds in the latest Flo Wrestling rankings released Wednesday afternoon.

Nickerson’s Nichole Moore, who is 33-7 against boys this season, is up two spots to eighth at 106. Moore has won multiple boys’ tournaments and was second at Circle last weekend. Paola sophomore Jordyn Knecht is No. 15 at 117. Fredonia senior Mason Claibourn is No. 14 at 152. Junction City junior Elisa Robinson moved from third to second at 180.

As well, Haley Schafer leads the Bullpup girls with 20 victories, according to statistics released by the team. Kaleigh Marbut paces the squad with 18 falls and 26 takedowns, and Cat Palacios is first with eight reversals, and Arriana Gross has 12 escapes.

Many of the top girls from the Wichita South tournament are expected to be at the state meet. Other WS champions featured Wichita Southeast’s Eleanor Breen at 106 pounds, and Buhler’s Payton Warkentin at 113 pounds.

Warkentin has enjoyed a strong year and won her finals match by technical fall, 18-1. In the 120/126 division, Andover Central’s Anja Tschohl won by fall against Marbut in 1:14.

Great Bend’s Breanna Ridgeway captured the title at 132, Draziare Cameron of Wichita West won at 145, and Douglass’ Jewella Cokeley defeated Giddings, 7-0, for the title at 152/160.

At 170/182, the state tournament could feature a very close bracket. Fort Scott’s Mersaide Roof won the bracket, but she, Great Bend’s Kyeal Mogbo and McPherson’s Madison Skytte all went 1-1 against each other.

For many teams, especially high-level 3-2-1A squads, the Panther Classic represents the final major tournament before regionals in two weeks. The 16-team competition had an extremely close race with Minneapolis winning with 111 points. Abilene was second at 107, while Beloit and Norton tied for third with 104. Norton and Rossville tied for fifth at 102.5.

Minneapolis has made one of the biggest jumps among any program from last season. The Lions were fifth at the 2018 Panther Classic with 78 points. Marysville captured the tournament last winter with 148.5 points, but didn’t compete in the tournament this year.

The 3-2-1A standings remained the same in the top-5 with Colby, Eureka, Norton, Hoxie and Plainville.

Hauck’s four pins tied for second in the field and he had a cumulative fall time of just 3 minutes and 29 seconds. Overall, Minneapolis’ 16 pins led the field, one ahead of Abilene. The bonus points helped capture the title.

Last winter at the 195-pound bracket in the 3-2-1A state tournament, Brookville-Ell-Saline’s Nick Davenport beat Hayden Wiltfong by fall in the third/fourth place match. This season, Davenport/Wiltfong have been ranked 1-2 all year at either 195 or 220.

They met up for the first time this season and Davenport defeated Wiltfong, 3-1, in the title. Davenport is 30-0, and Wiltfong dropped to 23-2. He has only lost to Newton’s Wyatt Hendrickson and Davenport, both undefeated wrestlers. In the semifinals, Davenport delivered another quality win versus Beloit’s Creighton Johnson, 3-0. Johnson is 24-7.

Ell-Saline had just three wrestlers in the tournament and 285-pounder Noah Hopkins (14-16) was the only other placer with a sixth-place showing at 285.

In the last week, Davenport has signed with Butler County and WIltfong with Fort Hays, both for football. Davenport and Wiltfong remained 1-2 in the classification.

While Colby and Norton have more depth, Hoxie continues to be in the strong mix for a Class 3-2-1A state championship because of its elite talent and ability to win titles.

At 120, freshman Drew Bell (28-5) took the championship with wins against Phillipsburg’s Aaron Lenker and Fredonia’s Hunter Reddick, although the Reddick match was an injury default. Currently, Bell is second, and Reddick stands fifth.

At 132, Dylan Weimer (27-6) captured the championship with two falls in a combined 3:38 and a 7-1 decision. At 160, Dayton Porsch bounced back from his loss at the Garden City Rocky Welton Invitational – his first since his freshman year – and easily cruised through his bracket. Porsch (33-1) captured his three matches by three first-period falls, including in 1:17 against Norton’s Brandon Vacura (24-5) in the championship.

Both Weimer and Porsch remained in the same spots – Weimer is sixth at 132, and Porsch is first at 160.

Schields is still sixth at 106, Unterseher stayed fifth at 126 and Vacura retained his No. 5 spot at 160. Sproul and Judson Wiltfong are both unranked.

Top-ranked senior 152-pounder Zane Colson, who competes for Rock Hills but co-ops with Beloit, improved to 27-0 with falls in 41 seconds, 60 seconds and 4:19.

Cimarron won the nine-team Leoti Round Robin with 126 points, 17 ahead of Leoti-Wichita County and Lakin was third with 82 points.

Lakin won four titles, including at 285 with Hadley Panzer (31-0) and earned Sports In Kansas American Implement Southwest Kansas team of the week. Panzer stayed second in 3-2-1A as the Broncs’ lone ranked wrestler.

Sabetha, with its elite talent, is looking to become the first 3-2-1A state wrestling champion from the east side of the state since Atchison County won in 2000 and ’01.

Last week, the Bluejays went to the seven-team Fairbury (Neb.) Invite and took third with 104 points. Two Nebraska teams, Beatrice and Milford, were the top-two teams.

At 285, Elliott Strahm (15-0) stayed perfect. Strahm, who continues to receive plenty of Division II football offers and PWO Division I offers, had just two matches and won by fall in eight seconds and 28 seconds.

None of the Sabetha rankings changed this week.  Strahm is first at 285, Rokey is third at 220, and Brownlee is fourth at 145.

Derby is first in 6A, Bonner Springs is fifth in 5A, McPherson is unranked in 5A, Chanute is second in 4A, and Salina Central is tenth in 5A. Burlington, Winfield and Andale are 6-8, respectively, in 4A.

Radke (33-1) took the championship at 160 for McPherson with a win by fall and three victories by technical fall. He stayed second at 160. At 170, Jonah Clarke (29-7) finished third. Rhett Edmonson, ranked fourth at 138, did not compete for the Bullpups.

Lindsey and Wills have both signed with Oklahoma State wrestling. Braungardt has been No. 1 in 4A at 182 and pinned Willis in 63 seconds. Wills has captured his first three wins in 24 seconds, 71 seconds and a technical fall.

Braungardt won by fall in 1:22, by technical fall, and by fall in 5:41 before the championship.

At 152, Joe Tapia (30-6) captured the title with a 2-0 final against Burlington’s Cael Johnson (30-2). Tapia won by fall in 33 seconds, technical fall and then had two more falls. The Braves had a significant of top finishes, including third place from Derek Duffett at 106.

The 4A rankings again went through big changes this week. Scott City is still No. 1, but now followed by Chanute, Marysville, Frontenac, Tonganoxie, Burlington, Winfield, Andale, Prairie View and Ottawa.

The Blue Comets had another big showing with the lower weights with champions at 106 and 113 pounds. Trent Clements (30-5) took the title at 106 with a great, 4-3 decision versus Maize South’s Ian Demoss in the final. At 113, Kolton Misener (29-7) was the champion with a 5-0 decision against Jayhawk Linn’s Brody White in the final. White is 24-6.

Frontenac wins at Circle; Jameson with 1/2 victory; Raiders with big move in the rankings

Frontenac’s large leap in the 4A rankings from unranked to fourth came with its big performance at Circle. The Raiders collected 209 points in the 26-team Circle tournament, well ahead of Eureka at second place with 153.5 points. Keith Akin and staff have built this program from the ground up that is in its ninth year.

At 145, Mason Jameson won by fall against Clearwater’s Darryl Rylant for Rylant’s first loss of the season. They flip-flopped 1-2 in the rankings. Jameson is 28-5, and Rylant is 32-1. Jameson was named the Tournaments Most Outstanding Wrestler