v Sports in KS: Around the State Wrestling Update- 1/23/19 - Sports in Kansas 
Warning: include(../includes/bodytag.php): failed to open stream: No such file or directory in /home/kansass/public_html/ks/news/index.php on line 36

Taylon Peters is ranked second at 182 in 5A 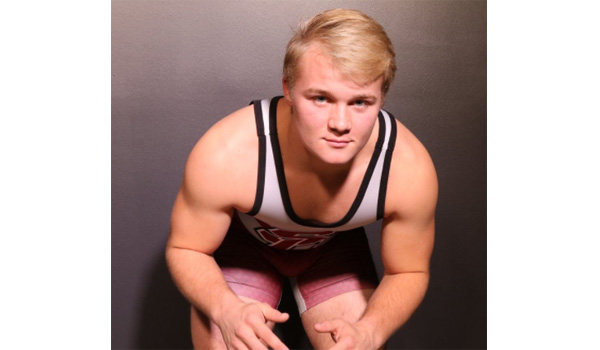 Newton senior Wyatt Hendrickson, who has signed with Air Force, stayed No. 3 in the country. St. James junior Cade Lautt is ranked No. 16, and El Dorado senior Braden Morgan is No. 17. In Kansas, Hendrickson and Lautt stand 1-2 in Class 5A, and Morgan is No. 1 in 4A.

The longtime Bob Kuhn Prairie Classic at Hays High drew 24 teams this season. Haysville Campus was first at 175.5, while McPherson was second at 156. Pratt took third at 148, followed by Salina Central at 137.5.

Campus remained seventh in 6A. Garden City is fifth in 6A, and Great Bend is seventh in 5A. Both GC and GB did not move from its positions last week.

At 138, Nathan Bowen (25-4) took second and earned a quality win versus McPherson’s Rhett Edmonson in the semifinals. Edmonson is 28-2 this year and eventually finished third. Bowen delivered a 7-5 victory. In the finals, Great Bend’s George Weber continued his perfect season, moved to 31-0, and won 2-0.

Weber and Edmonson flip-flopped places in the 5A poll. Weber now stands third.

Bowen bumped up a spot from third to second at 138.

At 152, Luke Bowen (28-3) delivered a title with four wins by fall. He was one of three wrestlers to finish with four falls, and Bowen had easily the least pin time in 6 minutes, 7 seconds. In the championship, Bowen delivered a signature victory against Pratt’s Kadence Riner, 7-3. Riner is 26-2 this year.

At 195, Brycen Schroeder (21-4) took third in a loaded weight class. Schroeder’s only defeat came against Hoisington’s Wyatt Pedigo, 6-4, in the semifinals.

At 126, Taylor Parrett (12-13) finished sixth as the No. 16 seed, and the 10-place seed difference was the largest of any wrestler in the tournament. Parrett won four of his first five matches and went 4-3 in the tournament.

In arguably the biggest match at the Prairie Classic, Salina Central’s Taylon Peters moved up a weight class and defeated Hoisington’s Pedigo, 7-2. Peters is 19-1, and Pedigo took his first loss of the year to drop to 23-1.

As well, SC had multiple other quality finishers. At 126, Drew Burgoon (22-0) stayed perfect and remained third in 5A.

In the semifinals, he tech falled Phillipsburg’s Jacob Sisson, a defending state champion, and in the final, he won by tiebreaker versus Great Bend’s Carsyn Schooler, 3-1. Schooler dropped to 26-6. Schooler is sixth in 5A at 126, and Sisson is fifth in 3-2-1A.

McPherson into the Class 5A rankings

McPherson has delivered a solid season and bumped into the Class 5A rankings for the first time this season at No. 9.

At 160, Scott Radke (28-1) delivered a championship with a tech fall win versus Pratt’s Jadon Koehler in the championship. Koehler moved to 23-6. Radke is second at 160 in 5A, and Koehler is unranked for the Greenbacks.

Lakin’s Panzer stays perfect at 285; McPherson’s Perkins into 5A poll

The 285-pound bracket was very strong with Lakin’s Hadley Panzer, McPherson’s Alex Perkins and Garden City’s Refugio Chairez. In the semifinals, Perkins defeated Chairez, 8-6. Perkins is 13-3, and Perkins stands at 16-5.

Panzer is second in 3-2-1A, Chairez stands second in 6A, and Perkins is into the 5A rankings for the first time at No. 6.

In Class 4A, Devon Weber (28-0) garnered the title at 106. After a first-round bye, Weber earned a victory by fall in 28 seconds. In the semifinal, Weber defeated Ulysses’ Quentin Pauda, 7-2. In the championship, Weber beat Kapaun’s Bubba Wright, 4-2. Wright is 26-3.

Koda Dipman (21-7) took third at 120 in addition to the runner-ups from Riner, Koehler and Blankenship.

Great Bend with multiple champions; Spragis into 5A poll

In addition to Weber’s 31-0 record and title, Jeffrey Spragis (19-5) took first at 132 pounds. He had three victories by fall and one by major decision before the final. In the championship, Weber defeated Buhler’s Adam Whitson, 7-5, in sudden victory. Whitson is 20-3.

Spragis is now fourth in 5A after he was not ranked last week.

At 145, Gage Fritz (30-1) delivered the title in four different ways: by tech fall, fall, decision and a 9-1 major decision versus Buhler’s Nick Elliott in the championship. Fritz is third in 5A.

Smoky Valley earned the title at the nine-team Nickerson tournament. SV had 195 points, while Nickerson was second at 179.5. Wichita North was third at 117.

Wampler was one of 10 wrestlers who had at least four pins. He had the second-least amount of total pin time in 6:42. Chapparal’s Jarrett Angle was first at 6:01. However, Angle took second at 126.

Nickerson’s Nichole Moore captured the championship at 106 pounds. Moore (25-6) had a dominant run with victories by fall in 1:39, 54 seconds, a technical fall, a forfeit and a win by forfeit in 15 seconds.

Maize, ranked third in 5A behind Goddard and Arkansas City, captured the 21-team Blue Valley Northwest Invitational with 218 points. Bonner Springs took second with 204 points, and Blue Valley was third with 151.

In a high profile match, Bonner Springs’ Cassius Vanderpool defeated Maize’s Junior Camacho, 2-0, in the 113-pound final. Vanderpool moved to 23-5, and Camacho dropped to 21-6. They are ranked second and third, respectively, in Class 5A.

Vanderpool had one of the biggest jumps of any wrestler. He was unranked last week and is second this week. Camacho dropped from second to third.

In addition to Cassius Vanderpool, Bonner Springs, which stayed ranked No. 5 in 5A, had several titlists.

Cruz Lara (20-7) captured the championship at 120. Lara, ranked fourth at 120 in 5A, defeated Shawnee Mission Northwest’s Charles Brockmann, 3-2, in the finals.

Willis is ranked third behind Hendrickson and Lautt and has also enjoyed a dominant year with a 25-2 record. He won four matches by fall, all in 56 seconds or less.

The 20-team Beloit Invite had to move times up because of the weather. Blue Valley Southwest won with 198 points, Marysville was second at 184, Colby took third at 164, and Abilene took fourth at 145. Beloit took fifth with 99.5 and Hoxie was sixth at 89.5.

Blue Valley Southwest is fourth in 5A, Marysville stands third in 4A, Colby is first in 3-2-1A, and Abilene is ninth in 4A. Abilene moved into the poll this week. Hoxie bumped up from ninth to fifth in 3-2-1A.

For BVSW, Hayden Mills (24-5) was first at 106 pounds with a 7-4 win versus Clay Center’s Rhett Koppes in the championship. Mills stayed second in 5A, and Koppes dropped from third to first in 4A.

Koppes took his first loss and dropped to 23-1.

Joseph Dennison (24-4) was first with 126 pounds and defeated Oberlin’s Drew Juenemann, 11-4. Dennison stayed second in 5A.

He earned his first two matches by tech fall, then won by fall in his next two matches. In the championship, Porsch beat Concordia’s Hunter Schroeder by fall in 1:53. Schroeder dropped to 19-2.

Weimer is unranked, and Bell is second at 120.

Colby with multiple high finishers; Voss to No. 1

The Eagles didn’t capture a title, but had multiple second- and third-place showings. At 106, Tyler Voss, ranked first in 3-2-1A, took second. Voss moved from third to first.

Aschenbrenner is third in 3-2-1A, while Johnson and Finley stand at 2-3, respectively.

Both wrestlers stayed in their respective rankings – Novotny is fifth and Champoux second.

Simma scored 55.5 points, first among all wrestlers in the tournament. He remained fifth at 145.

Chanute captured the 18-team Paola tournament with 193 points, and easily won against Webb City (Mo.), which finished with 148 points. Paola took third at 128.5 points, and Anderson County was fifth at 124.

Mitzner moved into the rankings at No. 5, and Misener, who was sixth, dropped out of the poll.

Logan McDonald is fourth at 132.

He fell to Prairie View’s Gavin Cullor, who moved to 26-0 with a technical fall victory. Cullor is ranked first.

At 220, Dallas Higginbotham (24-6) captured the crown with a 2-1 tiebreaker versus Webb City (Mo.)’s Matt Miller. Other Higginbotham is ranked at No. 6 in 4A. He was ranked in the same spot last week.

At 138, Frontenac’s Riley McDaniel continued his great season, moved to 22-0 and defeated Pittsburg’s Reece Watson, 14-2. McDaniel moved up to No. 1 from No. 2 and exchanged spots with Scott City’s Kaden Wren.

Will Jameson of Frontenac took first at 152 against Wellsville’s Anthony Signs. Jameson is ranked sixth in 4A with a 9-2 mark and moved into the poll.

At 285, Sean Ryan, ranked No. 1 at 285, captured the title versus Tyler Hoffman of Carl Junction (Mo.). Ryan moved to 18-2 and won by fall in 50 seconds. Ryan had a dominant run and tied for the most pins by any wrestler (four) and had by far the fewest total pin time in 4 minutes, 26 seconds.