Frisbie had a big month in leading Cheylin. 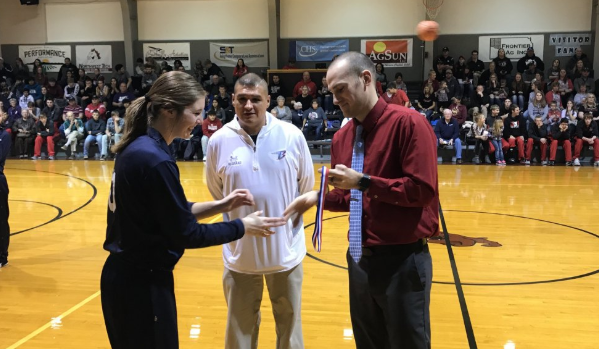 Bird City-Cheylin senior Jesie Frisbie has enjoyed another big year for the 6-2 Cougars. Last winter, Frisbie averaged 11.5 points and 9.4 rebounds for an 11-9 squad that had just one senior, Rachel Keltz, who paced the team with 15 points and 4.1 blocks.

Through the first six contests, Frisbie has averaged 17.3 points, 8.8 rebounds and 2.7 assists, all team bests, and has all five of the Cougars’ blocks. The only other senior is her twin sister Josie. She is third on the squad in scoring at 6.8 points per game and also averages 3.2 rebounds. Junior Grace Sabatka is second with 13 points and 5.7 rebounds.

Jesie, at 5-foot-10, has tallied at least 13 points in each of the first six contests and shoots 46 percent from the field. She has a pair of double-doubles with 18 points and 11 rebounds in a season-opening 46-39 loss to Wallace County, and then delivered 20 points and 10 rebounds in a 39-27 win versus Palco on Dec. 14.

On Dec. 8, she helped Cheylin avenge its loss to Wallace County with a 20-point effort in a 56-47 victory. Cheylin’s only other loss was a 49-40 defeat to Golden Plains on Dec. 7 in the Sagebrush Shootout at Brewster. GP, unranked in Class 1A, is 8-0 and had its second-closest margin of victory versus the Cougars.

Cheylin is under first-year coach Brad Porubsky and assistant Forrest Burr (Zweygardt). Burr was a senior captain on the 2011-12 team.

Porubsky, formerly the junior high coach, took over for Max Keltz, now the boys’ coach. Keltz, who has coached in various roles for nearly 30 years at Cheylin, led a five-win improvement last winter. Cheylin’s high-water mark in the last 13 years was a 13-8 record in ’13-14.

Last season, Cheylin, one of the state’s smallest schools, had just nine players listed on the roster. This winter, the Cougars have 16. Cheylin has significantly slowed the pace from 74 possessions a contest in 2017-18 to 59 this season.

Even without Rachel Keltz’s blocks, Cheylin’s defense remains virtually the same. Last year, the Cougars allowed .614 points per possession. This year, it’s .624. However, the offense has significantly jumped from .606 points scored per possession to .746 this year.