v Sports in KS:Around the State Wrestling Update (1/10/19) - Sports in Kansas 
Warning: include(../includes/bodytag.php): failed to open stream: No such file or directory in /home/kansass/public_html/ks/news/index.php on line 36 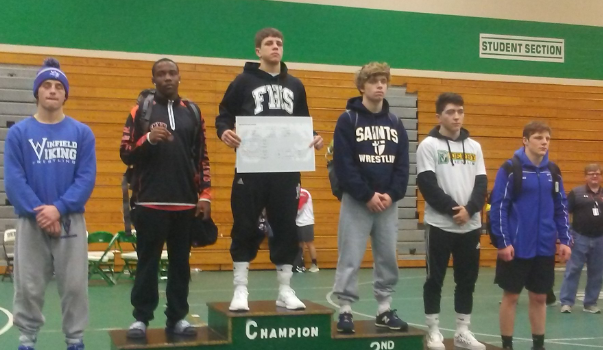 In a theme of last week, several powerhouses won their own tournaments. Derby, ranked No. 1 in 6A, collected the crown at the 35th annual Derby Panther Invitational in the 14-team competition with 293.5 points. Aquinas, ranked fourth in 5A, was second with 268.5 points.

At 132, Cason Lindsey (13-5) was second. He is ranked third in the classification. Cooper Ross (8-2) stands fourth in the rankings and was also second. Ross fell to Aquinas’ Jared Simma in the final by forfeit. Simma is 23-1.

The 220 weight class was a high-profile matchup between St. James’ Cade Lautt, ranked second in Class 5A, and El Dorado’s Braden Morgan, ranked first in 4A. Lautt moved to 29-0 and dropped Morgan to 9-1 with a 4-3 victory.

In the other weight classes, Kapaun’s Bubba Wright, ranked sixth in 5A, earned the 106 title with a 5-3 win versus Campus’ Dylan Sheler, ranked third in 6A.

At 113, Campus’ Kale McCracken, ranked first in 6A, stayed undefeated at 18-0 with a 5-0 victory versus Winfield’s Braden Ledford. He is ranked second in 4A.

At 120, Mill Valley’s Zach Keal, ranked first in 6A, moved to 22-5 with a 13-5 victory versus Shawnee Northwest’s Charles Brockmann, who is sixth in the class.

At Burlington, McPherson, which remains outside of the top-10 in 5A, won the tournament with 258.5 points. It marked the second straight year the Bullpups earned the boys’ and girls’ crowns.

McPherson senior Mya Kretzer, a nationally ranked wrestler, wanted to stay in Kansas and listed Baker and University of St. Mary has her top-two choices earlier this winter. On Jan. 7, Kretzer, via Twitter, announced her verbal commitment to wrestle for Baker next year. Kretzer said Kansas was “such an important place in my heart, I don’t think I could have made a better choice.” Kretzer, like last season, has mainly wrestled on the boys’ varsity, including a 1-2 mark at the Burlington tournament.

In one of the tournament’s biggest matchups, Eureka senior Kolby Beitz faced Burlington’s Evan Totty. Both are ranked No. 1 in 3-2-1A and 4A, respectively. Beitz (16-1) defeated Totty, 6-3, and dropped Totty to 18-1. Totty won his first three matches by major decision and two by fall.

At 132, Ethan Totty moved into the rankings at No. 6 in 4A with a championship performance. Totty (16-0) earned three wins by fall in a combined seven minutes and then beat Fort Scott’s Jacob Stinnett, 7-0, in the final.

At 152, Burlington junior Cael Johnson remained third in the rankings and moved to 20-0. Johnson earned two wins by fall, then a 5-1 decision and a 9-1 major decision in the final versus Silver Lake’s Scott Kuhn (15-2). Kuhn is ranked second in 3-2-1A.

Rural, ranked third in Class 6A behind Derby and Manhattan, easily earned the Shawnee Mission South Invitational with 269 points. Lawrence Free State, ranked tenth in 6A, had 190 points for second.

WR showed great strength at 106 when Bishop Murray faced his teammate, Jacob Tangpricha, in the final. Murray, a sophomore, is ranked No. 1 at 106 and won every match by fall, including by 1:27 in the final – easily his longest match. Tangpricha is 16-2.

Rural has the No. 1-ranked wrestlers at 182 and 195 pounds with junior Gavin Carter and senior Preston Williams, respectively. Carter (14-0) pinned Junior Blue teammate Drake Graybeal in the final.

David Huckstep (20-2) is unranked at 285, but won another title with another dominant run. He earned crowns in 13, 48 and 21 seconds and by injury default in the final.

Newton senior Wyatt Hendrickson, ranked No. 1 in 5A at 220 and one of the country’s top wrestlers, rolled through the bracket in the 23-team tournament. Hendrickson helped Newton finish ninth with 97 points.

Hendrickson was the tournament’s most dominant wrestler regardless of class with four falls in a combined time of 2 minutes, 58 seconds.

No one else had four falls in a combined time better than 6:01. Hendrickson also recorded the tournament’s fastest fall in 10 seconds.

In the final, he defeated Skiatook (Okla.)’s Corbin McLaughlin and gave McLaughlin (13-1) his first loss of the season.

Nickerson’s Nichole Moore, another nationally ranked wrestler, continued her success against the boys with an impressive showing at 106 pounds. Moore (11-5) took third and only lost to Quentin Pauda. She had a 4-0 decision, a win by fall, a 9-1 major decision and a fall.

The 16-team J.R. Durham Invitational is one of the longest-tenured northwest Kansas wrestling tournaments. Held at Norton, Scott City had 176 points and Norton was second with 155 points.

Cozad (Neb.) was third with 128 points, and Hoxie took fourth at 108. Norton vaulted from seventh to second behind Colby – which won the five-team Salina South Invitational – in the latest 3-2-1A rankings.

Scott City flipped spots with Maize and took over the No. 1 spot atop Class 4A.

For Scott City, Zach Rohrbough (11-4) collected the title at 106 pounds with three wins by fall. He remains unranked.

At 138, Kaden Wren (15-1) won all three matches by fall, including a fall against Blue Valley’s Bryce Goswick in the championship. McDaniel and Wren retained their No. 1 rankings.

At 170, Wyatt Hayes (16-0) continued his dominating year in a series of high-profile wins. He beat Smith Center’s Ethan Peterson by fall, then held off Norton’s Cole Amlong, 7-2, in the semifinals before he pinned Oakley’s Morgan Rains in the championship. Amlong took third and is 13-3.

For Norton, Camdyn Unterseher (12-3) moved into the state rankings with a title and a 2-1 finals victory against Oberlin’s Drew Juenemann in the finals. Juenemann dropped to 16-4.

Juenemann stayed at fourth in 3-2-1A, and Unterseher, unranked before Christmas, moved to third.

At 160, Hoxie’s Dayton Porsch and Norton’s Brandon Vacura had a key matchup of ranked opponents. Porsch, a three-time state champion and Division I University of Northern Iowa signee, earned a win by fall in 63 seconds. Porsch is 20-0, and Vacura stands at 12-2. They are ranked 1-6, respectively, at 160.

At 152, Beloit’s Zane Colson, ranked No. 1, stayed perfect with a 13-0 record. Colson, who attends Mankato-Rock Hills, had a bye, two wins by fall and a 6-2 decision in the championship.

Chanute moves up two spots to fourth in 4A

At the Perry Tournament of Champions, the Blue Comets held their own in a 21-team tournament that featured primarily Oklahoma schools. Chanute was tenth with 97 points, and Arkansas City took third with 153.5 points. Host Perry (Okla.) easily won with 235 points.

Chanute is ranked behind Scott City, Marysville and Winfield.

Sophomore Trent Clements, ranked third at 106, is 7-2 this season and took a pair of losses in the tournament. Freshman Kolton Misener (7-3) earned sixth place. At 138, junior Parker Winder (9-3) was fifth and went 5-2 at the tournament.

Junior Brady McDonald, second-ranked at 145 pounds, took third with a victory by fall, three decision victories and a 13-1 major decision. At 170, Brayden Dillow is unranked, but took fourth.

The Eagles captured the nine-team Maize Invitational with 229.5 points, well ahead of runner-up Pratt, which finished with 166.5 points. Eisenhower was third at 158, and Andale took fourth at 133.

Camacho is ranked second, Campbell first and Hughbanks is unranked.

Maize stayed third in 5A behind Goddard and Arkansas City.

Pratt slipped from third to eighth but had several big performances. At 106, sophomore Devon Weber, ranked second in the classification, moved to 19-0 and defeated Maize South’s Ian Demoss in the finals. Demoss is ranked fifth in 5A.

While Eisenhower is not ranked in the top-10 in 5A, Andale improved from seventh to fifth in the 4A rankings.

For the Indians, sophomore Caleb Pavlacka is ranked fourth at 106, and sophomore Hector Serratos is third at 120. Pavlacka (9-4) was third and Serratos (15-4) captured a title.