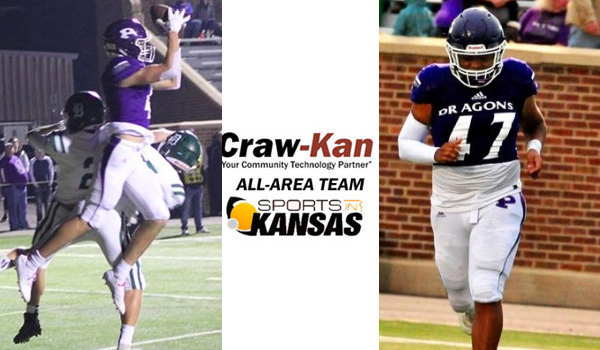 Sports in Kansas has released the 2018 Craw-Kan "Your Community Technology Partner" Southeast Kansas All-Area Football Team. Players are made up from the CNC, SEK (plus Pittsburg, Parsons) and TRL leagues in Kansas. Every week Sports in Kansas releases a "Craw-Kan Team of the Week" from the Southeast Kansas area. Visit Craw-Kan online here.  Craw-Kan now offers gigabit fiber in Pittsburg and Frontenac! PARENTS/ATHLETES: Every player on the list below is eligible for an All-Area 1st Team, 2nd Team or Honorable Mention patch by emailing sportsinkansas@gmail.com

All-Area Offensive Player of the Year

White, a 6-foot-2, 180-pound senior, was a human highlight reel in 2018, earning Sports in Kansas 4A Player of the Year. He had over 800 yards receiving as a senior and hauled in 14 touchdown receptions. White, who has several Division I FCS offers, is also one of the fastest players in the state with 4.43 speed. He also had five interceptions on defense, two of which went for touchdowns.

All-Area Defensive Player of the Year

Butcher had over 100 tackles for the Dragons for the second consecutive year, his second year in a row to lead the team in tackles. The 6-foot-0, 235-pound, senior, linebacker, was one of the best players in 4A this season and was a Sports in Kansas 4A Defensive Player of the Year Finalist.

All-Area Coach of the Year

Sarwinski led the Bulldogs to their second semifinal appearance in school history as Galena fell to eventual state champion Sabetha in the 3A sub-state championship on the road. Galena (11-1) was the CNC league champion and dominated everything in their path. He also picked up his 100th career win in the come from behind win over Marysville in the state quarterfinals this season. Sarwinski has created a total team atmosphere in Galena, who has become one of the most consistent teams in Southeast Kansas over the last 10 or so seasons.

All-Area Newcomer Coach of the Year

Kurt Friess led Parsons to a complete turnaround in 2018 and their first playoff win since 1976. Parsons ultimately loss to eventual state champion Sabetha in the state quarterfinals but picked up two playoff victories in 2018. It was one of the best turnaround stories in the area for 2018.

Fowler led the Indians into the the playoffs in 2018 with a 6-3 record as a first-year head coach. The three years prior to him, the program had five total wins. Fowler, a Lockwood native, came from Spearville where he won a state football title in 2015 in 8M-I. It was quite the turnaround for Oswego who we expect to make an even bigger improvement in 2019.