v Faces in KS: Nena Taylor - Sports in Kansas 
Warning: include(../includes/bodytag.php): failed to open stream: No such file or directory in /home/kansass/public_html/ks/news/index.php on line 36 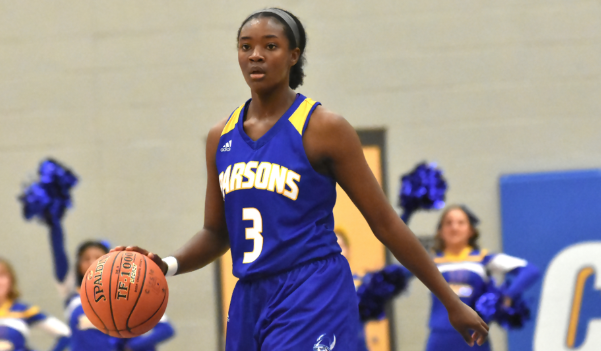 On Dec. 11, Parsons faced Pittsburg on the road in the Southeast Kansas League opener. In the preseason, the SEK coaches picked Labette County to win the title with Pittsburg second. Parsons and Chanute tied for third. Parsons was 1-9 in its last 10 meetings versus Pittsburg.

Behind 30 points from standout senior Nena Taylor, Parsons earned a quality 45-39 win against the Purple Dragons. It marked Parsons’ biggest margin of victory in the series since a 49-27 win versus Feb. 15, 2011.

The win encapsulated Parsons’ improvement and Taylor’s play. Last winter, Parsons finished 12-10, 6-6 in conference, the first winning season for the Vikings since a 17-5 mark in 2011-12. Parsons enjoyed a seven-win improvement from two years ago.

In 2018-19, the Vikings are 4-2, 2-0 in SEK play. Taylor averaged 12.5 points and 7.2 rebounds as a sophomore. Last year, she delivered 21.9 points and 10.9 rebounds. She has collected first team all-league the last two falls and earned honorable mention all-state as a sophomore and second team all-state last winter. She should clear 1,000 career points in January.

Taylor, a point/shooting guard, set a goal to average 25 points a game this year, along with winning the midseason tournament at Southeast Cherokee, a sub-state title and reaching the Class 4A state tournament. Last year, Parsons was third at the Southeast tournament. The Vikings have not reached state since 1993.

The 5-foot-8 well-rounded Taylor, like her role model Maya Moore, stars on and off the court. Moore, with her collegiate career at Connecticut and professional play with the Minnesota Lynx, is one of the best women’s players of all time and is known for her advocacy in society.

“When I first started watching college basketball, she was one of the first players I was drawn to,” Taylor said. “She’s such an amazing person on and off the court. As a player, I try to be as dominant as her on the court.”

This winter, Taylor has four 30-point contests, all Parsons victories.

“Some strengths I have are my ability to get to the basket and weave my way through defenders,” Taylor said. “At times my weaknesses can be dribbling. If I am attempting to do too much, then I will make a mistake.”

Overall, helped by improved long distance shooting, she averages 27.5 points per game for a squad that returned four starters for coach Mike Krull.

Sydney Krull is a three-year starter, and Ally Hicks is a two-year starter. Newcomer Alex Johnson has been a key factor.

“Johnson will bring some height to help protect the basket, something we have lacked in previous years,” Taylor said. “Dakiah Yates is an incoming freshman and I expect good things from her with her length and athleticism.”

In addition to the Pittsburg win, Parsons nearly pulled off one of the state’s biggest upsets on Dec. 8 against host Circle in the final of the T-Bird Classic in the AVCTL vs. SEK showdown.

Circle, ranked third in Class 4A, is 6-0 this season and 45-9 since the start of the 2016-17 year. Including this winter, Circle has captured three straight T-Bird Classics and won 10 straight tournament games.

In the semifinals, Circle defeated Labette County, 31-24. On Dec. 11, Circle beat Augusta, 36-24. LC is ranked fifth in 4A, and Augusta is eighth in 4A. In the preseason, Labette County was fourth and Augusta fifth.

In the finals, Parsons, which has been unranked all winter, lost 60-51 to Circle in double overtime. Taylor delivered 20 points. Parsons controlled the game throughout with a 15-10 lead after the first quarter, 22-17 after the second quarter and 31-28 after three.

If Parsons had won, it would have marked the first time this year a top-3 team in girls’ 4-6A had lost to an unranked team. Circle has lost just one home contest since the start of last winter. Taylor earned all-tournament honors.

Taylor, though, could pivot Parsons’ success and history the rest of the winter, too. The Vikings have never made a state championship appearance and have just two final fours, in ’83 and ’86. Parsons’ only other two state showings came in ’84 and ’93, according to Kansas historian Carol Swenson.

Taylor started to play basketball at the Parsons rec center from first through fifth grade. She began travel basketball in fourth grade and played up a grade. Taylor has played on travel teams with Coffeyville and Wichita.

Taylor has a 23.5-inch vertical with a 200-pound squat, 135-pound clean and 200-pound deadlift. She is a three-year starter with offers from Colby, Labette and Pratt Community Colleges. She comes from a very athletic family as her brother was a state champion high jumper, going 7'0" for Parsons a few years back and her father played football at Pittsburg State University.

As well, Taylor was second team all-league volleyball in 2016 and first team all-conference in ’17 and ’18. She has reached state track the past two springs in the 1,600 relay.

She enjoys English and has a 3.67 unweighted GPA and would like to be a kindergarten teacher. Taylor likes to volunteer, sing in the choir and is involved in many clubs. She is a Senior Girl Scout and recently completed her Gold Award.

“English is my favorite subject because we get to write different types of papers,” Taylor said. “In those I get to express my true self. I’m very involved in my school.”

This feature is presented by Eye Care Associates of Parsons, Dr. Wayne Gilmore and Dr. Craig Newland, are proud supporters of Parsons High School Athletics. Best of luck to Parsons this season and congrats to Nena on being one of the top players in the state of Kansas! See us online here

I began playing basketball at the rec center in Parsons from first through fifth grade. I began playing travel basketball in 4th grade and my dad played us up against 5th grade teams.  Then my sixth-grade year I joined a traveling team out of the Pittsburg/Frontenac area. I then joined the Coffeyville Magic from eight grade to this past summer.  In addition to the Magic I joined a second travel team out of Wichita TMK(Red) which allowed me to play in the Super 64 tournament in Texas and was able to showcase my talents for several college coaches.

My goals for the season are to average at least 25 points a game. For the team to win our mid-season tournament in Southeast and be sub-state champions and make it to state!

I believe we do. We have a lot of seniors, so I feel we should have an advantage. We also have some younger kids that can come in and do good things.

My versatility, strength and ability to shoot from long distance gives me several opportunities to be effective on the court.

Our gym is loud, and the student section is involved. The fan base for the girls’ basketball program has gotten better over the years.  Last season we had a lot more support and it felt good. It always feels amazing when the team has the student section and fans cheering us on during the game.

I play with a lot of heart and emotion. I am a very competitive player that wants to win every game. I feel I am an entertaining player to watch because sometimes I even surprise myself with some of the shots I make.

Some strengths I have are my ability to get to the basket and weave my way through defenders. At times my weaknesses can be dribbling. If I am attempting to do too much, then I will make a mistake.

Sydney Krull who is a three-year starter. Ally Hicks who is a two-year starter. Newcomer Alex Johnson will bring some height to help protect the basket, something we have lacked in previous years. Dakiah Yates is an incoming freshman and I expect goods things from her with her length and athleticism.

My favorite thing about basketball is when the crowd goes wild. After I or someone on my team does a nice move and then finishes or hits a big shot. That is the best feeling ever.

I play volleyball and run track. For volleyball I played middle front and back. For track I run the 4x4, 4x1, and I might possibly get back into hurdles this year.

Coach Krull gives me a lot of freedom when on the court. He looks to me to create and to also be a leader on the floor.

We played in a summer basketball league in Arma, Kansas. We also participated at the Lane Lord Women’s Basketball Team Camp at Pittsburg State and Galena’s’ Team Camp. Me personally, I played on two different traveling teams. Coffeyville Magic out of Coffeyville, KS and TMK out of Wichita, KS. I played 40 plus basketball games this past summer. I also attended Emporia State and Missouri Southern Individual Elite Camps.

I have been in contact with coaches from all levels. My plans are to go play at the next level, not sure what college yet.

Reading and watching TV. I rarely have time to rest since I am involved in more than sports. So, when I can chill out, I surely do.

In 10 years, I see myself being in my second year of being a kindergarten teacher. Planning to open my own Bed and Breakfast. If possible coaching basketball at the high school level.

English is my favorite subject because we get to write different types of papers. In those I get to express my true self. I’m very involved in my school. I am in many clubs, I sing in the choir, I volunteer my time to go do activities at the elementary school and at other events. My GPA unweighted is 3.67, weighted is 4.05.

Maya Moore is my role model as a player. When I first started watching college basketball, she was one of the first players I was drawn to.  She’s such an amazing person on and off the court. As a player, I try to be as dominant as her on the court.

Ernesto’s, El Pueblito and Peters are the top three places to eat, in Parsons. It is hard for me to decide which is best, it all depends on what I am in the mood for.

I am a Senior Girl Scout and recently completed my Gold Award.