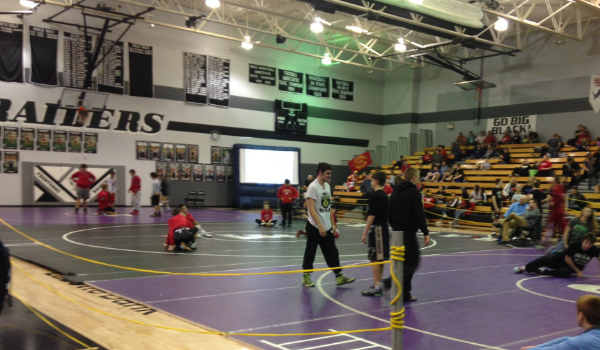 Washburn Rural captured the 16th Annual Cougar Invitational at Shawnee Mission Northwest with 421.5 points. Fort Osage (Mo.) was second with 391 points. Junction City was third at 348, followed by Blue Valley in fourth at 331.5.

Rural is third in 6A behind Derby and Garden City. Manhattan, the previous No. 3 team last week, is fourth, followed by Dodge City. Rural returned nine starters from last year’s 6A runner-up squad.

For Rural, Bishop Murray (7-0) won at 106 pounds, including a fall in 1 minute, 52 seconds in the championship against Fort Osage’s Dylan Reed. Murray is No. 1 ranked at 106 after a state title as a freshman.

At 195, WR’s Preston Williams (4-0) beat Junction City’s Terrance Adeleye by technical fall for Adeleye’s first loss this year. They are ranked 1-2 in 6A at 195 pounds.

Rural did not have Gavin Carter, the top-ranked wrestler at 182 pounds, in the meet.

At 285, a pair of dominant wrestlers met up in the championship semifinals. Rural’s David Huckstep fell to Blue Valley North’s Garret Aimutis, 6-3.

Both wrestlers have just one loss this year. Both Huckstep and Aimutis captured all their other wins by fall. In the championship, Aimutis defeated Fort Osage’s Stevie Gabb by fall in 5 minutes, 41 seconds in the final,

At 182, Olathe East’s Wyatt Mackley (6-3) earned the title with the 7-2 finals win versus Blue Valley’s Bartsch.

Great Bend continued a strong season with its second straight title. GB won the 66th Douglass Goodwill Invitational with 188 points, 20 ahead of Derby. Pratt was third at 142 and Newton fourth at 140.

Great Bend is up to sixth in 5A after ninth in the first two polls.

For GB, Drew Liles (7-1) won at 120 with a sudden victory in the championship against Newton’s Grant Treaster. This marked Treaster’s first loss of the season and dropped him to 8-1. Liles is ranked first, Treaster second.

Cade Lindsey (3-0) had a bye and three wins by fall, including in 3:20 for first place versus Newton’s Dante Harper. It marked Harper’s first loss of the year and dropped him to 9-1.

At 195 and 285, Bryce Westmoreland and Ronnie Washington each went 3-0. Westmoreland had a high-profile matchup with Douglass’ Zach Dressler in the final and won 3-1 in overtime.

Washington earned all three wins by fall after a first-round bye. He is third at 285.

At the Anderson County Invitational, Santa Fe Trail captured the 13-team tournament with 219.5. Frontenac was second with 188.5 points. Anderson County was third with 179.5 points, more than 100 points ahead of any other squad.

For SFT, Christian Rowe (11-1, third in 4A) won at 120 with a 6-4 championship match versus Anderson County’s Rylan Wright. The Chargers had plenty of success at the upper weights.

Caleb Jeanneret won by fall in 1:55 against Frontenac’s Storm Niegsch at 160. It marked Niegsch’s first loss this year, and Jeanneret moved to 9-2. Stephen Roberts was third in the same weight class after a 9-7 loss to Niegsch in the first round.

Frontenac had a second-place showing from Bennie Adarr (6-1) at 126. Dawson Lapping was second at 132 and moved to 4-1. Riley McDaniel was first at 138, is 5-0 this season and won by technical fall in the first place match. He is ranked second in 4A.

The Colby duals are one of the largest early season meets and takes place over three days. The tournament is split into several pods. At the high school, Colby took first place, followed by Eaglecrest (Colo.), Oakley, Liberal, Tonganoxie and Hinkley (Colo.).

At the Community Building, Hays High was the highest Kansas finisher with a third place showing in the six-team grouping. Phillipsburg took fourth, Hutchinson fifth and Goodland sixth.

Both had seven pins at 195, Booi in a collective time of 12 minutes, 49 seconds, and Schroeder in 21:36. Declan Ryan and Kory Finley delivered five pins for Colby, and 10 Colby wrestlers recorded at least three pins.

Colby was ranked seventh in 3-2-1A preseason but is now up to first.

Dodge City and Phillipsburg among those with undefeated wrestlers at Colby

Several other wrestlers at outstanding performances. Tonganoxie’s Greyson Sonntag was 7-0 at 106. At 113, Kyle Adams of Topeka Seaman was 7-0, along with Dodge City’s Damian Mendez, who completed at 106/113.

At 170, Oakley’s Morgan Rains and Jonah Clarke were both 7-0. Rains had six pins and a major decision. Clarke had five pins and two forfeits. At 182, Hays High’s Gavin Meyers was 7-0 with four pins.

Oakley’s Wyatt Glassman was 5-0 at 220 with five pins, and Colby’s Tucker Branum was 3-0 at the same weight with three pins, all in the first period. At 285, Zeth Mansell of Liberal was 6-0 with five pins and a major decision.

Minneapolis opened the season outside of the top-10 and then moved to fifth and is currently second. The Lions won their second meet in as many weeks when they captured their own Jeff Giles Invitational Tournament. The Lions had 128 points, while Plainville was second at 119.5. Eureka took third at 95.5. Eureka had been second in the 3-2-1A preseason before defending champion and preseason No. 1 Scott City moved to 4A.

For Minneapolis, Austin Roth (9-1) won at 120 pounds with a 4-0 championship victory against Blue Valley Southwest’s Luke Richardson. At 138, Tristan Hauck delivered a key 7-1 finals win versus Eureka’s Brennan Lowe, who is 11-1. Hauck moved to 10-0.

Tyson Villalpando (10-0) earned the title at 182 and gave Southeast of Saline’s Sterling Harp his first loss in 10 matches with an 8-2 decision.

For Plainville, Jordan Finnesy (8-1) defeated Minneapolis’ Layne Wilton, 18-8, in the title at 170. Wilton is 8-2. At 195, Plainville’s Ryan Junkermeier (7-2) defeated Southeast of Saline’s Colby Beer in sudden victory. Beer lost his first match and dropped to 11-1.

Eureka did have multiple champions. At 113, Kendall Beitz (12-0) had a bye and then won by major decision, technical fall and two wins by fall. At 152, Brent Escareno (13-0) earned a win by fall against Plainville’s Brandon Rohr in the finals match.

Eureka is now third, while Fredonia, Sabetha, Hoxie, Norton, Smith Center, Riley County and Phillipsburg round out the top-10.

At Clay Center, Marysville, the No. 1 team in 4A, captured the 13-team tournament with 153.5 points, well ahead of second place Holton with 102.5. Valley Center was third, followed by Andale and Hoxie. Multiple girls had strong showings in the boys’ tournament.

For Marysville, Isaac Novotny took second at 120 pounds, and Ethan Crownover and Jakob Snellings were third at 126 and 132, respectively. Jonny Crome (8-0 this season) was first at 138. He had a key 3-2 decision against Holton’s Taygen Fletcher in the fifth round before a 9-0 win against Clay Center’s Reed Knitter in the finals.

Noah Ackerman was second at 160, and took his first loss of the season with a fall in 3:53 to Hoxie three-time state champion Dayton Porsch. Ackerman is 7-1, and Porsch stands at 10-0. At 170, Storm Slupianek was first, moved to 8-0 and defeated Nickerson’s Jarin Gomez, 6-1 in the final. It marked Gomez’s first loss this winter.

After a third place finish at the season-opening Hoxie meet, Norton’s Dustin Vacura took first at the Duster Scramble in Holdrege, Neb. Last season, Vacura was fifth at this tournament. Norton took second with 189.5 points in the seven-team tournament. Broken Bow (Neb.) won with 263 points. Hill City was sixth with 98 points.

In addition to Rose and Moore, McPherson’s Mya Kretzer competed with the Bullpup boys’ varsity in Colby. She was a full-time varsity wrestler on the boys’ side last year and was 25-13.

The large girls’ tournament came in Great Bend, a competition that wrestled alongside a JV boys meet. The tournament had high numbers with all but the highest two weight classes with at least seven wrestlers. At 106 pounds, Holcomb’s Amelia Martinez won against Spring Hill’s Trinity Tauer in the championship by fall in 1:23.

At 113, McPherson’s Catalina Palacios bested her teammate Annah Turner-Simon in the final in a 1:48 fall.

At 120, Buhler’s Payton Warkentin continued her nice season with a win by fall against Spring Hill’s Natalia Moreno. She has won back-to-back tournaments.

At 145, Pratt’s Livia Swift won by fall over McPherson’s Morgan Jones in 52 seconds. Jones had won a title in her opening weekend.