v Faces in KS: Emilee Ebert - Sports in Kansas 
Warning: include(../includes/bodytag.php): failed to open stream: No such file or directory in /home/kansass/public_html/ks/news/index.php on line 36

Emilee Ebert of Frankfort is one of the top players in the state. 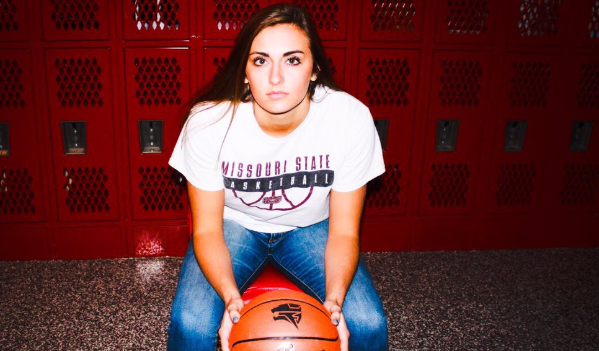 Emilee Ebert lives across the street from the Frankfort High School gymnasium, a place she’s been at virtually her whole life.

Her dad, Brian, is the current Frankfort girls’ coach and had previously led the Wildcat boys for 14 years. She started to attend practices at four years old.

Usually in the morning or evening, Emilee goes to the gym, often by herself. She works on ball handling and shooting with a shooting gun. Normally she stays 60 to 90 minutes and has at least 500 shots.

“I do enjoy gym time alone,” Ebert said. “I just crank my music up and get on the gun. It’s really relaxing, and gets your mind off things.”

Additionally, Ebert, at around eight years old, watched Kendra Wecker, from nearby Marysville.

Wecker earned high school All-American honors, collected Big 12 Player of the Year in 2005 at Kansas State and averaged 18.2 points in her career. She was a first round pick in the WNBA Draft and played several years professionally.

“I have worked for a really long time,” Emilee said. “D1 has always been my goal.”

Ebert modeled her game off Wecker and earned an early Division I offer from University of Nebraska-Omaha. Now a Frankfort senior and one of the state’s most accomplished all-around athletes, the 6-foot Ebert picked up offers from Missouri State, UMKC, Northern Colorado, Tennessee-Martin and Wyoming.

“I said I wanted to be just like her,” Ebert said. “I went to a couple of her camps, and she was just a lot of fun, and obviously a great all-around player, and so I just kind of wanted to make my style of game like hers. I am very versatile. I can do a lot of things. I am quick and tall, so that really helps a lot.”

Earlier this fall, Ebert signed with Missouri State, which has enjoyed great success with Kansas players, most notably Claflin great Jackie Stiles, who led the school to the Final Four and is currently assistant coach.

“Emilee Ebert is a long and athletic guard who gives us size on the perimeter,” Missouri State coach Kellie Harper said. “She is a versatile player who can handle the ball, score off the dribble and shoot the 3.”

Coach Ebert said Ohlde Elite “really” pushed Emilee and “understanding that she could get to the level that she wants to get at.”

“Due to my exposure by playing AAU basketball for Ohlde Elite the past three summers, I’ve received a lot of interest,” she said. “I was fortunate to have an awesome recruiting process, and I met so many great people.”

Entering this year, Ebert had started every game of her career and delivered more than 1,200 points and 500 rebounds. As a freshman, she had 18 points a game. Her sophomore season, Ebert averaged 17 points and 10 rebounds.

Ebert led Frankfort to a 19-5 record and the Wildcats’ first state tournament since 2010. As well, Ebert was a three-time first team all-state volleyball player and was second team all-state as a freshman.

She has placed multiple times at state track and has the school record for the long jump (17 feet, 5 inches) and 100 dash (12.6). Ebert had contemplated doing volleyball and basketball in college before she decided to focus on basketball. She plays multiple positions for Frankfort, including point guard. She has a 26-inch vertical and a 180-pound squat. Ebert is left-handed but ambidextrous.

“Every coach that recruited me talked a lot about my overall versatility as a player and my defense, so I do think those are big parts of my game,” Ebert said. “I also feel like I have good basketball knowledge and court sense.”

At state last March, Frankfort had a big lead against Twin Valley League rival Hanover in the first round of the Class 1A, Division I state tournament but fell 50-47. Hanover eventually went on to capture its second straight state title with big wins in the semifinals and finals. Frankfort had went 1-1 versus Hanover in the regular season.

“I feel like Hanover and us obviously were the two best,” coach Ebert said.

She recorded 17 points, six assists and five rebounds against Solomon. Versus Wabaunsee, she had 11 points, three steals, two rebounds and two assists.

Ebert and junior Keenan Brandt, who collected 10 points and seven rebounds a game last winter, were each named to the all-tournament team. As well, junior Alli Toomer is also a key player. Ebert said the team has “so much potential” this winter.

“I think we’re a fun group to watch,” she said. “We like to get up and down the floor. We do a great job of making plays for each other. I’d say we’re an unselfish team.”

Frankfort was ranked fifth in 1A in an extremely deep and talented classification that features Central Plains, Olpe, South Central, Rural Vista and three other TVL schools in the top-10: Hanover, Centralia and Axtell.

Class 1A went back to one classification after the previous split in Division I and II. More than 100 schools are in 1A.

“It’s definitely more difficult,” coach Ebert said. “I am not a believer in how they necessarily group 100 and some schools into one classification and some classifications only have 36, it seems ridiculously uneven.”

“But the caliber of play is definitely going to be more so greater than it was before,” he added. “People talked about two divisions in 1A as kind of watered down. To an extent yes, it was watered down, but we still had some very good teams at state.”

My dad was the boys’ basketball coach at Frankfort and I started attending his practices at 4 years old.

I would like to continue to improve on both sides of the ball. I understand that other teams will do what they can to stop me so I have to continually work on improving to stay ahead.

Yes we do! Our team has so much potential. We are striving to be TVL Tournament Champs, League Champs, win sub-state, advance to the state tourney in Dodge and win it all!

Every coach that recruited me talked a lot about my overall versatility as a player and my defense, so I do think those are big parts of my game. I also feel like I have good basketball knowledge and court sense.

It’s a great atmosphere at Frankfort High School! We always have a great crowd. Our community support is amazing!

I think we’re a fun group to watch. We like to get up and down the floor. We do a great job of making plays for each other. I’d say we’re an unselfish team.

I’m long but quick. I really love making that extra pass. My outside shooting could always improve.

It’s hard to choose one thing but I really do love setting my teammates up for great plays.

Outside Hitter in Volleyball. For a while I was considering playing both basketball and volleyball at the collegiate level.  In Track I do multiple events in sprints and Long Jump.

I love playing for head coach, Brian Ebert; yes that’s my dad! We are very like-minded so we’re often on the same page when it comes to preparing for games and game situations. It will be different not playing for him anymore and while I’m excited for the next chapter at Missouri State, I’ll miss him.

Many of us played for either AAU or MAYB club teams. We also met throughout the summer to work on skills and put time in the weight room.

Due to my exposure by playing AAU basketball for Ohlde Elite the past three summers, I’ve received a lot of interest. I was fortunate to have an awesome recruiting process and I met so many great people. I recently signed to play basketball for Head Coach, Kellie Harper at Missouri State.

Time in the gym, listening to music, spending time with friends and family, watching Netflix, and taking the occasional nap

I’m not much for timelines but I do know that I’d like to coach at the collegiate level and would love to start a family.