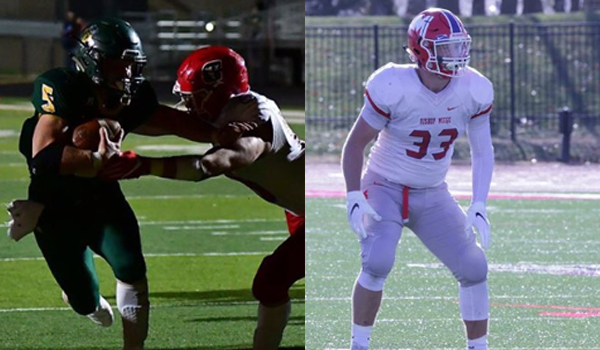 2018 Sports in Kansas All-Classes Offensive Player of the Year

He recorded 230 rushes for 2,608 yards and 43 rushing touchdowns. Theis also completed 36 of 72 passes for 985 yards with an 11/1 TD/INT ratio. Pratt finished 12-1 and lost in overtime on a two-point conversion to Sabetha in the championship game. He also did all this on a torn MCL, unknowingly, in the final two games of the season. He removed the brace in the second half against Sabetha because it was limiting him in the first half.

2018 Sports in Kansas All-Classes Defensive Player of the Year

The 6-2, 229-pound Downing helped Miege overcome two rare losses and roll through the 4A playoffs for its fifth straight state championship. Downing is Top 11 for all classes for the second straight season. He finished with 131 tackles with 13 TFLs and three sacks. He finished his career with 403 career tackles. He is also one of the top punters in the state of Knasas. In the five title years, Miege has allowed 12.8, 16.1, 11.0, 11.2 and 15.9 points per contest. The Stags have lost just four games in five years. Dylan’s older brother plays for Missouri football.