v Pedigo, Burke take home 2A Sports in Kansas POY honors - Sports in Kansas 
Warning: include(../includes/bodytag.php): failed to open stream: No such file or directory in /home/kansass/public_html/ks/news/index.php on line 36 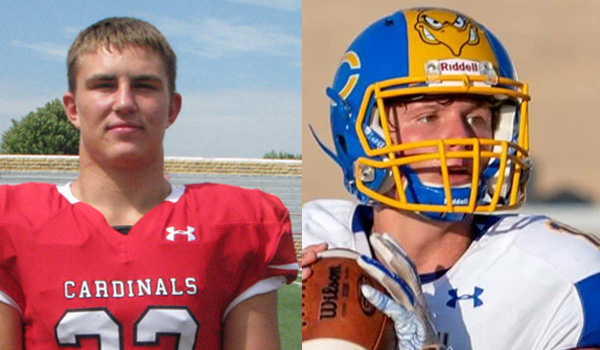 2018 Sports in Kansas 2A Offensive Player of the Year

Pedigo, one of the few players from any classification who was nominated for player of the year on both sides of the ball, had a huge season for the Cardinals. Hoisington finished 9-3 with a loss to 3A runner-up Pratt and two defeats to 2A undefeated titlist Phillipsburg, the second one in the semifinals.

Hoisington (9-3) tied the 2016 season for the best finish in school history. Pedigo delivered 222 carries for 2,101 yards and 29 scores. He missed the first contest versus Pratt because of injury and then went over 100 yards in every game.

Pedigo, a state wrestling champion at 182 pounds as a sophomore, had 10 catches for 135 yards and three scores. Pedigo set the school record for single season rushing yards for a program that is known for producing great backs. In the last eight seasons, Hoisington has had a back exceeded 1,100 yards each year. Pedigo, equally as good on defense,  also led the squad with 104 tackles and nine TFLs. He will be one of the top seniors in all classes of Kansas next season.

First Kansas Bank would like to congratulate Wyatt Pedigo of Hoisington on an outstanding junior season and the 2A Sports in Kansas Player of the Year. Proud to support the Hoisington Cardinals!

2018 Sports in Kansas 2A Defensive Player of the Year

Burke, a player of the year finalist on both sides of the ball was one of the most complete two-way players in the small schools of Kansas for 2018. He helped the Roadrunners to a 7-3 mark. He recorded 102 tackles with four tackles for loss, along with one interception, seven passes defended and four forced fumbles; the latter two marks tied or led for the team best.

As the team’s quarterback, Burke passed for 1,474 yards with a 23/8 TD/INT ratio, along with 1,077 rushing yards and 17 scores. In his career, he recorded 274 tackles, 12 interceptions and five forced fumbles. The son of longtime Chaparral coach Justin Burke, Jake was a full-time starter the last three years and started parts of his freshman year.

Burke has seen offers and interest from several Division II schools in the region.