v Theis, Rokey, Strahm pick up POY honors in 3A - Sports in Kansas 
Warning: include(../includes/bodytag.php): failed to open stream: No such file or directory in /home/kansass/public_html/ks/news/index.php on line 36

Theis, Rokey, Strahm pick up POY honors in 3A 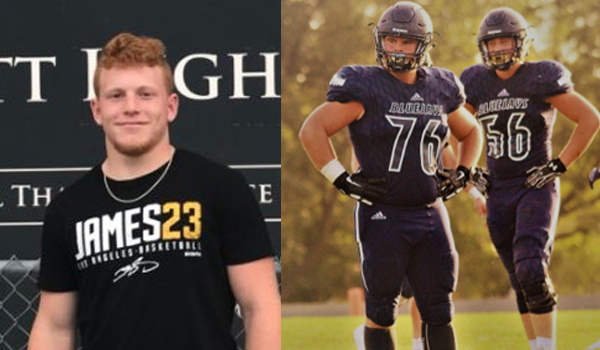 2018 Sports in Kansas 3A Offensive Player of the Year

He recorded 230 rushes for 2,608 yards and 43 rushing touchdowns. Theis also completed 36 of 72 passes for 985 yards with an 11/1 TD/INT ratio. Pratt finished 12-1 and lost in overtime on a two-point conversion to Sabetha in the championship game.

2018 Sports in Kansas 3A Defensive Player of the Year

Sabetha captured its second straight Class 3A state title. Last year, Sabetha went 13-1, and Strahm collected 3A Defensive Player of the Year honors as the Bluejays allowed just 9.7 points per contest, second-best in the classification. This year, Sabetha finished 13-0 and allowed just 10.3 points per contest against the No. 2 strength of schedule, according to Prep Power Index. Strahm and senior linebacker Cauy Rokey – also No. 1 ranked wrestlers- share the DPOY honor this fall.

The 6-2, 270-pound Strahm, a four-year starter on the line, had 43 tackles and three sacks and continued to clog holes up front. Rokey (6-2, 220) led Sabetha with 119 tackles, seven more than junior Gabe Garber. No other player had more than 71. In the last four years, Sabetha finished 42-8 and allowed just 12.4 points per contest. In the three previous falls before 2015, Sabetha was 17-15 with 19.4 points allowed a game. Rokey is also coming off a knee injury from wrestling last year and had one of the best years by any linebackers in the state. Strahm is also the defending 285-pound state wrestling champion in 3-2-1A.

Keim Trucking would like to congratulate the Sabetha Bluejays on their back-to-back 3A state titles. Also, congrats to Elliott Strahm, Cauy Rokey for taking home Sports in Kansas Player of the Year honors. We are proud of you and the Bluejays!

The entire Sabetha community is proud of our Bluejay Football Team and Elliott Strahm & Cauy Rokey on being named the 2018 3A Player of the Year from Sports in Kansas. It is an honor for Community National Bank to help sponsor such fine young men and gifted athletes! Congrats!