v Michalski, Derritt take 5A Sports in Kansas POY honors - Sports in Kansas 
Warning: include(../includes/bodytag.php): failed to open stream: No such file or directory in /home/kansass/public_html/ks/news/index.php on line 36 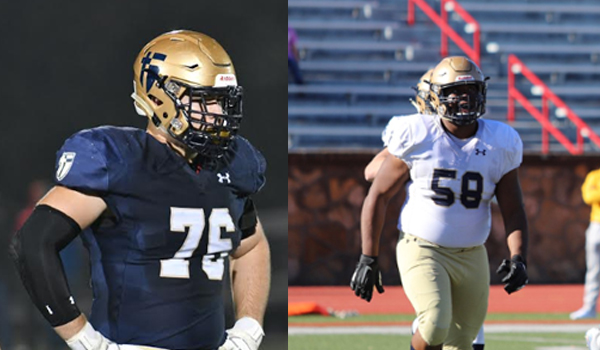 2018 Sports in Kansas 5A Offensive Player of the Year

Coach Randy Dreiling has won eight state titles, including seven at Hutchinson. In five years at Aquinas, he has two state runner-ups and a 12-0 mark this year, the first football state title for the Saints. Dreiling has said Michalski is the best offensive lineman he has ever coached.

The 6-foot-6, 280-pound Michalski, a rare non-skill player for Offensive Player of the Year, led a line that’s full of Division I recruits, including Matthew (DE) and Jaeden Roberts (OT). Aquinas has seven football players with Division I offers, so it was qutie the task for any all league or all state team to try to spread out the wealth among all their stars.

In 2017, he helped Cameron Jackson set the school record for rushing yards. This season, sophomore Tank Young easily surpassed the record with 214 carries for 2,075 yards and 26 rushing yards. Michalski is a two-time Top 11 all classes pick and has committed to Oklahoma State.

St. Thomas Aquinas High School would like to congratulate Joe and Javier on POY honors from Sports in Kansas. Home of the 2018 5A State Football Champion.

2018 Sports in Kansas 5A Defensive Player of the Year

The 6-3, 270-pound Derritt finished with 65 tackles and 11 for loss as Aquinas captured its first state championship in school history. He delivered eight tackles in the 49-28 state title win versus Wichita Northwest and a season-high nine in a signature 41-21 victory versus Bishop Miege on Oct. 12. Aquinas permitted just 14.5 points per contest in a 12-0 season, second-best in the classification. He was perhaps the most dominating interior defensive lineman in all classes of Kansas in 2018 and completely changed anytimes rushing attack, just ask Wichita Northwest.

Maize allowed one fewer point in a 10-2 squad. Last year, Aquinas went 11-2, was the 5A runner-up to Carroll and allowed 18.8 points per game. Derritt has committed to FCS powerhouse and multi-time national champion North Dakota State.

Wells Fargo Comercial Banking is a proud supporter of St. Thomas Aquinas Athletics. Congrats to Javier on the Sports in Kansas 5A Defensive Player of the Year.