v Faces in KS: Delaney Barnes - Sports in Kansas 
Warning: include(../includes/bodytag.php): failed to open stream: No such file or directory in /home/kansass/public_html/ks/news/index.php on line 36

Delaney Barnes of Baxter Springs has had two solid years and has two left. 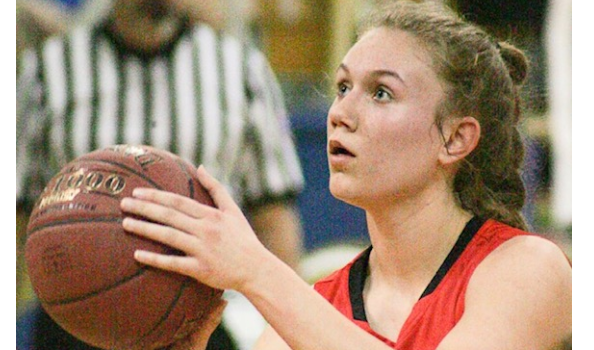 Baxter Springs, led by head coach Cory White, entered as an underdog in the Class 4A, Division II sub-state in Columbus last March.

However, Baxter Springs, led by standout Delaney Barnes, defeated Galena, 50-48, in overtime and beat Parsons, 41-32, to qualify for its first state tournament since 2006.

The Lions had lost at least once to Galena and Parsons in the regular season.

At state, Baxter Springs, with just six girls seeing playing time, had a close matchup versus traditional power Hugoton. The Eagles pulled away in the fourth quarter and the Lions lost, 51-34, for a 13-10 season.

At state, Barnes scored all of her team’s points in the first and fourth quarter and finished with 26 points, eight rebounds and four blocked shots.

Barnes was one of three unanimous CNC selections, along with Girard’s Sydnee Crain, who signed with Pittsburg State, and Columbus junior Karsyn Youngblood.

Baxter Springs finished fourth in the CNC league with nine league losses in a competitive conference where Galena, Columbus and Girard all tied for the league title. BS was the only one of those teams to make the state tournament.

“My team definitely has a chance to be very good this year,” Barnes said. “We have all five starters returning, and we’ve all worked hard to get better since last year.”

The 6-foot-1 Barnes, also an accomplished volleyball player and student, averaged 19 points and 10 rebounds a game as a sophomore. Her mother is Kelly St. Clair, who scored more than 2,500 career points for Baxter Springs and earned 1986 Miss Kansas Basketball honors. At that time, St. Clair’s point total was a state mark. St. Clair played college basketball at University of Missouri.

“I love the energy of volleyball,” Barnes said. “I am an outside hitter and play all the way around on both my school and club teams.”

When she is not playing sports, she is normally singing. She participates in Choir, Honor Choir and State Choir. Barnes carries a 4.0 GPA and calls biology and chemistry her favorite subjects.

Her goal is become a nurse practitioner. Barnes’ recruitment has just started. She has no offers yet, but has seen interest from Division I and Division II schools. Her goal is play volleyball or basketball in college. She also plays summer basketball for Wheat State Elite.

The power forward/center averaged 14 points and eight rebounds as a freshman.

Last season, she shot 70 percent on free throws with 37 steals and 32 blocked shots. For all classes, she ranked in the top-20 in scoring and top-10 in rebounding. This summer, she played on the Wheat State Elite traveling squad.

“I would say my versatility is key to me being a force,” Barnes said. “I am usually a threat down in the post, but I have the ability to step out and hit outside shots.”

Wheat State Elite is proud to support Kansas High School basketball. Best of luck to our very own Delaney Barnes this season.

My goals this season are to get better as a team and individually, and to win state!

My team definitely has a chance to be very good this year. We have all five starters returning, and we’ve all worked hard to get better since last year.

I would say my versatility is key to me being a force. I am usually a threat down in the post, but I have the ability to step out and hit outside shots.

The atmosphere in Baxter and at my school is like none other. We are one big family, we all help anyone that needs support.

My team has excellent team chemistry and we are very adamant about teamwork. People should come to our games to see how our teamwork converts into winning games.

My strengths are shooting, my post game, and passing. I definitely need to keep improving on ball handling and learning new post moves.

All other starters on my team are stand-out players, but one in particular is Abbey Underhill. She earned several honors last year, she’s a force to be reckoned with.

I love the competitiveness of basketball. Everyone is hustling and giving it their all the whole game.

I also play volleyball. I love the energy of volleyball. I am an outside hitter and play all the way around on both my school and club teams.

I love playing for Coach White. I have such a close bond with him, as does the rest of the team. He jokes around with us, but also is serious when he needs to be.

Individually, I played on my traveling team all summer, Wheat State Elite. All the tournaments I played in made me a better player. Playing tough competition is challenging, but it put me in situations where I had to fight through adversity. My school team and I went to several camps over the summer and have spent a tremendous amount of time in the gym.

Recruitment just started this year for me. A few Division 1 schools have shown interest in me already, as well as a few Division 2 schools. I am undecided on my future plans, I will hopefully go to college on a basketball or volleyball scholarship and study nursing.

In 10 years, I will hopefully be working as a nurse practitioner.

My favorite subjects in school are biology and chemistry. I am a very dedicated student, I have a 4.0 GPA and work hard to maintain my grades.

My role model is my grandpa. He is kind to everyone he meets and works harder than anyone I have ever met. I strive to be like him.

The best place to eat in Baxter Springs would have to be Red Ball. It’s locally owned hamburger joint with great food and a great atmosphere.

My mom, Kelly St. Clair, was Miss Kansas Basketball in 1986 and played at the University of Missouri on a basketball scholarship.