v Faces in KS: Halie Jones - Sports in Kansas 
Warning: include(../includes/bodytag.php): failed to open stream: No such file or directory in /home/kansass/public_html/ks/news/index.php on line 36

Halie Jones is looking for a huge year for Maize. (photo: Kari Heimerman) 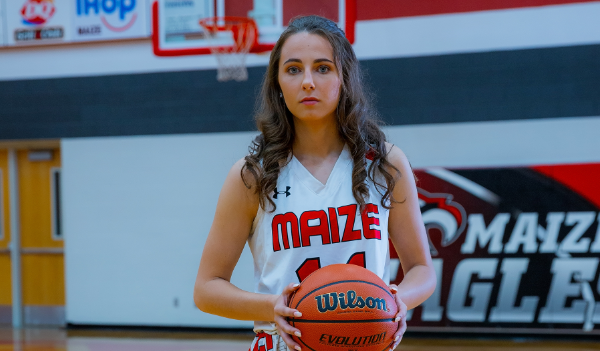 Jones, the second-oldest of four children, lives in Conway Springs, and transferred to Maize at the tail end of her freshman year for a better basketball opportunity.

Her parents, Craig and Jennifer, often go in separate directions to watch Halie and Cody. The parents also commute into Wichita for work, a change that started with the birth of Jones’ younger sister, Sadie, currently nine years old.

When she was young, Sadie had severe health complications, and doctors couldn’t find the solution.

The Jones family went to Kansas City, and doctors discovered Sadie had too many pulmonary arteries.

“This was not expected,” Jones said.

Doctors told the Jones’ family that Sadie needed surgery or was going to get lung cancer. She had open lung and heart surgery at six months old. Surgery lasted eight hours, and surgeons removed half a lung.

“She really wasn’t supposed to live through it,” Halie said.

Sadie’s surgery was one of the first in the country and doctors came in from Texas.

“Now more kids are having her issues,” Jones said. “Her surgery, it’s helping other kids out. That’s like the benefit, the positive side of it. They finally know what this stuff is.”

After the surgery, Jennifer went into the medical field. She currently works at the ER at well-known Wesley Medical Center.

“Gave my mom inspiration to go after what she always wanted to be,” Jones said.

“It like changed my views on family, and I realized that you can lose anyone at any time,” Jones said. “Me and family, we are so close compared to my friends at school, their families. Me and my family are really close, we have been through a lot together.”

Jones first met Handy many years ago when she played with a Next Level Eclipse team, a squad she has been on the last six seasons with coach Jeff Henry.

The squad had practices at Maize, and Jones ran into Handy.

“Ever since sixth grade, he has been trying to get me to go to Maize,” Jones said.

Even when she was younger, Jones has always been a strong defensive player.

The 5-foot-10 Jones was second team all-state as a sophomore and Sports In Kansas 5A first team all-state last winter. Jones also earned offers from NCAA Division II Newman and Emporia State. She averaged a team-high 11.2 points a game.

“I was always told I wasn’t quick enough, I wasn’t fast enough, so I really focused on that when I was little,” Jones said. “All I did was defense. I always wanted to steal the ball, and then it just comes to me easy.”

Maize went 17-8 and took fourth in Class 5A last winter after a seven-point loss to eventual champion St. Thomas Aquinas in the final four. Two years ago, the Eagles lost to Aquinas in the 5A state title.

Maize, which has never won a crown, also finished Class 6A state runner-up to Wichita South in 2014 and 2015. Those are the only three title game appearances in school history. Maize was third in ’12 and fourth in ’13.

Maize returns senior Alexis Cauthon, along with juniors Cassie Onwugbufor and Emily Laham and sophomore Sydney Holmes. On Twitter, Nicholson has posted that he believes Holmes will be a breakout player this year.

Cauthon has committed to play basketball at NAIA Evangel (Mo.). She averaged 10 points a game and broke the Maize school record for single season 3-pointers.

“To win state,” Jones said of the team’s goals. “We’ve come so close these past couple years, and I think this year might be it.”

Handy has coached multiple Division I players, including his daughter Daley Handy (Wyoming) and Keiryn Swenson (Arkansas). Handy saw some playing time with Wyoming, and then eventually transferred to Emporia State starting this winter.

Coach Handy heavily focuses on toughness. He has the players take basketball articles home to read. Before games, players meet in his classroom and write out the plays.

They will watch motivational and mental toughness videos. Jones said the work gets her “mentally prepared.” One of Jones’ favorites is from the end of the Rocky movie. At times, Maize will have videos on just one aspect of the game, such as rebounding or defense.

“His work ethic,” Jones said. “He helped me as a player build my work ethic. Our practices, we go so hard, and if you don’t, then you don’t want to experience that side of Handy. He definitely teaches us to just go hard every second, and it shows in the game. We really work on defense, which is what everyone talks about for Maize girls basketball is our defense.”

Nicholson is a Wichita Northwest graduate and started at point guard all four years at Fort Hays.

He earned MIAA Freshman of the Year and Honorable Mention All-American honors before he played in Romania.

Once he came back to Wichita, he started to work with girls’ basketball players and has great early success. Nicholson, with the Twitter handle @CN3Training, has worked with all the key players at Maize and many other top girls in the Wichita area.

Jones has focused on all aspects with Nicholson, including ball handling, shooting, different moves off screens and finishing better in 1-on-1 situations. In a 2017 Adidas Gauntlet National Championship tournament in Georgia, Jones hit a game-winning shot in traffic off a spin move she had worked on with Nicholson.

“I can consider Craig my older brother,” Jones said. “He knows probably more than my parents do about me. Craig is someone I go to for anything, life lessons.

“He is always there like preaching like, ‘Everyone makes mistakes, but you’ve got to learn from them, and you’ve always just got to grind, keep your mind right,’” she added. “And anyone can achieve their goals as long as they have motivation. He really helped me with my confidence, too.”

Lord won 69 percent of his games at Pitt State, including two Elite Eight appearances. He has significantly recruited the Wichita area in the past, including three Wichita players on the ‘18-19 roster.

Two years ago, former Maize player Taylor Holmes was a PSU freshman reserve. Lord knew of Jones from Holmes’ recruitment. In July, Lord started to heavily recruit Jones when he got to UTRGV. She went on a visit, and Lord offered.

How did you get involved in basketball

In fourth grade I wanted to play in this league with all my friends and I ended up liking it a lot and continued with it.

To win state. We’ve come so close these past couple years and I think this year might be it.

I really do think so. Majority of our players play year round and put in the work to get better so I think we are going places this year.

I really take pride on my defense which is the best part of my game. I love to drive the ball but I’m also a shooter.

We always put on a show. Our team is full of personality and we have fun when we play. We don’t disappoint, and we are a very aggressive team that loves to come out and put pressure on our opponents.

My strengths are I’m always trying to do the best I can to help my team and I win, I’m a good shooter, my defense, and I’m an overall aggressive player. My weaknesses are that I get too aggressive at times which result in fouls.

The friends I have made over the years and the traveling I’ve done with AAU.

It’s an honor to play for coach Handy. I can honestly say he’s on of the best if not the best high school girls coach in the state. He always puts us first whether it’s buying us chocolate on Valentine’s Day or getting us donuts/McDonald’s after morning practices. He’s always making sacrifices for us and puts in the time to get us where we are as a program. He’s helped shaped me to into the player I am today. I am forever grateful for that.

We do after-school workouts everyday which we do weight lifting and conditioning for about 2 hours. We individually workout with training such as CN3 (Craig Nicholson) about 2 times a week. And coach opens up the gym for us about twice a week, and we also go to 5-on-5 runs weekly that CN3 hosts at Northwest. And of course fall league.

I have signed to play at The University of Texas Rio Grande Valley. A D1 school in the WAC conference. I’m planning to major in forensics science.

I like to either chill with my teammates at someone’s house or watch horror movies.

I see myself living in Wichita and being a homicide detective. Maybe married, I don’t know.

I love math and science. I’m the student that always talks too much in class but I try to keep the energy going if the class is super boring. My GPA is 3.6.

My role models are my parents. Because as a family we’ve been through so much and even at their lowest they kept composure and never let my siblings and I see them worried. My dad especially because he has taught me what it is like to workout hard and get respect from others for it.

An actual meal is Texas Roadhouse. But if you want something sweet, Krispy Kreme.