v What impressed us after the 2018 state title games? - Sports in Kansas 
Warning: include(../includes/bodytag.php): failed to open stream: No such file or directory in /home/kansass/public_html/ks/news/index.php on line 36

What impressed us after the 2018 state title games?

Central Plains allowed only 34 points all season on the way to a 13-0 record. (Photo: Everett Royer) 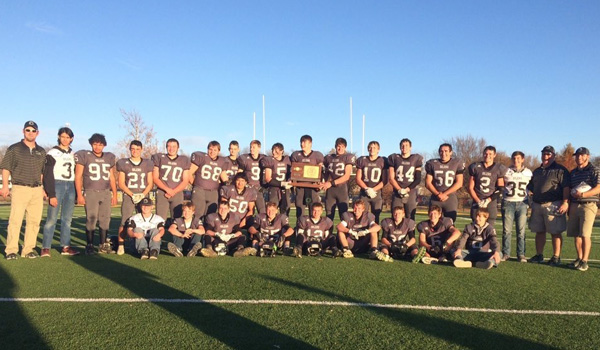 Derby won their fourth state title in six seasons under Brandon Clark with a 24-16 win over BV North. The Derby defense limited Graham Mertz to just 18 completions and 233 yards as he came into the game averaging close to 400 yards passing per game. Derby got it done on the ground as Tre Washington had 242 yards on 27 carries. and three touchdowns while Hunter Igo added 187 yards on 35 carries. Derby would only complete five passes in the game but it was the rushing attack that proved to be the difference in landing the Panthers another state title and fifth in school history (1994, 2013, 2015, 2016, 2018).

St. Thomas Aquinas has over 100 state titles in all other sports but had zero in football until Saturday and that changed as the Saints captured their first ever state football title with a 49-28 win over Wichita Northwest. It was 21-0 at the half and 35-0 at one point in the third quarter, what looked like it could be a blow out. Northwest would then score 21 unanswered and make it a ballgame, before the Saints ultimately took control in the fourth quarter. It was a big day for sophomore running back Tank Young as he had 34 carries for 329 yards in the contest to put him over 2,000 on the year despite missing a few games. Young had four touchdowns in the game on runs of two yards, 47 yards, 67 yards and 62 yards. Randy Dreiling captured his first state title at Aquinas in his fifth year with the program, two years he also took runner-up (2014, 2017). Dreiling has eight state championships as a head coach at Hutchinson (7) and STA (1). All of those titles have came since 2004.

Miege captured their fifth consecutive state title on Saturday in Topeka at Hummer Sports Park in dominating fashion in a 69-31 win over Goddard for the 4A crown. It was the first 4A state title for Miege under Jon Holmes as the last four came in 4A-I, even though its just renamed. Sam Pedrotti saved his best for last as he completed 20 of 27 passes for 358 yards with five touchdowns in the contest. Hudson Bentley had seven catches for 167 yards while Phillipe Wesley added four catches for 116 yards. Jaylen Scruggs also added 57 yards. Brison Cobbins added 132 yards on the ground in the game along with 52 from Pedrotti. The Stags rolled up more than 576 yards of offense in the game. Goddard didn’t just bow down though as they had 271 yards of offense in the game and had Kyler Semrad throw for 151 yards with two touchdowns in the game. Defensively, the Stags were paced by senior all-state linebacker Dylan Downing who had 12 tackles, he also added a rushing score late in the third quarter. Miege has nine state football titles as a school and six since 2009, five of those are under Holmes, all since 2014.

The most thrilling game of the day came in 3A as the Sabetha Bluejays repeated as state champion as they defeated Pratt, 43-42 in overtime. Sure, there has been a lot of photos thrown around of both Pratt possibly fumbling in OT and Sabetha also fumbling and not making the two point conversion in OT, but those would have had to be calls nearly impossible to make in real-time. Sabetha led 12-0 after the first quarter and would have an 18-0 lead until 1:05 in the second quarter when Pratt finally got on the board to make it 18-7 at the half. Pratt turned into the Travis Theis show in the second half as they exploded for 28 points over the third and fourth quarter. It would go down to the wire as Pratt would score to take the lead with 1:12 remaining on a nine-yard Theis run, answered by a 11 yards pass from Gabe Garber to Ryan Stapleton with 31 seconds in the game before going to overtime. Pratt would score on the first possession of overtime on a one-yard Theis run and convert the PAT. Sabetha would use all four downs and convert on a 4th and 6 pass to Stapleton pass again from Garber for the touchdown. It then came down to go for the win as Garber would score on a play at the pylon on the two-point conversion to give Garrett Michael and the Bluejays their second consecutive state title. Joseph Gruber had 156 yards rushing in the game and Garber added 95 for Sabetha. Pratt was led by Theis who had 245 yards rushing on 35 carries along with 13 yards passing, he would have six combined touchdowns in the game. What an outstanding game in Hutchinson. Both teams also showed a lot of class and met at midfield after the game to show respect to each other, class act programs led by Michael of Sabetha and Pratt head coach Jamie Cruce. We knew how tough 3A was going to be with all the defending champions from all the classes and Saturday’s game represented that.

It was all Phillipsburg Panthers in the 2A state championship in Salina as they cruised to a 27-0 victory over Riley County for their second state title under J.B. Covington in four years as they won it all in 2015. Phillipsburg scored in the first quarter on a 24 yards pass from Trey Sides to Ty Sides. Trey has been a four-year starter at quarterback and was the starter on the last title as a freshman in 2015. He struck again in the second quarter on a 26-yard pass to Nolan Moon to make it 14-0 at intermission. Record breaking field goal kicker Jonathan Hunnacutt hit two long field goals in the third and fourth quarter quarters of 45 and 41 to make 20-0 before the final score came from Tanner Ragsdale on a two yard run with 5:43 remaining to make the score 27-0. Phillipsburg defense limited Riley County to just 54 yards passing and 35 yards rushing in the game. Phillipsburg was led by Trey Sides who passed for 150 yards on 10 completions with 103 of those going to sophomore brother Ty. Phillipsburg was one of two MCL teams (Smith Center, 1A) who didn’t allow a point on Saturday. Phillipsburg was also the only team to beat Smith Center this season.

The Redmen of Smith Center blasted Olpe, 59-0 on Saturday in Hays, on the way to a 12-1 record on the season. Their only loss coming to the team we just highlighted above in 2A champion Phillipsburg in league play. Smith Center led 41-0 at the half and 59-0 at the end of three. Darren Sasse picked up back to back titles for the Redmen, who now have 10 as a school in football. Eight of those came under legendary Roger Barta, including the 79-game state record winning streak. Ethan Peterson led the Redmen in rushing with 161 yards on 12 carries and Colby Benoit added 118 on 11 carries. Smith Center only attempted three passes in the game, all three were completions.

Central Plains, led by head coach Chris Steiner, remained perfect as they dominated Solomon 52-6 in the 8M-I title game on Saturday afternoon in Newton. The Oilers only allowed 34 points all season in their 13-0 record. Alex Hickel had 74 yards rushing in the contest while Jerred Bieberle added 52. Myles Menges would pass for 125 yards in the game, 66 of those going to Grand Heldstab and 47 going to Lawson Oeser. Bieberle had an interception for TD return in the game while Hickel had two rushing scores of 52 and 11 yards. Menges also had a TD run and two passing touchdowns, one each to Oeser and Heldstab. Central Plains now has two state football titles as a school (2014, 2018). However, the Claflin dynasty had five state titles in the 1990s before consolidation with Quivira Heights who also had a title in 1983. A lot of these same kids were part of the undefeated 2018 2A boys state basketball team champion.

Hanover, led by Matt Heuer, won their third consecutive 8M-II title on Saturday in Newton with a 58-50 over Osborne. Osborne would make a surge in the second half after trailing 32-12 at the intermission. Daiken Stallbaumer had 114 yards rushing on the ground and passed for another 200 through the air. His favorite target was Thomas Atkins who had eight receptions for 143 yards in the game. Pete Peters also added 49 yards receiving in the game. Atkins also scored on a kickoff return and two receiving touchdowns in the game. Carter Bruna, one of the best linebackers in 8-man football, also added two scores on the ground along with 110 rushing yards. Osborne was passed by Darnell Holloway who had 110 yards passing and 159 yards rushing. His younger brother, Darrien, added 138 yards on the ground. Hanover now has six state titles as a football program and has won 38 games in a row.