v Labette Bank Athlete of the Month: Gage Friess - Sports in Kansas 
Warning: include(../includes/bodytag.php): failed to open stream: No such file or directory in /home/kansass/public_html/ks/news/index.php on line 36

Gage Friess had a breakout year for the Vikings. (photo: Sean Frye) 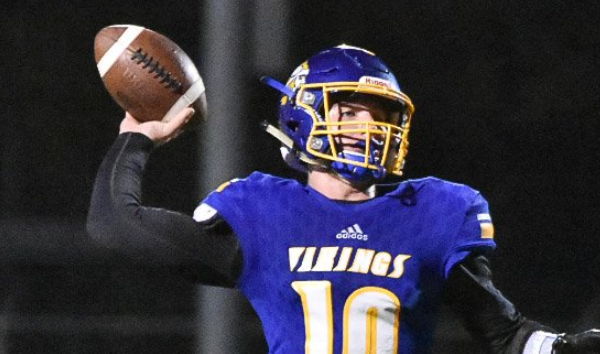 The Labette Bank Athlete of the Month from Southeast Kansas for their play over the last month of the 2018 season is Parsons High School senior Gage Friess.

Freiss, a quarterback, helped guide the Vikings to their first quarterfinal appearance in 42 years this season after Parsons finished 8-3 in 2018 following a loss to Sabetha this past Friday. It was also the first playoff win in 42 years in week nine against Girard and they followed that up with a second win against Prairie View in week 10. Friess had a breakout senior campaign in which he passed for 2,040 yards and 27 touchdowns to just eight interceptions. He also rushed for 801 yards and six touchdowns for the Vikings.

It was quite the season for the Vikings, under first year head coach Kurt Friess, who is also Gage's father. Parsons won eight games this year and only had five combined wins from 2012-to-2017. It was the first winning season since 2011.

Labette Bank would like to congratulate Gage and the Parsons High School football team on an outstanding 2018 season.