v Faces in KS: Logan Talley - Sports in Kansas 
Warning: include(../includes/bodytag.php): failed to open stream: No such file or directory in /home/kansass/public_html/ks/news/index.php on line 36 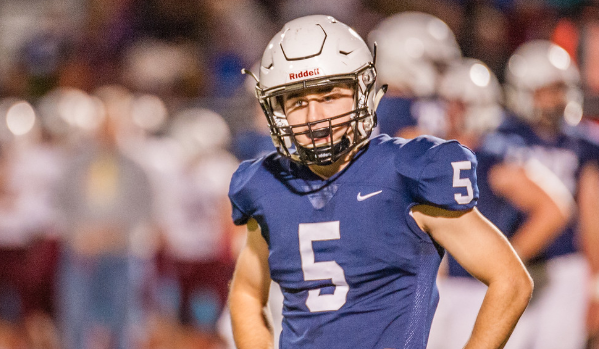 Talley has twice been an All Non-Senior pick at Sports in Kansas over the last two football seasons and helped the Jaguars to a 5A state title as a sophomore in 2016. Now a senior Talley is the all-time leading receiver in Mill Valley Jaguar history, passing former Gatorade Player of the Year, Christian Jegen, back in week nine.

Talley had 647 yards on 52 receptions for nine touchdowns as a sophomore in 2016. He followed that up with a 1,254-yard junior season with 11 touchdowns in which he earned first team 5A honors and first team Sports in Kansas Non-Senior honors. Now a senior, he has 59 receptions for 734 yards with three scores. Talley has totaled a school record 2,635 yards receiving with 22 touchdowns.

It’s not just Talley that has shined either for Joel Applebee’s Mill Valley program. Senior quarterback Jordan Preston has had a breakout year since transferring over from Free State replacing the outstanding 2018 alum Brody Flaming. Tyler Green leads the squad in rushing this season as a junior with nearly 700 yards and nine touchdowns. Cameron Young is also back from injury and when healthy can be one of the top playmakers on this squad.  Defensively, MV is led by Chase Shryrock (103 tackles), Sage Siperda (81 tackles), William Christian Roth (7.5 sacks) and Ben Hanson (4 interceptions). The Jaguars (7-3) get it done with a total team effort.

This Friday Mill Valley gets a common opponent, the Saints of St. Thomas Aquinas, arguably the top team in all classifications of Kansas.. Aquinas knocked off Mill Valley earlier this year (24-13) and also twice last year, one of those being in the sub-state championship. However it has been quite the rivalry as the Jaguars knocked off Aquinas in each of their two state championship runs in the playoffs of 2015 and 2016. Mill Valley and Talley will have their hands full on Friday but Talley will be ready. We caught up with the outstanding senior record breaker below in the latest Q&A edition of Faces in Kansas.

I’ve been playing football since I was little and have stuck with it ever since.

To win a state championship and have a fun senior year.

I believe we do. We have a confident group with multiple returning starters on both offense and defense who have bought into the program.

I usually catch whatever is thrown my way and my ability to make guys miss. I also work really well in space and can line up at any skill position.

Our stands are full and our town really loves watching us play football. Our school shows out to all home and away games as well.

Our games are fun to watch because we play in such a challenging league that ends up creating good games. We also have so many players on our team that are capable of making exciting plays.

Tyler Green is our running back and he is a work horse. He is always going 120% and the whole team looks up to him. He’s only a junior but proved to the whole team how impactful he is. Matty Wittenaur is a senior wide receiver who makes amazing plays for us and can give other teams secondaries problems. Trevor Wieschhaus is our tight end who does a great job being a hybrid between blocking and catching passes, he is someone who also always goes 120%. Other key players on the defensive side are Sage Sieperda, Ben Hanson, Chase Shryock, Christian Roth and Eli Midyett.

Playing and working with all of my friends.

I used to play basketball and I was a guard.

Playing for coach Applebee has really help me grow as a person. Every day for the past four years he has challenged me in the weight room, on the field and in the classroom. He has taught me many lessons in football that will translate to my life later on. He’s a great guy who only wants the best for his players and would do anything for them.

We are all really good friends with each other so we would hang out together, forming closer bonds. But typically every day in the summer the wide-receivers would throw with Jordan (our qb) to get better chemistry. We also went to multiple camps and 7v7 tournaments.

I have some interest in playing at the next level but as of now I plan on going to Iowa State to study software engineering.

I enjoy hanging with my friends and dog, playing video games and going skiing/kayaking.

I’m not certain, but hopefully I’m doing well for myself and I’m happy with where I’m at.

My favorite subjects in school are Math and English. I’m a pretty good student when I want to be.

My dad is my role model. Without him, I don’t know where I would be. He’s a big reason to why I am the way I am and he is always there for me. Growing up, he never forced me to do anything and let me choose to play what sports I wanted. No matter what I choose to do he supports me regardless and that is something that I cherish. He is a very humble even though he doesn’t have to be. I could go on forever but this a few reasons why I look up to him so much.

I used to play quarterback before I was a wide receiver.