v Parsons has went from 1-8 to the state quarterfinals - Sports in Kansas 
Warning: include(../includes/bodytag.php): failed to open stream: No such file or directory in /home/kansass/public_html/ks/news/index.php on line 36

Parsons has went from 1-8 to the state quarterfinals

Parsons Joel Schibi is having a big year on both sides of the ball. (photo: Sean Frye, Parsons Sun) 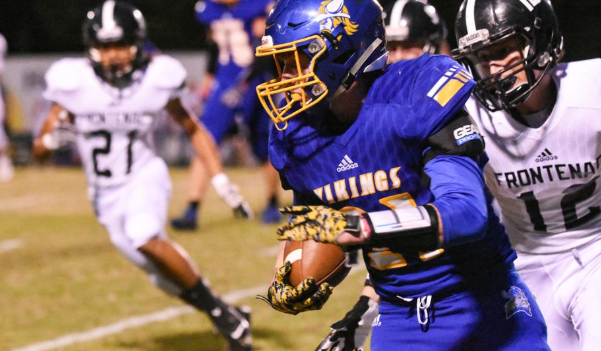 One of the most surprising teams in the state this year has been the Parsons Vikings football team. The Vikings are 8-2 this season, one year after going 1-8 and not being competitive in nearly every football game in 2017.

Parsons hadn’t had a playoff win since 1976 and that all changed two weeks ago on Thursday night against Girard in a 6-0 win and then last Friday in regional play they defeated Prairie View (38-23) on the road to get their second playoff victory of the year. Their two playoff wins are the first in 42 years. They also advance to the quarterfinals for the first time since 1976. Parsons and playoffs don't seem to go together in the Sports in Kansas era, let alone quarterfinals. That has changed and that's why they are one of the most talked about teams in Southeast Kansas. Sure they aren't the best team in the area but this turnaround has been one of the best in the entire state for 2018 and there's no taking that away from Parsons.

“It’s awesome. It’s been a great little run we’ve been on. We got a crew of great players and coaches. Our kids are focused. Our speed really showed on the turf this past week against Prairie View.” Friess said.

So how did all this happen from going from nobody to somebody? Well a lot of things came together for Friess to become the head coach. Parsons also has athletes right now that are competing in all sports at a high level in state, whether thats baseball, basketball or track and field. They've all bought in and they've all been unselfish.

As we’ve stated before Friess is no stranger to Parsons, Kansas. He’s a former player for the Vikings in the 1980s that went on to play at Pittsburg State. He would later become an elementary principal in his hometown, where he still serves today in Parsons. This season Friess added some more to his already busy schedule as he became a first-year head coach for the high school football program.

"My staff kept telling me this was going to come together and they were confident in saying that. They told me we were going to win playoff games this year. I don't know if I would have believed that in August but they all did and its happened." Friess said.

Coaching staff is one thing that came together and the other was already there and its speed. It’s no secret that Parsons has used their speed to put themselves as round of eight team in 3A. Last years 4x100 state runner-up team in 4A is all on this year’s Vikings team. That includes Dariq Williams, Davonte Yates, Gage Friess and Daquan Johnson.

Friess, the son of head coach Kurt Friess, has passed for over 1,700 yards and rushed for nearly 700 more this year as a senior since coming back from injury last season. Johnson is one of the best junior multiple sport athletes in Kansas and can play every skill position on the field. He also has seven interceptions on defense to rank among the state’s leaders. Williams, who likely miss the rest of the year, has an eye for the football and had 66 tackles over the first seven games. Williams and Johnson, two of the best 4A-II basketball players in the state last season for the 4th place Vikings, are also two of the best return guys in the state. Senior Patch Loadholtz has had a breakout year at receiver in which he has over 700 yards. Yates, one of the best triple jumpers in Kansas, also has over 300 yards this season. Nolan Proehl and Anthony Pousher have also been big in the receiving game in giving Friess more options.

“I felt like coming into the year we have the talent to be a playoff team. Maybe its a bit surprising but we have the talent to be here. Sometimes it is hard calling plays for these guys because there are so many skill guys to go to spread it out. We’ve always had a lot of talent here in Parsons over the years. The toughness has seemed to be lacking from past years and that’s the difference with this year’s group because they have it.” first year offensive coordinator Jeff Schibi said.

Defensively the Vikings are led by Joel Schibi who has had a breakout year with over 110 stops from his linebacker position as a senior and of course the seven interceptions by Johnson. Interesting enough, Schibi’s father, Vincent, played on the last Parsons team to win a playoff game before losing in the state semifinals to Kapaun in 1976. Rodney Welch has had over 60 tackles, 18 of those for loss. Croix Hogan is also having a solid year. Loadholtz, Williams, and Yates are also stepping up big week after week. Ricky Ellis and Luke Wolgamott, last year’s Sports in Kansas 4A-II Baseball Player of the Year, have also played key parts but are out with injuries.

Last week Parsons may have had its best game of the year and clicked offfensively. It also helped show their speed in the first time playing on field turf. This week the task will be much more challenging than that of Prairie View. This week will be the biggest challenge yet for the Parsons team that has seen a complete turnaround. Regardless of the outcome, this year’s group will go down in history as the team to end the playoff loss drought and the turnaround. Parsons gets defending state champion Sabetha in the 3A quarterfinals on Friday at home.

“They have several players who played in the state championship game last year. They jump off the page on film. They have no weaknesses on their defense. Our hands are definitely full. They are a tough bunch. Their quarterback Garber always seems to be going forward. They have a lot of experience and have been here before.” Friess said.

Kickoff is set for 6 p.m. this Friday in Parsons at Marvel Park.