v Faces in KS: Noah Stanton - Sports in Kansas 
Warning: include(../includes/bodytag.php): failed to open stream: No such file or directory in /home/kansass/public_html/ks/news/index.php on line 36

Noah Stanton is a big force on the Maize defense with 12 sacks. Photo: Rich Norrod 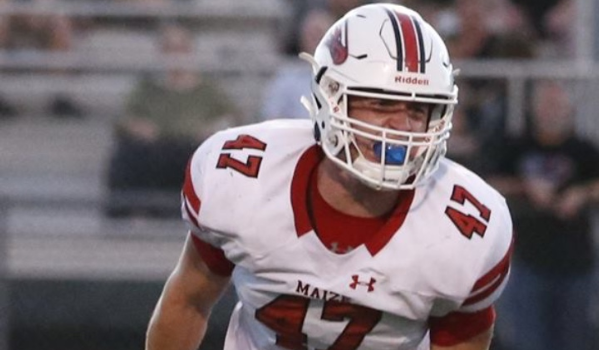 Noah Stanton is having a breakout year for the 5A Maize Eagles who are off to an outstanding season at 7-1.

While the offense is known with the likes of quarterback Caleb Grill and running back Caden Cox, defensively Stanton has been the star with 12 sacks to rank among the leaders in Kansas. His 12 sacks are ranked #1 in 11-man football in all classes of Kansas for 2018, according to our Sports in Kansas stat leaderboards. Only one player has more and that is an 8-man player.

Stanton isn’t an unknown player and many expected a big year but he’s having an all-state caliber season in 5A. He had six sacks one year ago and earned AVTCL-I second team all-league honors. The 6-foot-1, 220-pound defensive end and outside backer has great strength with a 415 squat, 265 clean and 270-bench, while running a 4.9 40-yard dash. Stanton uses his hands, speed and pass rush ability to become a force on Friday nights.

Stanton has been part of a defense that had four consecutive shutouts to start the year and only allowed nine points after six weeks. It’s one of the best units in 5A.

Maize, led by head coach Gary Guzman, has a real shot at being a contender this season in 5A. They were one of the more underrated teams in Kansas last year at 9-2 and this year their only loss was to 6A Derby (35-21) last week and they likely played Derby the best anyone else has played the state power this year.

The Eagles open up the 5A football playoff bracket this Friday against Liberal (1-7). With a win they would get the winner of Maize South (5-3) or Andover (3-5) in the second round. We caught up with the senior defensive end below in the latest Q&A edition of Faces in Kansas.

Kevin Shields State Farm would like to congratulate Noah and the Maize Eagles on an outstanding season.  Please call me at 316-686-5968 for Insurance advice. See our ad in the top right corner.

My dad played football at the collegiate level and grew up watching my Uncles play.

To win a state title and have the best team record in school history.

We One-Hundred Percent have the ability to make a deep run and win a state-title.

The amount of support we get from classmates, parents and the community is unreal! The atmosphere is nothing less than electric.

Because you’ll see a great defense get after it, and a arsenal of offensive weapons ball out.

Caleb Grill is having an amazing season and Caden Cox is having a great junior season. I would name every player on our defense if I could. Every week new players have standout games because we work as a unit focused on achieving our goal of a state title.

Being a part of a team and competing every day.

I play basketball, and play some forward and wing. I’m pretty good at hustling and running plays well.

Coach Guzman is a great head coach who expects us to perform at the highest level possible on every rep or play we get. Our Defensive Coordinator JJ Milanovich, my position Coach James Hammett, and our secondary Coach Rocky Helm all do a great job of preparing the defense week in and week out with great game plans for us to execute.

We lifted hard and heavy and ran our butts off. We also just made an effort to hang out together and look out for one another.

I’m seeing interest from D-2 Schools in the MIAA, GAC, and the Northern Sun Conference.

My favorite things to do other than football are probably hanging out with my friends/teammates, reading, and listening to music.

I see myself being a College Football coach or being a Strength and Conditioning Coach.

My Favorite Subject in School is either World History or Psychology and Sociology.  I have a 2.7 GPA.

My Football Role Model is definitely Tamba Hali. I've tried hard to implement parts of his game into my own.

But when it comes to off the field role models there are many mentors I admire greatly, but the primary influencer and role model in my life is my Dad. No one has taught me more about leadership, integrity and work ethic than he has.

Nancy’s A-Maize-N Sandwiches is great. There's no place in the Wichita area you can get a better breakfast.

That I’m a huge history nut. I love learning about everything from Ancient Civilizations to the Politics of the First World War.