v Faces in KS: Jacob Backus - Sports in Kansas 
Warning: include(../includes/bodytag.php): failed to open stream: No such file or directory in /home/kansass/public_html/ks/news/index.php on line 36

Jacob Backus is having a huge year for Marysville (Photo: Julie Perry) 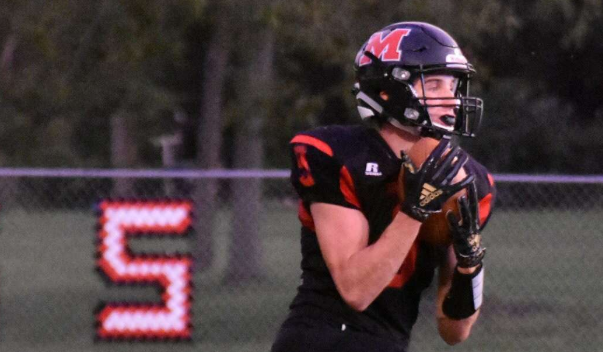 Marysville High School had quite the football season one year ago as they took runner-up in 3A with a 12-2 record. They were a team that kind of came by surpirse to a lot of experts statewide. While many star players like Jack Blumer and Gabe Pieschl graduated, one that may have flown a little under the radar across the state was Jacob Backus who had a breakout junior year one season ago and has continued that success as a senior for the Bulldogs in 2018.

Backus, who stands 6-foot-0 and weighs 160-pounds, had 79 receptions for 919 yards last season along with 653 total return yards. He was a first team Non-Senior all-state selection from Sports in Kansas in 2017 as a return man. Now a senior, he has continued right where he left of with 44 receptions for 600 receiving yards and seven touchdowns. Backus also has 370 return yards and two punt returns for touchdown through the first eight weeks of the season. He has 835 all purpose yards this season. Defensively he’s made 25 stops with two interceptions.

It’s not just Backus having a big year either as quarterback Brandon Schroedl, a first-year starter as a junior, has thrown for 1,260 yards and 14 touchdowns completing 84 of 123 passes in 2018. Atreyau Hornbeak has also had a nice year with 526 yards rushing on 94 carries and seven touchdowns. The offense is one of the most balanced offenses in the state averaging 159.3 passing per game and 174.4 rushing per contest.  Defensively Garron Champoux, a junior middle linebacker, leads the Bulldogs with 101 stops, while Storm Slupianek, another junior, has 64 stops.

Marysville (6-2), led by head coach Dustin Heuer, opens up the 2018 3A playoffs on Friday as they take on Santa Fe Trail (5-3) at home. They claimed district runner-up position as defending state champion Sabetha has claimed the district championship. We caught up with Backus below in the latest Q&A edition of Faces in Kansas.

This feature is presented by Crist & Pieschl, Rehabilitation P.A., proudly supporting the Marysville Bulldogs in 2018-2019!

I got involved with football my 5th grade year. For me it was one of those things that my brothers did it so I wanted to. I stopped playing football after my 8th grade year and didn’t play until my junior year.

Can you guys make a run again?

I think we do have a shot to make a run this year. We lost a lot of good players last year but our team is full of competitors and winners.

What makes you a force as a player?

I think my quickness and being able to make catches that most people can’t. Makes me such a force as a player. I’m electric my teammates call me the ankle taker. I can make plays that shouldn’t be made.

The atmosphere to play in Marysville is amazing there is a lot of history in our town and the fans have always been there even when we had the long losing streak.

Other key players this year?

My favorite thing about football is being able to compete every week against different competition.

Coach Heuer is a great coach he pushes us every week in practice.

What did you all do this off-season to get better?

Our team got into the weight room a lot this summer we had 7on7 and we pushed each other every day.

What do you like to do in spare time?

Where do you see yourself in 10-years?

I see myself being a Physical Therapist.

My favorite subject in school is math.

My role model is Scott Brown