v Faces in KS: Jack Roberts - Sports in Kansas 
Warning: include(../includes/bodytag.php): failed to open stream: No such file or directory in /home/kansass/public_html/ks/news/index.php on line 36 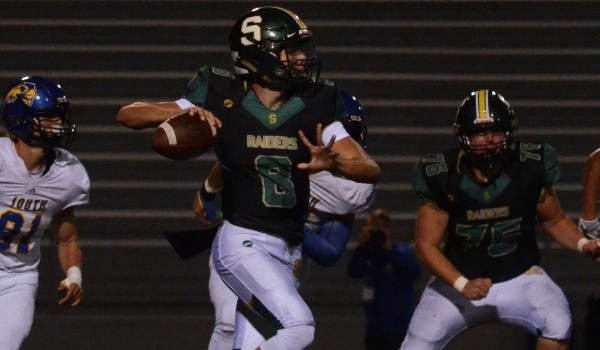 Shawnee Mission South, led by head coach Brett Oberzan, is enjoying one of the best seasons they’ve had in a long time, a lot of that credit can go to senior quarterback Jack Roberts.

Roberts has been a breakout player this year in the Sunflower League for the SMS Raiders who enter the 2018 6A playoffs with a 6-2 record. Roberts is quite the athlete at the quarterback position with great size at 6-foot-3 and 180-pounds. He has a 4.61 40-yard dash time and a vertical leap of 37.5 inches. Roberts was a starter on the defense two years ago as a sophomore and moved to quarterback near the end of the season, which seemed to be the perfect move for the Raiders.

Roberts has passed for 852 yards with 13 touchdowns while rushing for 1,021 more yards with 10 toucheowns. He has been one of the top dual-threat quarterbacks this season in 6A. South is also with at least six wins for the first time since 1989. Roberts is coming off a game in which they won over SM Northwest where he had 282 rushing yards (4 TD) and passed for another 103 yards (1 TD).

SM South has been quite the turnaround under Oberzan and Roberts. South had just four combined wins the last three seasons. It's not been just Roberts either as we've seen breakout years from Will Huggins, Sam Macklin and Hunter Carpenter, all big time weapons for Roberts.

The Raiders get a 6A playoff matchup on Friday as the four seed and take on Olathe Northwest, the thirteen seed at 1-7. They are looking for their first playoff win since 1990. While everyone does make the playoffs now and it was certainly harder to make them back in the one team out per district days, a lot of credit needs to be given to the turnaround of this program. South, a former powerhouse in the 1970s and 1980s, has two state titles as a school coming in 1973 and 1975.

We caught up with the outstanding senior quarterback below.

Chet Kuplen, Founder/CEO of Sports in Kansas, on Roberts

"Every year we have breakout players in Kansas. Going into the year I can't say I knew a lot of Jack. He has turned my head this year and now I know all about him. That's due to his hardwork and his coach for putting this program on the map. I love when we see a turnaround, especially to where this program was two years ago. Jack is one of the most athletic players in the state. He could really be a safety at the next level with his athleticim if he wanted to. He's very powerful for his size as well. Kid is a game changer and one of the best dual-threat quarterbacks in Kansas. I also look for a big year for him in javelin. He evidently has quite the arm if he was throwing 175 foot last year as a junior. I know South had quite a few starters back on both sides of the ball, but theyve definitely surprised a lot of people. It will get much tougher for them in the playoffs but man what a turnaround."

I grew up watching and playing football with my dad and my older brother Ian. I started tackle football in the 1st grade where my dad was my coach in fccjc. We switched over to the Blue valley league of champions in 4th grade and had multiple championship seasons.

To bring Shawnee Mission South to its first winning season in 20+ years which we have already accomplished. Other than that it is to go as far as we can in the playoffs and make it to state.

Yes we have an insane amount of talent on both sides of the ball and have what it takes to get there.

I am a dual threat QB so i can run the ball all over a defense and pass it as well. I will take whatever a defense is giving me. I am extremely good at reading defenses and running the triple option. It forces teams to respect the run game with me a lot more and then we pass it over the top.

The atmosphere around South is completely changed to what it has been in the past. We have a new Stadium which is one of the nicest in the state. The fans pack the Stadium and we put on a show. The whole community comes together to support us.

I have the ability to make something out of nothing and extend plays farther than they should go. I am extremely quick when it comes to juking. Our team is full of Athletes who make plays.

Will huggins is my TE/ WR, He is 6’6 and extremely athletic. A big threat down near the endzone on Fades. He is a huge target that i am able to find a lot.

Sam Macklin is my main WR who runs a 4.43 40 yard dash. Also 6A state long jump champion. We use his quickness and elusiveness a lot on our offense.

Hunter Carpenter is a RB/ Slot. Extremely good route runner and has great hands. Runs the ball like a train. Also runs  4.45 40. Our Speed on Offense gives us an advantage over a lot of teams.

Playing with all of my best friends who have all put the work in to get where we are and for all that hard work to pay off on Friday Nights.

I do Track and Field and am one of the best Javelin throwers in the state with  best throw of 175.10”

My coach has taught me so many life lessons and I am so thankful for everything that he has done for us. We had a rough season 2 years ago where almost all of our Senior class quit on us and our coach led us through tough times in a 0-8 season. He told us that we would be the class to change South football forever if we put the work in and now we are 6-2 our senior year all due to him.

Nobody missed our daily workouts. If you want to play you had to be at the workouts in the morning and work on getting better everyday. We trained a lot harder than we ever have before and it paid off.

I have interests from some D1 colleges including Wyoming and Drake University and have a lot of D2 interest as well from schools in the MIAA. Could play QB or WR in college or even Safety and have gotten looks at all positions.

Favorite thing to do besides football by far is Hunting. During the end of the Season a lot of the time i spend my only day off on Sunday duck hunting. After the season ends i spend my weekends at Morning Star Farm, my family farm outside of Great Bend Kansas, in the Stand looking for a deer with my Bow.

In 10 years i see myself as an assistant coach for a college football team working my way up.

Favorite subject in school is Business. I have a 3.0 gpa and got a 25 on the ACT

My role Model is my dad. He was a captain of the Rugby Team at KU and has helped me a lot becoming the athlete i am today. Was my head coach for football from the 2nd to 8th grade.

Easy, Johnny's Tavern. My dad is one of the owners, we go there for our breakfast before games and to eat pizzas after the games we win.

I am crazy athletic when it comes to jumping. I have a 37.5 inch vertical and a 60 inch vertical box jump. I can do a standing backflip on the ground and can dunk a basketball a lot of different ways. Some of my other hobbies besides hunting are Snowboarding, Surfing, Wakeboarding, Etc.