v Faces in KS: Zach Goodeyon - Sports in Kansas 
Warning: include(../includes/bodytag.php): failed to open stream: No such file or directory in /home/kansass/public_html/ks/news/index.php on line 36

Zach Goodeyon is having a breakout year for STA. (photo: Susan Goodwyn) 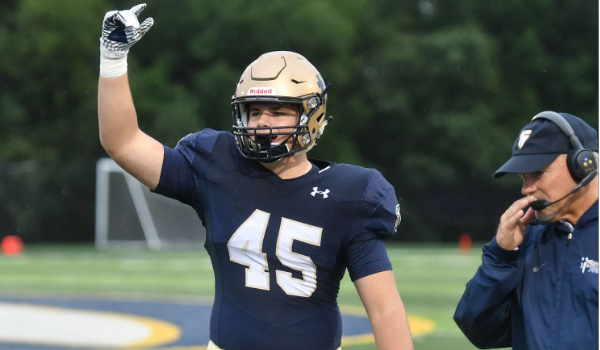 Every year in the Eastern Kansas League or in bigger leagues across Kansas we see players come out of nowhere to have big senior seasons. Sure, it’s likely because of depth and numbers at larger schools that happen to be powerhouses and waiting your turn. It's never surprising when a Blue Valley, Aquinas, or Miege player can go from junior varsity one year to an all-state player the next year. This year one of those players is St. Thomas Aquinas first year starting senior linebacker/defensive end Zach Goodeyon.

Goodeyon has had an all 5A caliber season so far for the undefeated Saints (7-0). The 6-foot-3, 240-pounder, is a tackle machine in 2018 as he leads the Saints with 71 total tackles (39 solo, 32 assists) in seven weeks. Goodeyon is one of the seven new starters on the Aquinas defense that is one of the best in Kansas. He also has two sacks, six TFLs, four QB hurries and a pass break up. He helps anchor a defense with North Dakota State commit Javier Derritt who has 26 QB hurries this season and 10 TFLs. Bo Meisenheimer and Max Seibolt have also combined for 115 stops for the Saints. Jayden Russell is also one of the top defensive back recruits in Kansas on the Saints defense. Matthew Roberts has also battled injuries but is one of the rising 2020 recruits in Kansas.

Goodeyon is also starting to see college looks for his size and athleticism. He gets it done in the weight room with a squat of 410 pounds and a clean of 265. He has an offer from Missouri Western and Benedictine. He could figure into an inside backer or defensive end with his size. Goodeyon had just 20 tackles one year ago for the 11-2 Saints who took runner-up, so it’s safe to say he’s had a monster senior season that maybe wasn’t expected. Goodeyon is also a good student with a 3.2 GPA and his favorite subject is Science.

Offensively the Saints are led by Tank Young, a sophomore running back who has over 1,400 yards, through seven games. Joe Michalksi is perhaps the top lineman in Kansas and is headed to Oklahoma State. Cameron Jackson, last year’s star running back, has also been big out of the backfield and established himself as a lead blocker for the flexbone attack. Tate Raboin has also had a breakout year as a first-year starter. Offensive lineman Jaedon Roberts also has power five offers and is over 6’5” 330 pounds as a sophomore. By the time the season is over Aquinas could be a team with 7-to-8 players with FBS offers.

Aquinas is 7-0 in the arguably the best league in the state facing the likes of Blue Valley and four-time defending 4A-I champ Bishop Miege. Aquinas is arguably the top-team in Kansas, at least according to our Sports in Kansas/Rack Performance Rankings panel they are. The Saints have over 100 state titles as a school in all other sports, they have zero in football. Everyone seems to think this may be the year that Aquinas, under legendary Kansas coach Randy Dreiling, can get that first stat title. However, it won’t be easy. Mill Valley lies on the 5A East, a team that has given Aquinas fits in the playoffs in recent time and won two state titles in 2015 and 2016. With that being said, Aquinas beat them earlier this year in maybe their most competitive match-up of 2018 and will still be the 5A East favorite. The West bracket is much more loaded but it’s just now playoff time for the Saints who open up the 5A bracket with Highland Park on Friday.

We caught up with the senior breakout linebacker/defensive end below in the latest Q&A edition of Faces in Kansas.

"It's awesome to see a player you didn't know anything about coming into the year be a breakout player in 5A. Talking to some people around the program this kid has significantly improved from a few years ago to where he is now. He's turned himself into a recruit at the next level. He's athletic as well with a vertical around 30 and can run for his size. Not the fastest guy but he's versatile being able to play inside backer and defensive end. This is one of the most loaded teams we've seen in quite some time and he may not be the FBS recruit like the others, but he's been the breakout player on the defense. Nice surprise for sure and I really expect to see the Saints in the title game."

I began playing tackle football in 2nd grade and have not stopped.  My dad really got me involved with football.  He was one of my coaches from 2nd – 8th grade

We want to bring STA their first State Championship!!!

YES we do!  We are currently 7 – 0 and EKL League Champions

My ability to fly around the field and be in on most every play.  I am also a leader for the defense out of the field.

Aquinas has an outstanding atmosphere.  We always have big crowds, but this year has been the best by far since I have been at STA.  I am honored to play for Aquinas.

My team makes our games a must see every week.  Both sides of the ball are outstanding.

Every person in the starting line ups makes a great contribution.

Being surrounded by my “brothers”.

I throw the javelin which is a great way to keep me active and in shape during the offseason.

What is it like to play for your Randy Dreiling?

It’s amazing.  He is an outstanding coach.  He is extremely knowledgeable about football and has years of success.

We had daily weights and conditioning and went to two team camps.

I hope to play at the next level at either LB or DE.

I hope to be in veterinarian medicine.

All of my grandfathers

I wouldn’t be anywhere close to the person I have become without my family, team and friends.