v Fowler, Oswego seem to be right fit - Sports in Kansas 
Warning: include(../includes/bodytag.php): failed to open stream: No such file or directory in /home/kansass/public_html/ks/news/index.php on line 36 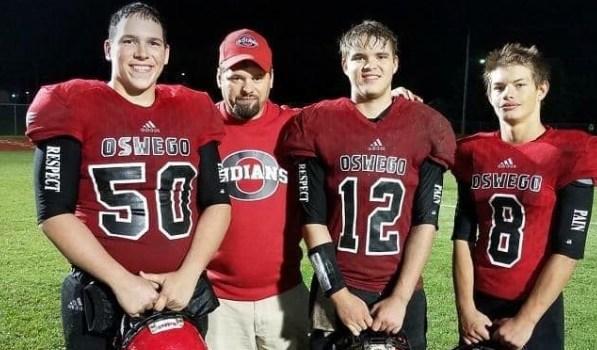 Oswego, located in Labette County and the county seat in the Southeastern part of the state with a population of just over 1,800, is just 1-3 all-time in the Kansas state playoffs in modern era since 1969. It’s safe to say they are a school that hasn’t tasted a lot of success in football.

In comes first year head coach Matt Fowler for 2018 and the Indians are 6-2 one year after going 1-8 in 2017. In fact, the 2015, 2016, and 2017 squads combined for just five wins, one less than the Indians have already in 2018.  All of the sudden there is some excitement around the town and program that hasn’t seen a playoff win since 2009, their only playoff win in school history that came in the first round over Uniontown in 2-1A. Fowler and the move to 8-man football this year has seemed to be the perfect fit for the Indian program.

Fowler, a Lockwood, Missouri native, came to Oswego this summer from Spearville out in Western Kansas. The first four seasons at Spearville, he was 4-23. He would go on to turn them into a state power with a 62-32 record in nine seasons and a team that was ranked #1 in the nation by MaxPreps for 8-man football in 2015. That Spearville team won an 8M-I Kansas title with 39 kids out on the team. While the success at Oswego can’t be compared yet to that of a Spearville, Fowler has the Indians rolling in just a few months of being in town.

“It’s been a blessing to be a part of it and seeing the kids, school and the community get behind it. It’s like they’ve wanted it for a long time and everyone really wanted to taste it. Everyone has really rallied around the team.” Fowler said.

We knew Fowler would eventually have an impact but we weren’t so sure it would happen so fast. Fowler has also moved some kids around on the field to succeed. Jace Wilson was a receiver and return man last year and didn’t have much experience out of the backfield. This year he’s played like one of the top running backs in 8-man football with the move as he has gained 1,239 yards and 23 touchdowns. Wilson, a junior, has 1,837 all-purpose yards to rank near the top among all 8-man football players. Defensively, he has 83 tackles and two interceptions. Paidon Kite and Isaac Elliott have also been huge on the defense with 198 combined tackles between the two. Elliott has also added 10 rushing touchdowns and five passing touchdowns.

“It’s been a total team effort and its been fun watching them grow so far. The kids have bought into their roles and have done a great job. They may have been a little hesitant at first in what we were trying to do with them but once they saw a little success they have kept buying in.” Fowler said.

“They are a ground and ball control offense. Both teams will value the time of possession. They have a lot of size and know how to use it. The Fielder kid who is their quarterback is very elusive and good with the ball. He’s giving everyone a big problem this year.” Fowler said.

It could also be a bright future for the Indians with just three seniors on the team.

Labette Bank, a proud supporter of Sports in Kansas and local athletics, would like to congratulate the Oswego Indians for making the 2018 8M-I playoffs and best of luck this postseason.