v Faces in KS: Drake Steinbrock - Sports in Kansas 
Warning: include(../includes/bodytag.php): failed to open stream: No such file or directory in /home/kansass/public_html/ks/news/index.php on line 36

Drake Steinbrock is having a huge year in 8M-I for the Eagles. (photo: Clyde Republican) 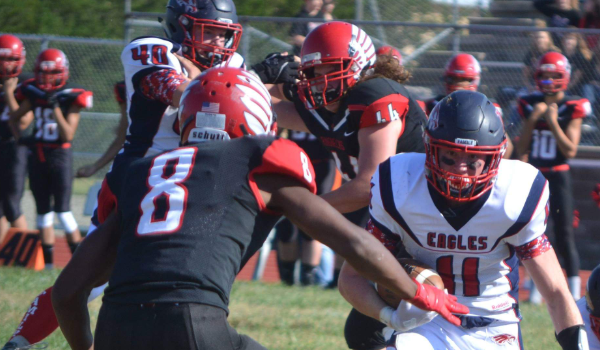 Clifton-Clyde senior running back and linebacker Drake Steinbrock has been involved with football his entire life from being the son of Eagle head coach, Russ Steinbrock.

He’s also enjoying another breakout year on both sides of the football as the Eagles are 7-0 to start the 2018 campaign. Steinbrock, who is looking like one of the top two-way 8-man players in the state this season, is a hard-nosed player that earned all-league honors on both sides of the football one year ago. He also gets it done in the weight room as a two-time state powerlifting champion. He has a bench of 300, squat of 425 and a clean of 305 pounds at 5-foot-10 and 180-pounds.

“I have been involved with football my whole life as a coach’s son. Every Friday night I was the ball boy and have always looked forward to this year as a senior. It’s awesome to be playing under my dad and playing with all of my friends I’ve been playing with since flag football.” Steinbrock said.

Steinbrock has 86 carries for 852 rushing yards this season with 15 touchdowns to lead the squad. Defensively, he shines ever more so as he has 78 tackles, an interception and seven sacks to rank among the states leaders in 8-man. He’s also thrown two touchdown passes in two passing attempts.

It’s not just Steinbrock that has had a big year offensively either as Aiden Rudolph has 535 rushing yards and 10 touchdowns and Christian Siefert has 538 rushing yards and 14 scores. It’s no secret that the Eagles like to run as they’ve only attempted 39 passes all season.

The Eagles were primed to have a big year with returning five starters off each side of the football for a team that went 8-2 last season. They aren't a team that is going to pass the eye test on size but they are one of the fastest teams in the 8M-I ranks. Seifert, Rudolph, Brant Douglas, Nathan Ohlde, Tanner Thompson, and Douglas Koch have also had huge years for Clifton-Clyde. Clifton-Clyde has scored at least 48 points in every single game this season. Their most impressive victory coming over traditional 8-man power Victoria, 54-30, in week five.

While the Eagles look to go 8-0 this Friday against Lincoln, they are looking for a deep-deep run in this year’s 8M-I playoffs. We caught up with the outstanding senior below in the latest Q&A edition of Faces in Kansas.

I have always been part of football my whole life, being the coach's son.  Every Friday night I was the ball boy.  And have always looked forward to this year as a senior.

I am very aggressive, and bring hype to the team.

Big games bring the both these towns together.

We have a very explosive offense and hit hard.

I have competed at weight competitions and have won state power lifting 2 years in a row.

What is it like to play for your coach and father?

I love having Dad as a coach, I wouldn't trade it for anything.  Sometimes he's a little harder on me, but I know its for the better.

We have had one of the best off-seasons that I've ever been apart of.  We have had the most of any group to have in the weight room and the most competing in power-lifting completions.

Not sure on where, but plan on pursuing electrical technology.

Being around the Clifton-Clyde area.

My parents, they are both hard working individuals and people I have always looked up to.

Dad and I are very close and love hunting together.

We aren't a very big team but we are very fast and have a lot of heart.