v Faces in KS: Kail Dubbert - Sports in Kansas 
Warning: include(../includes/bodytag.php): failed to open stream: No such file or directory in /home/kansass/public_html/ks/news/index.php on line 36 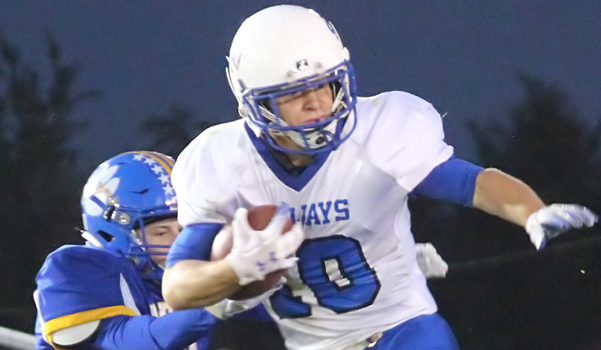 No, Dubbert isn’t a high-level college football recruit and likely won’t play football in college as he plans on being an engineering student at Kansas State University next fall, but that doesn’t take away from the senior being a breakout player this season.

Sometimes media outlets can get carried away in all of the recruiting, size, offers and fail to appreciate the high school football player, not the projected player. There are multiple all-state players every single season across Kansas that may never play another down after high school and it doesn’t mean they aren’t  good football players. Dubbert is one of those players in the state that has stepped up big for his 8-man program this year.

The 5-foot-8, 170-pound, senior, has racked up 91 tackles this season to rank among the leaders of 8-man football in total tackles in 2018. He has also shined at running back with 620 yards and 11 touchdowns. He also has 97 yards receiving and two touchdowns.

He also gets it done in the weight room for a 170-pound kid. He has a bench of 225 and clean of 225. Last season he was a non-senior honorable mention pick from Sports in Kansas as well as an 8M-II honorable mention pick from the Wichita Eagle and Topeka Capital Journal. He had 101 tackles and four sacks. He has 261 career tackles entering week seven of his senior year.

He’s not the first Dubbert with success at St. Johns-Tipton either. It’s a rare occasion when we feature siblings, a pair of brothers, but in this case, he is the third Dubbert brother we have profiled on Faces in Kansas since the fall of 2014. Oldest brother, Trey Dubbert, who went on to play basketball at Sterling, was a multiple sport all-state athlete at St. Johns-Tipton graduating in 2015. Davis Dubbert, now a track and field athlete at Wichita State, was one of the states top multiple sport athletes just two years ago. Kail, the third oldest, may not be the last Dubbert we feature either as sophomore sister, Lauryn, was a first team Sports in Kansas 1A-II all-state selection in basketball last March as a freshman. It’s safe to say the family has meant a lot to the sports programs at St. Johns-Tipton over the last several seasons.

Kail also gets it done in the classroom and is model student athlete. HE has a 3.99 GPA and was named a Kansas Honor Scholar this year. His favorite subject is math and he spends the majority of his spare time studying as he is currently taking four college courses.

For now, Dubbert is worried about the football season and perhaps a little bit of a run in 8M-II. The Blujays, led by head coach Keith Kresin, are currently 4-2 on the year after finishing 5-4 in 2017. They take on Lakeside-Downs this Friday at home.

This feature is presented by First National Bank of Beloit, wishing the St. Johns-Tipton Blujays best of luck this season.

Also thanks to Hubbard Feeds in Beloit for their yearly support of Sports in Kansas and Beloit area athletics.

We have been dealing with many major injuries this year. We play a lot of underclassmen so we are on the more inexperienced side. In the 2 games that we have lost this year they were by wide margins but we had a couple miscues and injuries that changed the pace of the game. I do believe, however, that our team has a chance of making a run by the time playoffs come around with the players that we have.

What makes me such a force as a player is my ability to take over a game. If we need to get 3 yards on a fourth down I am going to get it. If we need a stop on defense, it does not matter where the play is on the field I will be there. I have been playing football for such a long time that I feel like I don't have to think about what I do it is more of a reaction to what is going on.

Our sports teams have had a lot of tradition roll through our school so going out and playing every Friday you can feel it from the fans and the community.

Our team is typically always out sized. We play a fast pace with lots of athletes on the field that can make the games exciting to watch.

Ben Towner, the only other senior, has been a great leader for our offensive line this year and has done a great job blocking up front.

Brayden Perez has filled in at tailback this year for an injured Anthony Henke and has been a steady improvement throughout the year. Him and I have become a powerful force in our backfield.

Eric Koenigsman has been a key player on our offensive and defensive line and is our second leading tackler on the team.

My favorite thing about football is being able to strap up every Friday night with your friends and going out and hitting people. There really isn't anything like playing football with your childhood friends in my opinion. Football is an emotional sport and you can feel a connection with your teammates every time you take the field.

I play basketball, track, golf, and baseball along with football. I am an extremely competitive person and anytime I have the opportunity to compete I will take it. Football is my favorite sport but basketball would have to be a close second.

Coach Kresin is a very loud and vocal coach. He knows how to get his teams fired up and ready to play every week. He pushes us as a team to be the best that we can be every day in practice.

Everyone hit the weight room pretty hard this summer. We have a lot of motivated kids that know what it takes to be a good team and we do a good job of pushing each other to our limits.

Right now I haven't had any interest from colleges and I plan on going to K-State and majoring in engineering.

When I'm not playing sports I like hanging out with friends and working on the family farm.

In 10 years I would like to live in a small town where I can raise a family, use my engineering degree, and work on the family farm.

My favorite subject in school is math. A lot of my time at night is spent on homework because I am taking 4 college classes but I know the importance of it, and I was named a Kansas Honor Scholar this year. I have a 3.99 GPA.

My role model is my dad. He has taught me hard work and supported me in all of my activities growing up. I value his never quit attitude and that reflects onto me.

My favorite place to eat is Plum Creek in downtown Beloit.

I can solve a Rubik's cube in less than 30 seconds.