v Faces in KS: Garret Dalinghaus - Sports in Kansas 
Warning: include(../includes/bodytag.php): failed to open stream: No such file or directory in /home/kansass/public_html/ks/news/index.php on line 36

Garret Dalinghaus is off to a huge year for 6-0 Frankfort. (Emmy Floersch Sedlacek) 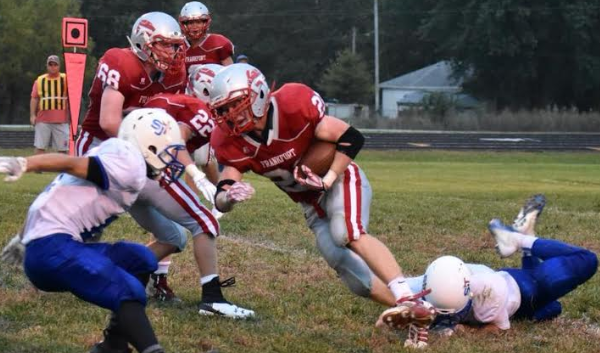 Frankfort junior running back and linebacker Garret Dalinghaus is having a breakout year for the Wildcats.

The 6-foot-0, 165-pound, two-way standout, has 729 yards rushing on just 79 attempts this season with 16 touchdowns. He also has 65 tackles and two interceptions from his linebacker spot. More importantly, the Wildcats are 6-0 for the first time since 1996. He’s also done all this in limited time due to blowouts. Last week Dalinghaus had 30 carries for 216 yards and six touchdowns. His effort on defense was every bit as good as he racked up 12 tackles (1 TFL) and two fumble recoveries as the Wildcats defeated St. John’s Tipton, 60-14.

This isn’t the first taste of success on the football field Dalinghaus has had either. He also shined last fall in which he had 110 tackles and an interception. He also added 695 yards rushing with 13 total touchdowns. Dalinghaus was an immediate impact player from the time he entered high school as a freshman two years ago. He registered 46 stops and another 430 rushing yards (7 TD) as a freshman in 2016.

Dalinghaus is a standout in multiple sports at Frankfort. He took 5th place last spring in the 110 hurdles as the 1A state meet and 6th place in the pole vault as a sophomore. He also averaged over nine points per game for the basketball team last year. He was also a rare cross-country runner for football player, helping his team to a second-place finish in 2016 and fourth place finish last season. He also gets it done in the weight room where he took fourth place in 1A squat last year with 325 pounds. He is now up to 350 pounds on the squat as he weighs just 165

Frankfort, under third year head coach Nick Anderson, has been impressive so far in 2018 after a 4-5 campaign in 2017. Frankfort has allowed 52 points in the 6-0 start and has scored 342.  As we mentioned before, the last time Frankfort went 6-0 was 1996. That year the Wildcats also won the 2-1A state championship. Now the Wildcats play in 8M-II and the schedule will certainly get tougher over the next few weeks. On that schedule is Axtell (5-1) this week and state power Hanover (6-0) the following week.

In addition to Dalinghaus, Brandon Bussman is having a breakout year on the defense averaging nearly 10 tackles per contest. He’s also second on the team in rushing. Brian Joseph and Carson Schreiner are also putting up nice stats defensively through the first six weeks.

We caught up with the rising 8M-II breakout year below in the latest Q&A edition of Faces in Kansas as Frankfort is looking to make the playoffs for the first time since 2011.

This feature is presented by First National Bank in Frankfort and the Frankfort High School Booster Club. Best of luck to the Wildcats in 2018. See our ad in the top right corner.

I started in junior high and just really enjoyed playing .

To make a deep run the playoffs.

We definitely have a shot to make a run we have a lot of guys dedicated to this team and have been in the weight room.

Offensively I run hard and I am ready to deliver a hit.  Defensively I like playing the outside backer so I can read the play and come up and make the stop.  I think hitting the weight room over the summer has helped.

We have been getting a lot bigger crowds at our games and everyone is excited to see what we are going to do.  We have pep rallies are Fridays and get the elementary involved and want them to see how hard we work and that they can be there someday also if they work hard.

It is a fast paced game and we have a bunch of guys that are putting it all out there and have each others back.  We play hard for each other and our team.

Carson Schreiner is really quick he can out run almost everyone

Probably just being able to hit people at full speed.

I play basketball and run track and field

Coach Anderson always pushes us to be our best and talks about being a better man and family is the most important.  He is always adjusting things to give us the best advantage in a game.

We really hit the weight room hard and everyone put lots of time .

I some interest to play next level.  I haven't had anyone show interest yet.

I like fishing, boating, working on my grandpa's farm, and spending time with family.

GPA 3.9, math and weight training,  I am a pretty good student.

My grandpa, he is the hardest worker I know even though he only has one arm.