v Faces in KS: Dalton Harvey - Sports in Kansas 
Warning: include(../includes/bodytag.php): failed to open stream: No such file or directory in /home/kansass/public_html/ks/news/index.php on line 36

Dalton Harvey is having a breakout 2018 campaign for 5-0 Chapman. (Photo: Shasta Acheson) 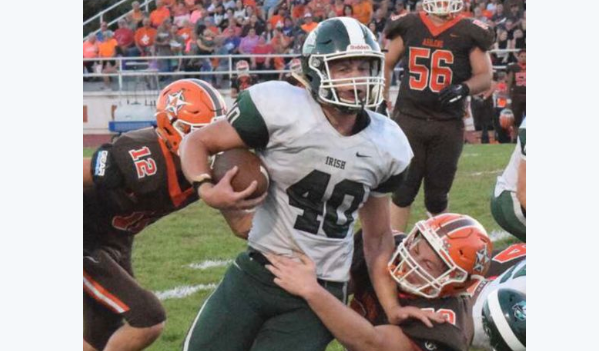 Chapman senior Dalton Harvey is having a breakout year in Class 3A for the undefeated Irish (5-0) after the first five weeks of the season.

The 6-foot-0, 200-pound, senior, fullback and linebacker, has rushed for 758 yards and on 118 carries with nine touchdowns so far in 2018. He is averaging over six yards per carry. He also has four two-point conversions. Harvey also had a breakout year last year despite the team not having a lot of success, he still managed around 800 yards rushing.

He is also really shining on the defensive side of the football where he has tallied 36 stops with 5.5 sacks through five games.

It’s been quite the turnaround for Chapman and second year head coach Kurt Webster. Last season the Irish went 1-8 and now are a highlighted team people around the state are starting to talk about in 3A.

Chapman has only allowed 26 points in the NCKL this year, 18 of those coming to last years 3A runner-up Marysville, who the Irish beat 34-18 in week one. Not bad for a game they lost 38-20 last season. The Irish didn’t win a league game last year and now have a 4-0 NCKL record.

It’s no secret that the success has been the running game for Chapman and Harvey in 2018. Standout athlete Izek Jackson has also had 478 yards in three games this season, he’s missed two contest with a leg injury, but he’s expected to be back to 100% this week. Chapman is averaging 346 yards of rushing per game and wins the time of possession battle by chipping away for 7.5 yards per carry on offense. With Jackson and Harvey going it could be one of the most dangerous backfields in 3A Kansas. Chapman has only thrown 12 passes all year, completing four of those, one which went for a touchdown.

The Irish will get their biggest test of the season this week in a huge district matchup against Smoky Valley this Friday in Lindsborg. The Vikings are also 5-0 and feature one of the states fastest players in Tim Lambert.

We caught up with the outstanding senior two-way player below in the latest Q&A edition of Faces in Kansas.

I started in the 5th grade and it’s something that I connected with and understood instantly.

I think we have a great shot if we can keep everyone healthy and don’t let up.

Running hard and being a forceful tackler.

It’s great. Everyone from the community and our school give us so much support and love.

We play real physical football and put our hand in the dirt and come right at our opponents.

It has helped shape me into the person I am today, and you can hit as hard as you can without getting in trouble.

It’s fun but can be hard because he holds us to very high standards.

What did you do this summer to become better?

We get up early and went to weights and attended camps.

I’m open to anything but I would like to play at the next level.

Hanging out with friends and playing fortnite.

Being financially stable and being able to support my family.