v Faces in KS: Walker Kinney - Sports in Kansas 
Warning: include(../includes/bodytag.php): failed to open stream: No such file or directory in /home/kansass/public_html/ks/news/index.php on line 36

Walker Kinney has over 1,000 yards passing and just one INT for Blue Valley. (Photo: BVTD Club) 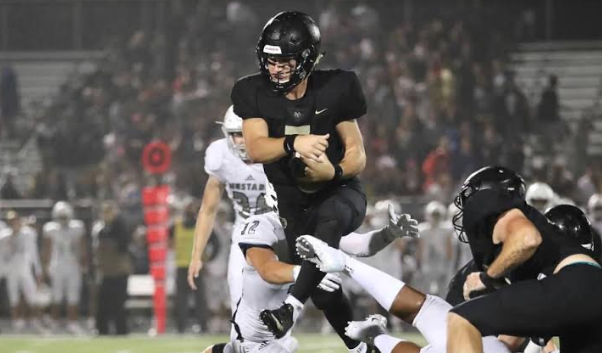 Blue Valley High School senior quarterback Walker Kinney may be one of the most underrated players and prospects in the state of Kansas. The 6-foot-2, 215-pound, big-arm, senior, is off to a huge start over the 2018 football season.

Cameron Green has been the top target this season for Kinney as he has caught 20 balls for 427 yards and six touchdowns through five games. However Kinney has done a nice job to spread it out as six different players on this years team have caught a touchdown pass in 2018. Kinney has also rushed for nearly 200 yards on the ground and may be relied upon to do some with his legs after the injury to all-state hopeful Eric Olson. The Tigers also feature A.J. Totta who was an all-state pick at linebacker last season and was banged up early this year. Beau Palmer has also enjoyed a breakout junior year with 40 tackles and three interceptions and Brendan Barber leads the team in tackles with 44 and has an interception.

“I have to give my offensive line credit. Everything we can and will do is because of them. Love those guys to death. No one person on this team is more important than the next, all the way down to the scout team guys.” Kinney said.

College recruiters certainly have caught eye of Kinney after last season and it’s led to offers. He holds an offer from South Dakota State at the Division I FCS level as a pro-style QB. Missouri Western and Pittsburg State have also offered Kinney at the Division II level. All very attractive programs for the senior gun slinger to go to next year, however we feel like he could be a QB that blows up over the next couple of months with his 2018 season, his arm and his size. He also gets it done in the classroom with a 3.9 GPA.

Kinney is also an accomplished baseball player, earning all-state honors from Sports in Kansas at catcher last spring after BV won the 6A state title. He hit seven triples on the year.

Kinney got involved with football at a young age from growing up a fan and around it. His grandpa and dad both played at the Division I level.His grandpa, Jeff, won two national titles at Nebraska and was a first round NFL Draft pick in 1972. Like Walker, he was also 6'2" and 215-pounds. Walker's dad, also Jeff, played football at Illinois at quarterback from 1989-1992.

While his grandpa and dad have already done it at the highest level its Walker’s turn to shine and he has certainly done that so far in 2018. For now, his goals are getting his team on a deep run in 6A. While many people across the state have dropped off on Blue Valley, we haven’t at Sports in Kansas. We know they are a very capable team and their losses are two likely two of the best programs in the Midwest this year in Rockhurst (Mo.) and St. Thomas Aquinas. And the schedule doesn’t get any easier this week as they take on state power Miege, likely the best team in Kansas who just lost to Rockhurst by one.

“You are tested every single week in this league. We have a shot to make a run this year I have no doubt in my mind. We have dealt with some injuries and adversity but that will make us better in the long run.” Kinney said.

Blue Valley, led by second year head coach Allen Terrell, is one of the best programs in the state over the last 25-plus years with six state titles and seven state runner-up finishes under Steve Rampy and the late Eric Driskell. Blue Valley (3-2) is back in action on Friday against Bishop Miege.

We caught up with the breakout senior QB below in the latest Q&A edition of Faces in Kansas.

My Goal is to Win a 6A State title and to help my teammates get better each day.

No doubt in my mind. We’ve dealt with some injuries, but the adversity will help us in the long run. This team is special.

My competitive nature. I hate to lose. That drive is what helps me prepare week in and week out.

There is absolutely nothing like it. You can just Tell it’s a Friday at Blue Valley High. You can literally feel it in the air. I remember my first Friday as a freshman like it was yesterday. There is such a great Tradition at Blue Valley, not just with the team, but the school and the entire community.

My offensive Line. Everything we can and will do is because of them. Love those guys to death. No one person on this team is more important than the next, all the way down to the scout team guys.

The family aspect. The fact that I can count on any of my teammates to have my back day in and day out. Oh, and the lights.

I play in the 2 time defending state Champion Blue Valley Baseball team. I started at DH my sophomore and at Catcher last year. I have all the respect in the word for Coach Scardino and there’s no question too why we’ve been so successful and it’s because of him.

He always challenges me to be better. A better competitor, teammate, even son. Love the guy.

I woke up at 5:30 Every morning and lifted with my entire team. I got stronger, but I also built those bonds with my teammates. I also worked with Coach Hoover a bunch and I’m a member of #TeamTopSpeed.

Some FCS and D2 schools. My Goal is to play FBS football.

Spending time with my Family and Friends. I also love movies and creating films.

I’d Love to be still playing Football. If not I’d like to be making movies or documentaries in Hollywood.

My Film Class is my favorite, because of all the unique things I get to do. I work very hard in school, my GPA is around a 3.9.

My dad. Hardest Worker I know.

My Co-Captains Alex Totta and Eric Olson are two of the most incredible people I’ve ever met. Alex got accepted into the United States Navy Academy and Eric is planning on going to Air Force. Both are the Hardest working kids on the planet. In my eyes they are the two best football players in Kansas. Unfortunately Eric is out for the season with a foot injury. Regardless, the kid should be getting looks from every college. They also happen to be two of the most humble kids I know, so I know they won’t like me bragging on them, but they’re the two kids that should be faces of Kansas.