v What impressed us after week five of 2018 fball season? - Sports in Kansas 
Warning: include(../includes/bodytag.php): failed to open stream: No such file or directory in /home/kansass/public_html/ks/news/index.php on line 36

What impressed us after week five of 2018 fball season? 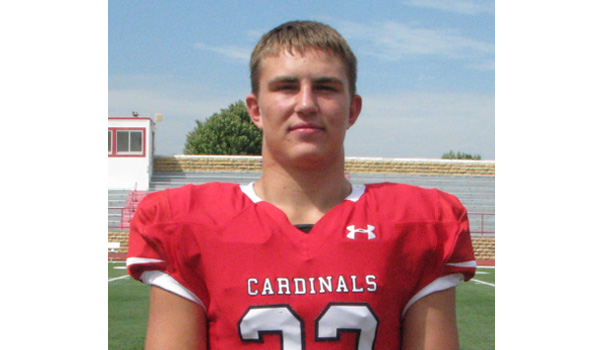 Blue Valley North quarterback Graham Mertz returned from his injury and led the Mustangs to a 41-16 victory against Mill Valley. He tossed two early TD passes as BVN captured its second straight victory.

Olathe West earned its first win in school history with a 40-14 victory against Shawnee Mission West.

Salina Central running back Taylon Peters finished with three touchdowns and 285 rushing yards – all in the first three quarters – as the Mustangs earned a quality 48-17 win against Campus.

In the preseason, Salina South coach Sam Sellers thought junior Ty Garrett would be a breakout player. A starter since his freshman year, Garrett shined against Derby on Friday with 13 catches. He broke the single game school mark of 10 catches set by Barry Warner against Hays in 1985.

Maize’s defense shutout its first four opponents. On Friday, the Eagles beat Goddard, 27-2, and still have not allowed an offensive touchdown. Maize fell down 2-0 in the second quarter before scoring 27 straight points.

Hays High’s Hayden Brown finished with six total touchdowns, including five in the first half. He had 15 carries for 154 yards and five scores, along with a 77-yard kick return touchdown. Brown scored on four straight touches in the first half.

Newton quarterback Colton Davis delivered six rushing touchdowns in a 42-35 win against Hutchinson. It marked the first time the Railers defeated Hutchinson since 1997.

Tank Young had another big game for Aquinas with 23 carries for 176 yards and five touchdowns. He helped the Saints rush for 433 yards in a 53-7 victory versus Blue Valley West. Young became the first back in Kansas with over 1,000 yards on Thursday.

Goddard-Eisenhower quarterback Collin Mackey finished 9 of 13 passing for 224 yards with two scores and rushed 10 times for 137 yards and a touchdown in a 49-29 win at Arkansas City.

Bishop Carroll launched a big late comeback and defeated Great Bend, 36-33. Carroll again won without starting quarterback Cade Becker, who went out early with an injury. The Golden Eagles’ defense held up late when it stopped the Panthers on goal-to-go and forced a field goal. Great Bend missed the field goal and Carroll moved to 3-2.

Bishop Miege fell 14-13 to Rockhurst in a highly anticipated matchup that an estimated 8,500 fans. Midway through the fourth quarter, Miege scored and decided to go for a two-point play. Rockhurst was caught off guard and had just nine players on the field on the conversion, but did stop Miege. However, great credit to the two programs for scheduling the contest for the first time since the mid-80s and Holmes’ gutsy call late to try to earn a victory.

In a unique matchup, Class 4A Abilene defeated 1A Pittsburg Colgan, 22-20, at Towanda-Circle. The Panthers have lost two straight after a Week 4 defeat to Centralia. Abilene is just 2-3 but its defense has been solid with just 66 combined points allowed in four of the games.

Beloit’s Tate Ahlvers collected 35 carries for 264 yards and five scores in the Trojans’ long drive out west for a 52-14 victory against Goodland. Beloit, fighting injuries at key positions including quarterback, rushed for 400 yards.

Cimarron’s Anthony Erives recorded 15 carries for 249 yards and four touchdowns and one catch for 35 yards as the Bluejays defeated Sterling, 74-19.

Sabetha junior Gabe Garber recorded five total touchdowns with 128 rushing and 118 passing. The Bluejays moved to 5-0 with a 49-7 road win against Hiawatha.

Clearwater won 49-12 at Haven behind 209 rushing yards and five scores from Tanner Cash. He also had 108 passing and a TD.

Humboldt’s Conor Haviland had five carries for 90 yards and punt return touchdowns of 59 and 79 yards in the Cubs’ 63-0 victory. Humboldt has outscored its last two opponents 136-0 and remains undefeated.

Phillipsburg’s Jon Hunnacutt, nearing the state record for career kicking points, set a new career high and broke a school record with a 52-yard field goal at the end of the first half against Thomas More Prep. The Panthers won 45-0.

Hutchinson Trinity received 30 carries for 133 yards and a touchdown from Aaron Guerrero. Kaleb Hammeke threw a touchdown pass and returned the opening kickoff 90 yards for a score. The Celtics defeated Garden Plain, 20-7.

Belle Plaine defeated Neodesha, 33-27, a week after a one-point victory. BP has won three straight, already has the most wins since 2011. The Dragons fell against Inman in overtime to start the season.

Pleasanton moved to 5-0 in a unique contest. The Blu-Jays, up to 11-man football for the first time in several years, dropped to eight-man for a single contest and defeated Osceola (Mo.), 38-22, on the road.

Centralia, after an 0-2 start, picked up another key 1A victory with a 36-22 home win versus Troy. Just like last season, the Panthers took some early losses but have proven themselves against competition in its own class. Centralia had a key interception that led to a long Kamble Haverkamp run late. Two weeks ago, Centralia defeated Colgan.

Jackson Heights bounced back from its tough 20-18 Homecoming loss to Olpe with a 22-14 road win against Valley Heights. The Cobras are three-quarters through a highly difficult month. In Week 3, JH won 14-0 at Maur Hill. Next week, JH goes to Troy.

South Central’s defense delivered another big performance in a 59-14 road win against Medicine Lodge on Thursday in a high-profile matchup. SC has had a top-10 scoring defense in Division I the last two years. The T-Wolves contained ML’s passing attack that featured the state’s leading passer in Garrett Burden and top receiver with Dakota Bayliff. Sophomore Jonny Robles had 10 tackles, and junior Eli Jellison had a huge game with 3.5 tackles for loss, including two sacks. SC defended 12 passes and picked off two attempts.

Leoti’s lineman quartet of seniors Jesse Hermosillo, Blake Hernandez, Oscar Jiminez and sophomore AC Hermosillo opened up huge holes in the Indians’ 58-12 road win against WaKeeney-Trego. The Indians moved to 4-1 as Kayde Rietzke delivered 183 yards of total offense, and Jesse Gardner finished with 186 rushing yards. Defensively, Jesse Hermosillo recorded a tackle for loss, forced fumble and fumble recovery all on the same play to set up a short field and score.

Oswego’s Jace Wilson scored seven touchdowns in the Indians’ 38-34 victory against West Elk. He finished with 20 carries for 278 yards and six scores, had a 29-yard scoring reception and recorded nine solo tackles.

Hill City’s Conner Born delivered another multi-faceted game with 127 passing and 124 rushing yards  with four scores accounted for in the Ringnecks’ 51-6 victory against Stockton.

In the first matchup in school history between the longtime small-school powers, Clifton-Clyde got out to a big early lead and held off Victoria, 54-30. C-C has earned quality wins at Hill City and Victoria the last two weeks, stands at 5-0 and in significant control of District 7.

Senior Caden Bach, in place of quarterback Nick Stutsman who missed the contest, stepped in under center for Northern Valley in a 50-0 victory against Wilson. He had eight carries for 122 yards and completed 2 of 3 passes for 48 yards and a TD.