v Faces in KS: Daiken Stallbaumer - Sports in Kansas 
Warning: include(../includes/bodytag.php): failed to open stream: No such file or directory in /home/kansass/public_html/ks/news/index.php on line 36

Daiken Stallbaumer of Hanover is looking for a 3-peat in 8M-II. (photo: Marie Bruna) 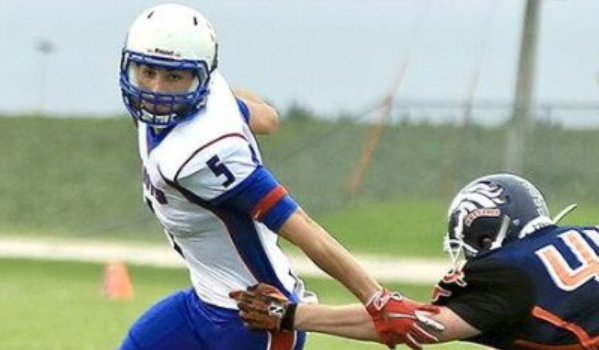 Hanover High School has been a powerhouse in 8-man football in recent memory, for that matter it’s a title town in most of all sports in the 1A classification for boys’ and girls’ sports.

It’s no different in 2018 for the Wildcats as they remain the number one football team in 8M-II after winning each of the last two state titles in the classification. A big reason for a lot of that success is senior quarterback Daiken Stallbaumer

Stallbaumer, the oldest of 10 children in his family, is a 6-foot-1, 195-pound, senior quarterback and defensive back, that is one of the top two-way players in 8-man football. Last year Stallbaumer had over 1,100 yards passing and 750 rushing yards with 29 combined touchdowns, while only throwing one interception in replacing record breaking quarterback Will Bruna, a 2017 Hanover grad. Stallbaumer did all that in limited action due to Hanover outscoring opponents 704-to-148 on the way to going 13-0 in 8M-II. He also had two interceptions as a defensive back in 2017, the same number he has through four weeks this season. As a sophomore, he was an all-state pick as a defensive back and had 10 interceptions in 2016 as the Wildcats won the 8M-II title.

Hanover (4-0) has outscored opponents 167-to-6 through four weeks with one of the games being a forfeit (BV-Randolph, 1-0) as they returned four starters on offense and four on defense including Stallbaumer, Carter Bruna, Cade Cohorst and Jonah Weber. Thomas Atkins, an explosive athlete you hear a lot of basketball, also has big time playmaking ability for the Wildcats. Other key players are Pete Peters, Justin Nagele, Gavin Pralle, Dayton Shockley and Taegan Schwartz.  The Wildcats are on a 29-game winning streak and get it done with a total team effort.

“Every player on our team is valuable, whether that is a senior starter or JV players giving us good looks at practice every week. I don’t care about any accolades and neither does anyone else. We care about winning as a team.” Stallbaumer said.

Stallbaumer is also a part of the basketball team as they finished runner-up last season in 1A-I and won it all in 2017 when he was sophomore. He’s also a track athlete but had to miss last season recovering from a shoulder injury.

And it’s not just the football team with success either, the boys  basketball team, led by Kim Lohse who has six state titles in his career, took runner-up last season. The girls basketball team, led by Chris Beikmann, team has won back-to-back titles and girls track also won the 1A title last May. The boys and girls basketball team could be one of the favorites in the new loaded 1A classification however Central Plains does drop down to the class after winning 1A last year in both boys and girls. The girls return all state selection Macy Doebele while the boys have all state selections Carter Bruna, Thomas Atkins and Pete Peters back.

While Stallbaumer is focused on bringing another state football title to Hanover as they look for a 3-peat he knows you only have one opportunity to be a high school kid and enjoy high school sports.

“You have to have fun and win. I think that if you don't have fun with what you're doing, it doesn't really serve a purpose. And winning is an easy way to have fun.” Stallbaumer said.

The Wildcat football team is back in action this Friday as they take on Onaga (0-4) at home.

We caught up with the outstanding senior athlete below in the latest Q&A edition of Faces in Kansas.

My dad and uncle played in college. I was introduced to it at a young age. And I've been in love with it ever since.

My main goal is to win a state championship. Any accolades that come aren't too important to me.

Yes. I think we have a good shot to make a championship run.

Being able to find the crease that the offensive line gives me. Or my receivers getting open so i can get them the ball in space.

Everybody in our small town loves the sport and comes to support. We've always been a sports town.

We score a lot of points. And we're a very explosive team.

Everybody is a key part of our team. Whether they're other starters or our JV who gives us a look all week. Everybody helps make each other better.

I play basketball and run track. We were able to win a state basketball title my sophomore year. And we got runner-up last season. I didn't run much track last year because I was recovering from a shoulder surgery.

It's a lot of fun. They have a lot of knowledge about the game. They know the schemes they want to run to counter the opposition. So we're able to have some fun during practices, but they're also very serious when they need to be.

Coach Heuer is also our strength and conditioning coach as well. We all lift during the summer and play some 7-on-7 to build team chemistry.

I have a couple of thoughts but still undecided for now.

Have fun and win. I think that if you don't have fun with what you're doing, it doesn't really serve a purpose. And winning is an easy way to have fun.

Hopefully out of college and have a good job.

I don't really have one. I'm just trying to be the best version of myself that I can be.

I have 9 younger siblings.