v What impressed us after week four of 2018 fball season - Sports in Kansas 
Warning: include(../includes/bodytag.php): failed to open stream: No such file or directory in /home/kansass/public_html/ks/news/index.php on line 36

What impressed us after week four of 2018 fball season 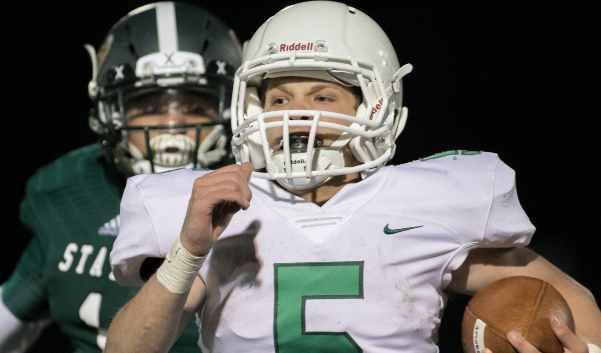 The Trailblazers are 4-0 for the first time since 2010 and are the only undefeated team on the 6A East. Only four remain undefeated in 6A with Free State, Derby and Manhattan also being undefeated on the West. While record doesn’t always matter to pick up a win or loss, it will matter in seeding for week nine of the playoffs. Right now, Gardner has that one seed but still a lot of season left but the way their schedule sets up they could have a very good record by week nine. Nice 27-21 win over Olathe East for first year head coach Ryan Cornelsen that inherited a team on a 10-game losing streak.

The Derby defense has been outstanding in only allowing 19 points all season. The Panthers knocked off Bishop Carroll 24-6 on Friday. Hunter Igo is a football player that is clutch as always and can play anywhere, starring on the defense this season and serving as the backup quarterback. Just as he did last year and this year after Adler was knocked out early in the game, Igo stepped up with over 100 yards passing and 50 yards rushing in the contest to give the Panthers a spark. Derby is one of three undefeated teams on the 6A West.

Shields has had a breakout 2018 season in which he has caught 28 passes for 520 yards with six touchdowns for the Falcons that are off to a 3-1 start. Jai Haynes is also having a breakout year on the defensive side of the football with five interceptions.

Lamfers had 4 TDs, 1 passing, 1 receiving, 2 rushing including 177 yards rushing for BV Southwest in their 35-26 win over BVNW.

After suffering a loss in week one to a team that was on a 10-game losing streak a lot of people dropped off on SME. However, the team that beat them winds up being the only undefeated on 6A East in Gardner Edgerton. SME has looked nice over the last three weeks and are on a three-game winning streak. The defense, led by Tyler Stottle and P.J. Spencer, has only allowed seven points the last two weeks.

The Indians are one of three teams undefeated on the 6A West and dominated Washburn Rural 44-7 on Friday night in Topeka. Kevontae McDonald has been huge all season for Manhattan and is one of the top backs in the state.

Steve Rampy, head coach at Lawrence High, and Zach Rampy, head coach at SM North, got their first wins of the season in week four of the football season, Steve’s coming on Thursday and Zach’s on Friday. Steve is Zach’s father and was a long-time state championship coach at Blue Valley in the 1980s, 1990s and 00s and former National Championship offensive coordinator at Pittsburg State before taking the Lawrence job this season. Zach, a former Simone Award winning QB at Blue Valley, got his first win as a head coach in his first year at SM North on Friday. SM North was down 13 with 2:48 left in the game and would beat Olathe West 35-34, thanks to an onside kick.

Another week and another win for Randy Dreiling and the Saints. This offensive line unit may be one of the best units he’s ever had at Hutchinson or Aquinas. Sophomore Tank Young has been the star this year with nearly 900 yards rushing on the season. He went for over 230 with three scores on Mill Valley as the Saints won 24-13 at home on Friday night.

Its not surprising that Maize is undefeated but really surprising that they have allowed zero points so far this season. Caleb Grill has been as good as advertised and Caden Cox has been a game changer out of the backfield for the Eagles as they blanked Newton 45-0 on Friday. Only three teams remain undefeated on the 5A West with Maize, Wichita Northwest and Kapaun.

We certainly think Aquinas is by far the 5A East favorite at this point but only two teams remain undefeated with Aquinas and DeSoto. After those two undefeated everyone else has at least two losses so these playoffs and seeding could certainly be interesting. Seven teams are 2-2, five teams are 1-3, two teams are 0-4.

Jahawn Byrd of Leavenworth had 7 touchdowns tonight vs Turner. 340+ yards on the ground and a 75 yard kickoff return touchdown.

Central hasn’t been 3-1 since the 2011 season. Why is the 3-1 start impressive? Because they didn’t win a game in all of 2016 or 2017. Taylon Peters has been a big-time impact player and had six touchdowns and over 250 yards rushing on Friday night in the 62-20 win over Hutchinson. Hats off to Mark Sandbo, maybe the most impressive coaching job in 5A so far this season.

Stallbaumer had a lot of success as Lyndon and has had the same at Basehor Linwood picking up win number 100 in his career on Friday night as they dominated Shawnee Heights, 50-0.

Circle ended a 19-game losing streak that dated back to September of 2016 with their 20-10 victory over Rose Hill on Friday night.

Despite a loss you have to give some credit here to a Fort Scott team that has improved throughout the season and took 4A Pittsburg down to the wire in a rivalry game. Pittsburg won on a 22-yard field goal with 1:19 remaining in the game.

Taybor Vetter of Wamego had four touchdowns tonight, this is one of them here. Featured on Faces in Kansas in preseason and one of the best return men in the state.

Parsons is 4-0 for the first time since 1990 under first year head coach Kurt Friess. The Vikings schedule will get much tougher but so far their team speed has been too much for anyone they’ve faced. They dominated Baxter Springs 49-0

Galena, led by head coach Beau Sarwinski, has dominated opponents 185 to 30 this season on the way to going 4-0. The Bulldogs dominated 47-0 tonight over last year’s 4A-II state runner up Frontenac. Program has a lot of kids that are tough and play hard. Team to watch in 3A East once again. The Bulldogs feature a loaded backfield with Shelton, Helton and Lawson.

Sabetha wins rematch of 3A championship, 36-12, over Marysville tonight to open up district play. 35 more points scored in this one compared to the 7-6 finish in last years title game.

After tonight’s win over Jayhawk-Linn, Humboldt is outscoring its opponents 219-19 (+200) on its way to a 4-0 start. And not that it matters but probably the best stadium in 2A.

The Lancers entered 2018 on a 28-game losing streak. They now have a 3-1 record after the first three weeks including back-to-back wins over Yates Center and Northeast Arma. The Lancers haven’t been 3-1 since the 2012 season under then head coach Clint Rider. Nice start for Jerrad Hansen and the Lancers in 2018. Southeast hasn’t allowed more than eight points in a game this season and has only allowed 27 all season.

His older brother, Josh, was the star of the team last year but now its sophomore Tate Seabolt’s turn. The running back has put up some of the best numbers in 2A this season rushing for 663 yards and eight touchdowns in the Bluejays 3-1 start under second year head coach Greg Koenig.

Schmidt picked up win 100 at Olpe on Friday as the Eagles defeated Jackson Heights 20-18 in the 1A showdown. Olpe improved to 4-0 on the season. Schmidt has one state title in 2014.

The Cardinals improved to 3-1 with a big league win over previously unbeaten Sedgwick. The Ell-Saline defense limited the states leading passer Hooper Schroeder to around 150 yards in the contest. Nick Davenport also had 150 yards rushing in the game and is one of the best two-way players in the classification.

Issac Gore big night for Centralia with over 200+ yards rushing as they shutout Colgan 20-0 at home on Friday. Colgan entered 3-0, dominating three 3As. Centralia limited Colgan to less than 70 yards. Centralia is a scary, scary 2-2 team in 1A with a lot of size on the line. Derek Vandorn is one of the states top lineman.

The Plainsmen went 1-8 in each of the last two seasons and have already won more games this year than they had combined those two last seasons with a 3-1 start in 2018. Oakley defense got a shutout over Goodland. The schedule certainly gets tough for Oakley as they take on defending 2-1A state champion Smith Center this coming week.

Kail Dubbert had a great showing tonight for St. John’s Tipton. 19 carries, 219 yards and 4 touchdowns helping the Blujays to another district win tonight over Southern Cloud. Not a bad last name to have for that program.

The Oilers improved to 4-0 on the year and have had back to back week shutouts and have only allowed 22 points all season. They dominated a Little River squad, 46-0, that entered unbeaten.

Xavier Espinoza, 6 catches, 220 yards, 3 touchdowns all in the half. His goal on Friday was to play for his dad who deployed the same day. Congrats to Espinoza on a huge game.

The Bluejays improved to 4-0 and have only allowed 26 points all season and knocked off previously undefeated A&A 32-12 on Friday night.

Ashland knocked off defending 6-man champion Pawnee Heights on Friday in dominating fashion, 67-21. Ashland, in its first year of 6-man under head coach Ben Fox, improved to 3-0 on the season. Ashland and Golden Plains remain the only unbeaten teams in 6-man.

The Bulldogs beat last year’s runner-up Cheylin 92-47 on Friday night. They have scored at least 48 points in every game this season. Running back Dylan Spresser has been a highlight reel this season with 710 yards rushing and 18 touchdowns.